Documentation and examples for R Tools for Visual Studio

Thank you for trying out R Tools for Visual Studio (RTVS) 0.4!

The rest of this document takes you on a tour of the new features in 0.4. Please try them out and let us know what you think!

You can now view multiple data frames in separate Data Table Viewer tabs. Using Visual Studio’s window layout features, you can drag the tabs to arrange them side-by-side as well:

You can now sort columns in the Data Table Viewer. Clicking on a column header will toggle through ascending, and descending sort order for that column. If you hold down the SHIFT key while clicking on column headers, you can define multiple sort orders as well based on the order in which you click the column headers. 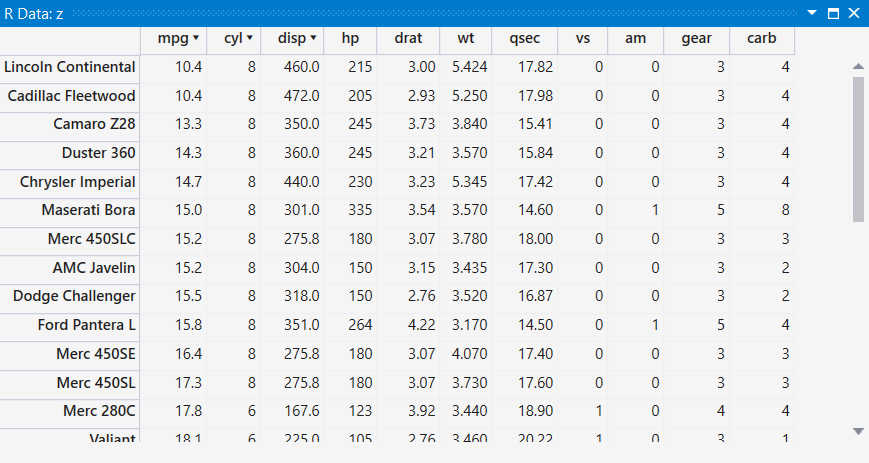 Light bulbs are suggestions that Visual Studio provides for commonly executed actions. We have added support for installing and loading libraries in 0.4. If you hover over a line that contains a library statement in the editor, we will display a light bulb to the left of that line. Clicking on that light bulb will reveal a couple of options, in this case either installing the package or loading it:

Go-to-definition is invoked by pressing F12 when the caret is positioned within the name of a function. RTVS will open up a new editor window with the source of the function displayed within it. Below is an example of examining the source code for the library function. 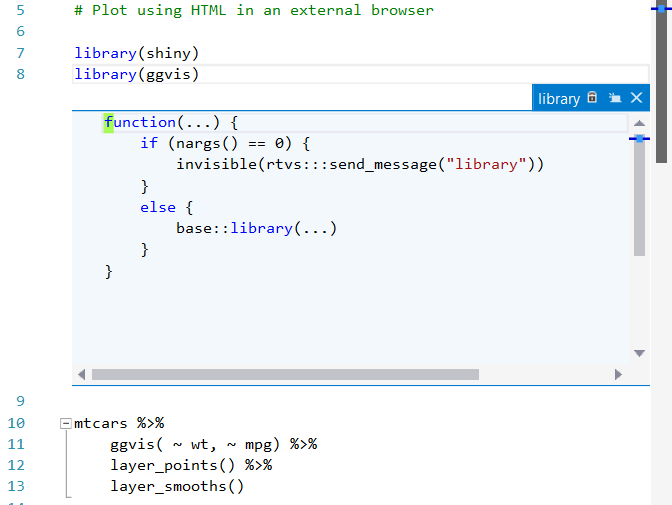 Collapsible code regions are really useful when you want to temporarily hide chunks of code in the editor. You just need to surround the code that you want to create a region around using specially formatted comments. The start of a region is defined by a comment with a trailing set of ---; the comment text will be displayed as the name of the region when the region is collapsed. The end of a region is defined by a comment that contains ----. See an example of this below:

If you’re a frequent creator of RMarkdown documents, you’ll really appreciate our full support for all R editor features within an R code block. Below, you’ll see that we have IntelliSense and the function peek feature displayed within an R Markdown R code block: 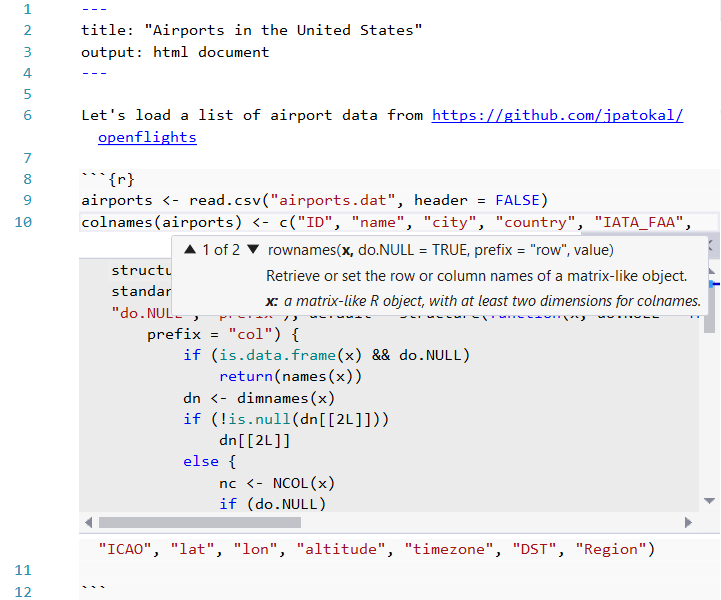 We have also added support for generating PDFs from within RTVS now. All you have to do is ensure that you’ve installed the Miktex library in addition to Pandoc and RMarkdown.

You’ve always had the option of running the help system inside of a Visual Studio tool window, or by launching the help in the default browser for your computer. If you are using the tool window option (which is the default), you now have the ability to type search terms into a separate search input field: 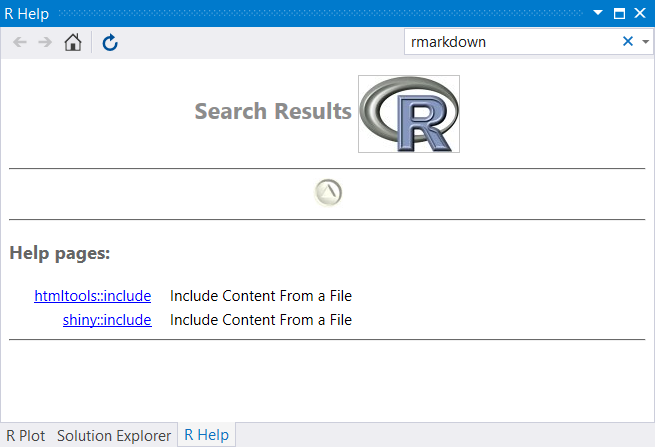 Lots of us run into problems writing our code and turn to the Internet for help. We’ve streamlined this a bit further by incorporating keyword search directly into RTVS. For example, if you were trying to figure out how to use the dplyr filter function in the following code, all you need to do is place your caret on the filter function call, and press F1.

This will bring up search results in a separate tool window. 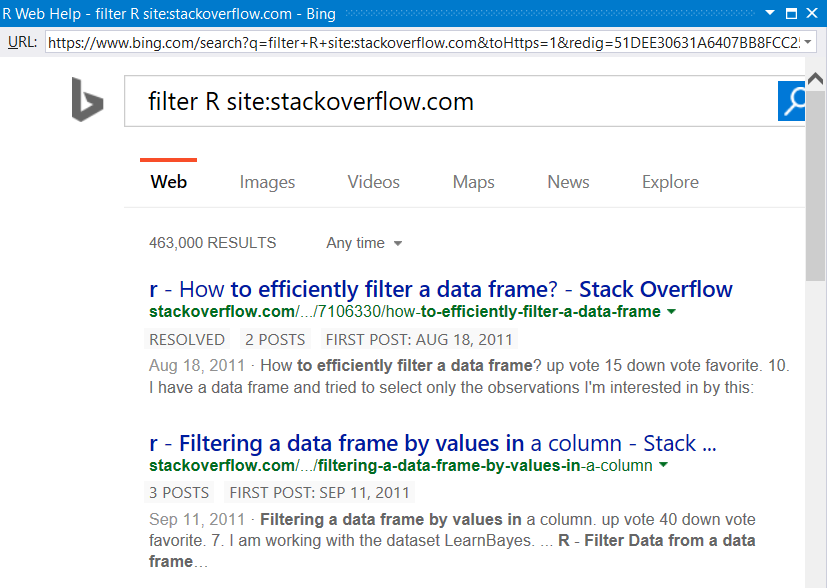 By default we scope the search to Stack Overflow, but you can configure it to search with an arbitrary search clause in the Options dialog for RTVS: 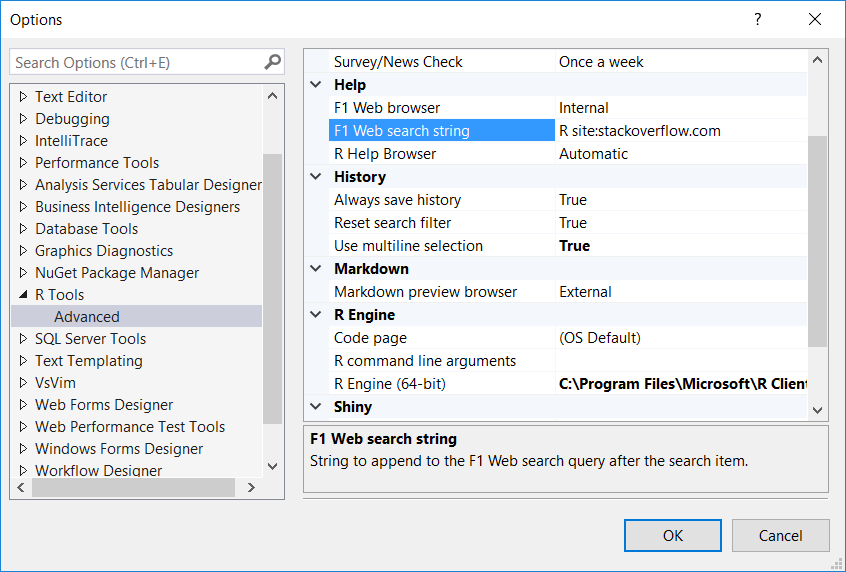 When typing calls to functions that have many parameters, oftentimes you want to line up the parameters to make the code easier to read. We now support remembering the indentation position for your parameters once you’ve told us what it is. From that point onwards we’ll automatically indent to that indentation position when you press ENTER at the end of a line:

There are two new toolbar icons within the R Interactive Window that are also run these commands for folks who are like to use the mouse:

Code snippets now work in both the editor and the R Interactive Window. Below, I’m typing = and then pressing TAB to perform the completion.

We have made some improvements to plotting. First, we support global Windows DPI settings, so for customers who are using high DPI monitors, we will respect the Windows DPI settings when rendering plots so that they aren’t disproportionately sized with respect to the rest of the Visual Studio UI. Second, we also let you quickly see the size of the plot area in vertical and horizontal pixels by hovering your mouse over the image. Here’s what that looks like: 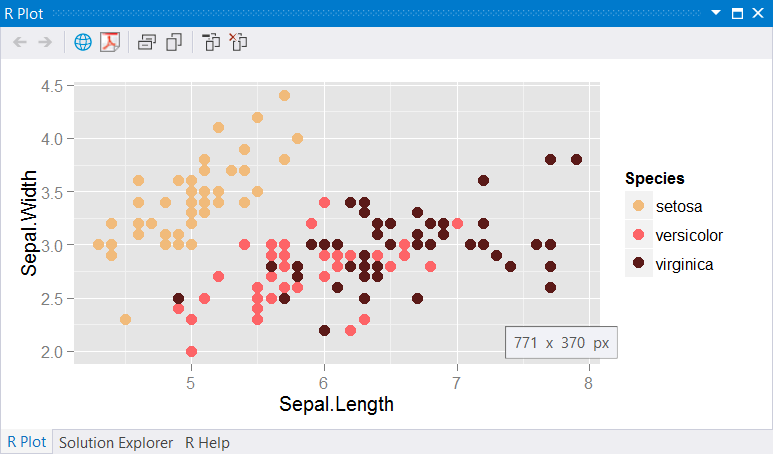 Finally, we’ve added support for the locator API in our plotting window, so that R code that interacts with the user clicking on plots will now work inside of RTVS.

In this release, we’ve added the beginnings of R support for SQL Server. We now let you embed R script files within SQL Database Projects. This feature gives you the full editing experience for R source files within a SQL Database project. You can add both R files as well as a template file that can be used to define a stored procedure that contains a call to the sp_execute_external_script system stored procedure to execute arbitrary R code. 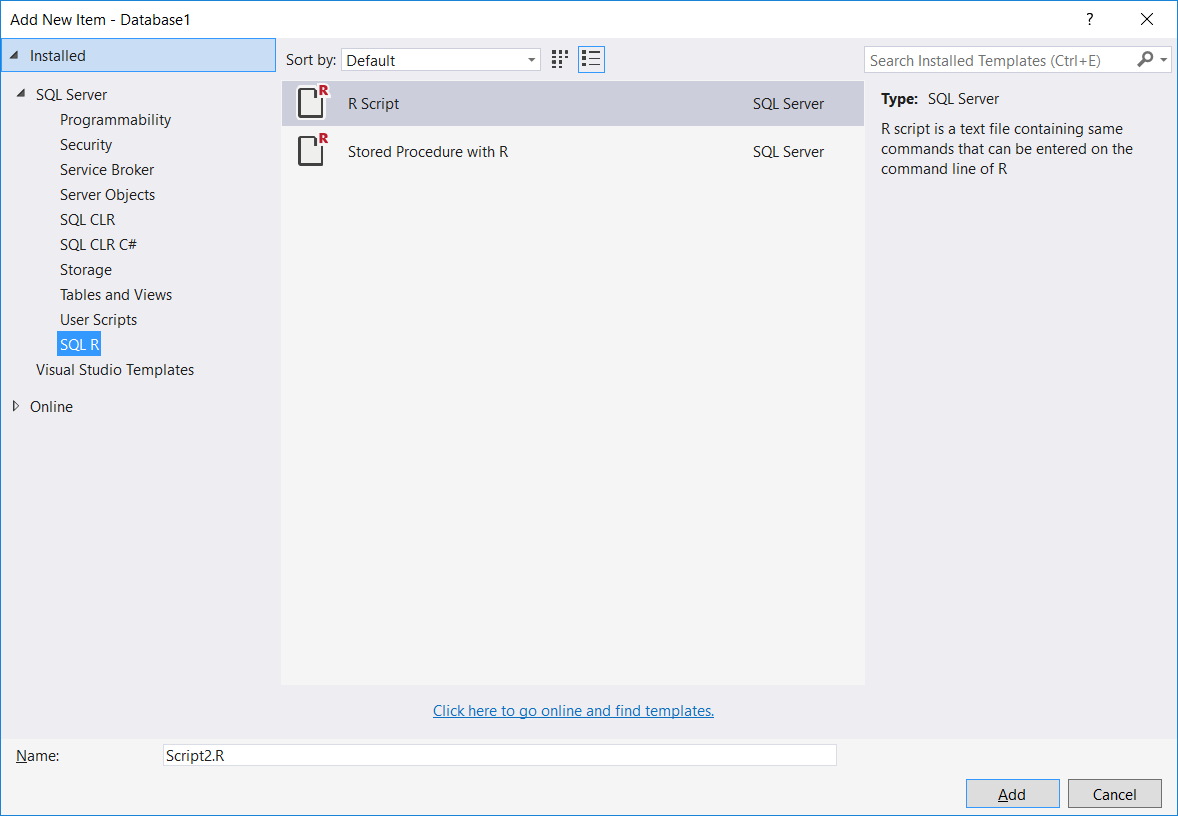 This is what the editing experience looks like in a SQL Database Project. Note that all of the RTVS windows (e.g., R Interactive Window and the Plotting window) are available within the SQL Database project. 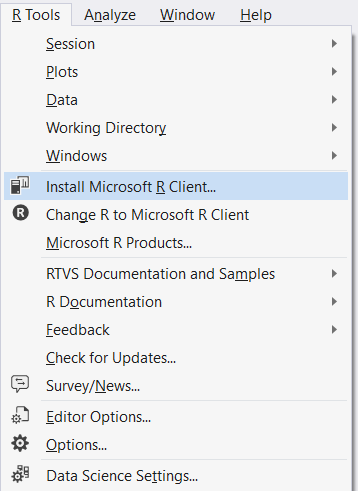 Let us know what you think!

As always, please feel free to send us feedback using our Send a Smile (we like these!) or Send a Frown feature. This document gives you a feel for the highlights of the new features in 0.4. However, we have closed 205 Github Issues since the last release. Feel free to take a closer look using this Github Issues query.