Skip to main content
⭐️ If you like SynapseML, consider giving it a star on GitHub ⭐
This is unreleased documentation for SynapseML Next version.
For up-to-date documentation, see the latest version (0.10.2).
Version: Next

Data Balance Analysis is relevant for gaining an overall understanding of datasets, but it becomes essential when thinking about building AI systems in a responsible way, especially in terms of fairness.

AI systems can sometimes exhibit unwanted, unfair behaviors. These behaviors can cause fairness-related harms that affect various groups of people. They may amplify the marginalization of particular groups whose needs and contexts are often overlooked during AI development and deployment. Fairness-related harms can have varying severities, and the cumulative impact of even seemingly non-severe harms can be burdensome.

Note: Because fairness in AI is fundamentally a sociotechnical challenge, it's often impossible to fully “de-bias” an AI system. Instead, teams tasked with developing and deploying AI systems must work to identify, measure, and mitigate fairness-related harms as much as possible. Data Balance Analysis is a tool to help do so, in combination with others.

In summary, Data Balance Analysis, when used as a step for building ML models, has the following benefits:

Note: If you're running this notebook in a Spark environment such as Azure Synapse or Databricks, then you can easily visualize the imbalance measures by calling the built-in plotting features display().

Feature Balance Measures allow us to see whether each combination of sensitive feature is receiving the positive outcome (true prediction) at balanced probability.

Using the dataset, we can see if the various sexes and races are receiving >50k income at equal or unequal rates.

Note: Many of these metrics were influenced by this paper Measuring Model Biases in the Absence of Ground Truth.

For example, let's assume we have a dataset with nine rows and a Gender column, and we observe that:

Aggregate Balance Measures allow us to obtain a higher notion of inequality. They're calculated on the set of all sensitive columns and don't depend on the label column.

It will not be a stretch to say that every real-world dataset has caveats, biases, and imbalances. Data collection is costly. Data Imbalance mitigation or de-biasing data is an area of research. There are many techniques available at various stages of ML lifecycle: during pre-processing, in-processing, and post processing. Here we outline a couple of pre-processing techniques -

There are smarter techniques to under-sample and over-sample in literature and implemented in Python’s imbalanced-learn package.

For example, we can cluster the records of the majority class, and do the under-sampling by removing records from each cluster, thus seeking to preserve information.

One technique of under-sampling is use of Tomek Links. Tomek links are pairs of instances that are very close but of opposite classes. Removing the instances of the majority class of each pair increases the space between the two classes, facilitating the classification process. A similar way to under-sample majority class is using Near-Miss. It first calculates the distance between all the points in the larger class with the points in the smaller class. When two points belonging to different classes are very close to each other in the distribution, this algorithm eliminates the datapoint of the larger class thereby trying to balance the distribution.

In over-sampling, instead of creating exact copies of the minority class records, we can introduce small variations into those copies, creating more diverse synthetic samples. This technique is called SMOTE (Synthetic Minority Oversampling Technique). It randomly picks a point from the minority class and computes the k-nearest neighbors for this point. The synthetic points are added between the chosen point and its neighbors.

There is an expected and observed value in each table cell. The weight is the value of expected / observed. Reweighting is easy to extend to multiple features with more than two groups. The weights are then incorporated in loss function of model training. 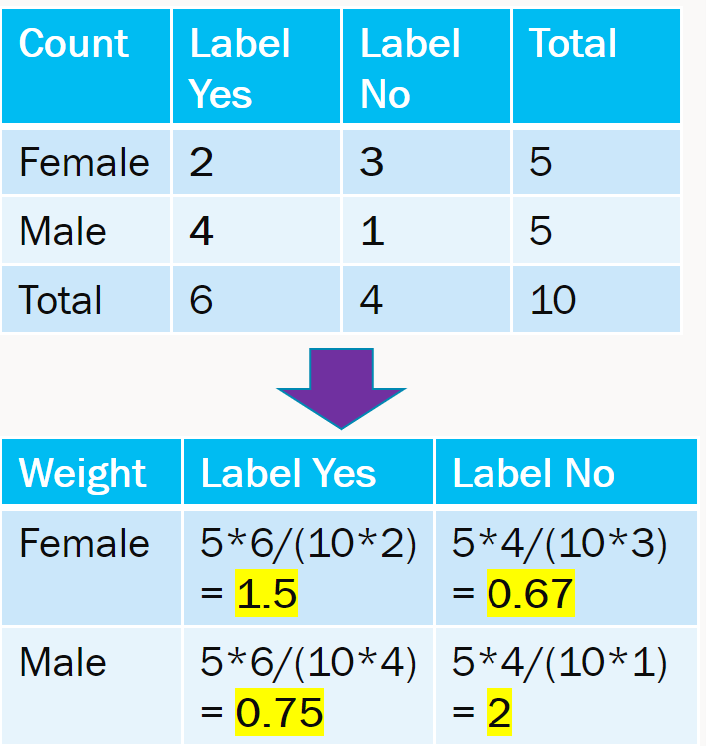