The asynchronous tasks programming model of Coyote is based on the task-based asynchronous pattern. Coyote provides a drop in replacement for the native .NET Task type that works with the async and await C# keywords . To avoid confusion we will use the following terminology:

A controlled Task is similar to a native Task type and can be used alongside the native Task type to easily invoke external asynchronous APIs from your code. We will discuss this in more detail below. 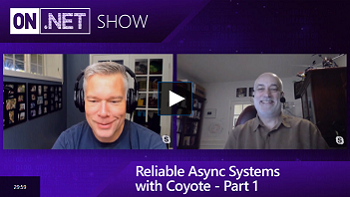 The core of the Coyote asynchronous tasks programming model is the controlled Task and Task<T> objects, which model asynchronous operations. They are supported by the async and await keywords.

This programming model is fairly simple in most cases:

The await keyword is where the magic happens. Using await yields control to the caller of the method that performed await, allowing your program to be responsive or a service to be elastic, since it can now perform useful work while a controlled Task is running on the background. Your code does not need to rely on callbacks or events to continue execution after the task has been completed. The C# language does that for you. If you’re using controlled Task<T>, the await keyword will additionally unwrap the value returned when the controlled Task is complete. The details of how await works are further explained in the C# docs.

What happens under the covers

The C# compiler transforms an async method into a state machine (literally called IAsyncStateMachine) which keeps track of things like yielding execution when an await is reached and resuming execution when a background job has finished.

The controlled Task type uses a C# 7 feature known as async task types (see here) that allows framework developers to create custom task types that can be used with async and await. This is where the magic happens. In production, controlled Task enables C# to build a custom asynchronous state machine that uses regular Task objects. However, during testing, Coyote uses dependency injection to supply a custom asynchronous state machine that allows controlling the scheduling of controlled Task objects, and thus systematically exploring their interleavings.

How to use asynchronous tasks

We will now show how to write a program using the Coyote asynchronous task programming model. As mentioned before, the controlled Task type is a drop-in replacement for the Task type, and thus any prior experience writing asynchronous code using async and await is useful and relevant. If you are not already familiar with async and await, you can learn more in the C# docs.

Say that you have the following simple C# program:

The above program contains a int Value that is updated by the WriteWithDelayAsync method. This is a C# async method that asynchronously waits for a controlled Task to complete after 100ms (created via the Task.Delay(100) call), and then modifies the Value field.

Using Specification.Assert, Coyote allows you to write assertions that check these kinds of safety properties. In this case, the assertion will check if the Value is 5 or not, and if not it will throw an exception, or report an error together with a reproducible trace during testing.

Yes, you can use the .NET thread safe collections to share information across tasks, but not the BlockingCollection as this can block and Coyote will not know about that which will lead to deadlocks during testing. The other thread safe collections do not have uncontrolled non-determinism, either from Task.Run, or from retry loops, timers or waits.

The caveat is that Coyote has not instrumented the .NET concurrent collections, and so coyote does not systematically explore thread switching in the middle of these operations, therefore Coyote will not always find all data race conditions related to concurrent access on these collections. For example, two tasks calling TryAdd with the same key, one task will succeed the other will not, but Coyote will not systematically explore all possible orderings around this operation. You can help Coyote do better by using ExploreContextSwitch.