React Native builds on top of the native platform for every OS it runs on; on Windows, this translates to producing a Universal Windows Platform (UWP) app.

We heard from some of our customers that build times for these types of apps can be pretty long - especially so when building the React Native for Windows framework from source. To mitigate this problem we offer pre-built binary distributions of the framework in the form of NuGet packages. This works pretty well but has a few shortcomings: even when not building the framework itself, building a UWP app requires several build steps behind the scenes (the steps below are what happens for C++/WinRT apps):

We set out to address this since a lot of applications won't need to customize their native code (e.g. by having XAML UI that isn't rendered by RNW); these greenfield applications consist of the bare-bones native UWP app, and all of their app logic is confined to their JavaScript (and whatever native modules they require).

To solve this issue, we came up with a very lean, yet flexible, API that enables a UWP Core Application (the kind that doesn't require XAML, or any interface definition) to host these greenfield apps. We call this API CoreApp. When using the CoreApp API, the React Native for Windows framework provides the required XamlApplication object as well as a simple XAML Page object, which contains a React root view.

This is a new, experimental C API that comes in two flavors:

This API starts a CoreApp, and upon launch, it will call your app back and pass some optional custom data to it as a parameter. The callback enables you to customize a number of parameters, like your bundle name, app name, etc. See CoreApp Schema below for more info.

This API is similar to the previous one but it takes a path to a JSON configuration file. The callback is optional in this case, since more often than not, the configuration file will have all the necessary information.

The launched callback above gives you an output RNCoreApp structure, where you can set a number of parameters, as well as the data parameter that you passed in when you called the CoreApp API.

Below are the properties you can set in your app.config.json, with their default values. These properties correspond to properties on the ReactInstanceSettings type.

For building in Debug mode, your app will usually only need to set a few properties: componentName, and the native modules it uses.

There are a couple of ways that a CoreApp can load native modules.

The simplest way is using the RNCoreAppStartFromConfigJson API. As we saw above, this API allows us to pass an optional DLL name to load and a plain C function to call in that DLL, to produce the ReactPackageProvider for the module. Here's what this function would look like:

This snippet will declare a plain C function (this is important so that C++ name mangling mechanism doesn't come into play, which is required to be able to use the function name in the JSON file), and export it from the DLL (or the application's EXE). It takes no parameters, and simply return a pointer to the package provider for the module.

where MySpecialPackageProvider is the same as above, only that the extern "C" __declspec(dllexport) part is not required since we don't care about the name, or exporting the function.

For a sample, take a look at the Calculator CoreApp NuGet project in /samples/CalculatorCoreAppNuGet.

With the RNCoreApp approach - combined with NuGet distribution - we are seeing extremely fast native builds; builds that used to take 15-30 minutes now are down to 10-15 seconds. Because your application actually has very little native code to build, and all of the native logic is encapsulated for you in the React Native for Windows framework, you can get back to being productive in JavaScript, avoid hard-to-diagnose native code errors, and ship your app more quickly! 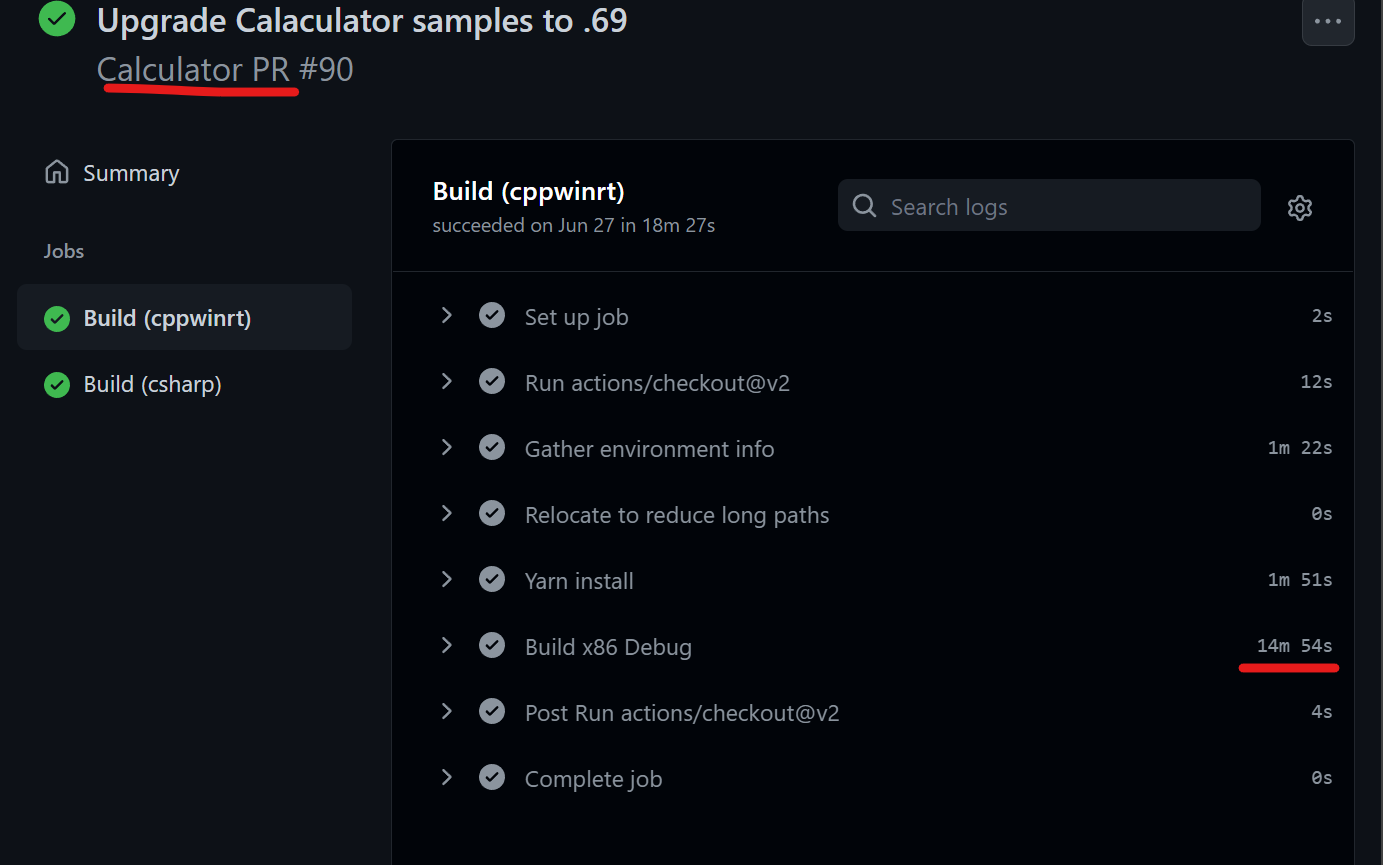 The same app built using NuGet (but not CoreApp), slashes this to 3.5 minutes: 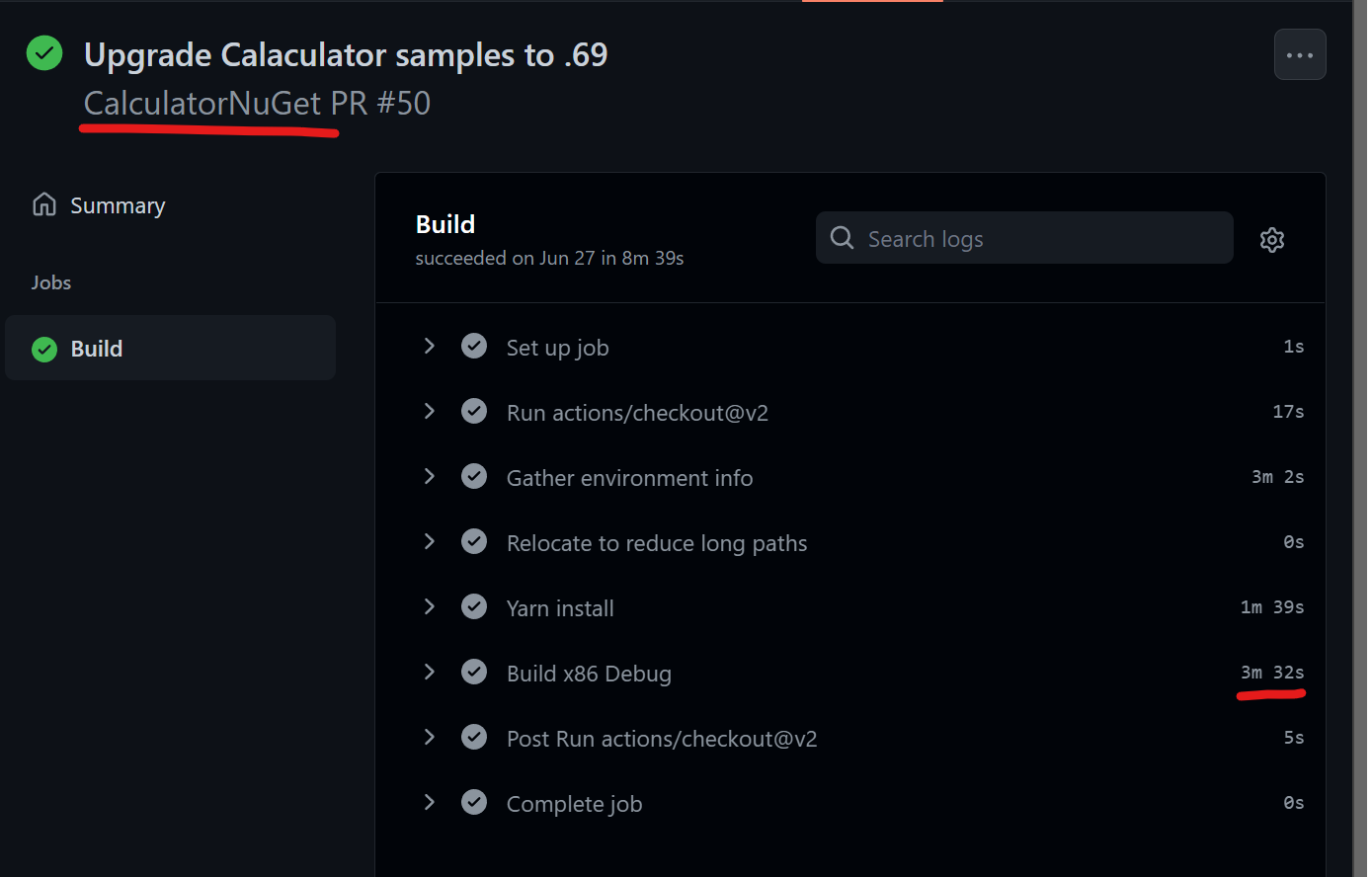 Meanwhile the CoreApp calculator sample clocks in at a speedy 1:49! 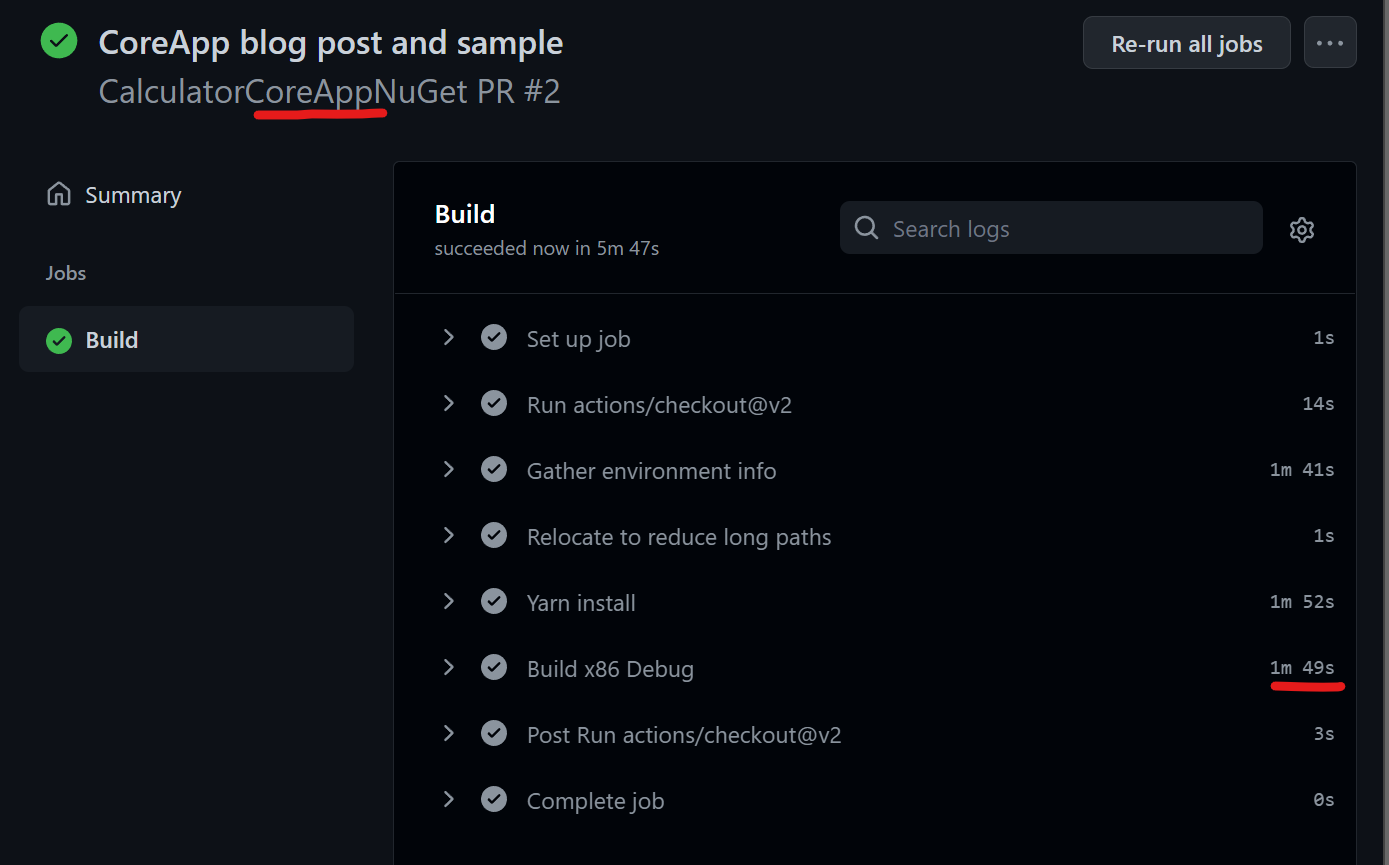 Look for this new API to make its debut in our 0.70 release, or try it today in our canary builds.

If you have any feedback, please don't hesitate to start a conversation on the GitHub repo!