In this report, we describe the process and what we did before, during, and after the hackfest, including:

ICEBERG is an IT startup based in Russia that provides enhanced sporting analytics and data collection through modern computer vision algorithms. This data is used to make better management decisions, uncover players’ strengths and weaknesses, improve the training process, and adjust strategy for game preparation.

ICEBERG’s main expertise is in ice hockey. In addition to services for professional teams, ICEBERG offers products that provide high-quality data for media, gaming, betting, and fantasy sports solutions. It uses optical tracking technology along with activity recognition through advanced machine learning algorithms to transform video into raw numbers. The data is then aggregated and visualized for clients in a user-friendly, state-of-the-art web portal that uncovers insights about the game, players, team, and opponents.

The hockey analytics system is a difficult candidate for the cloud. It consists of resources such as web cams and processing units/servers located completely at some venue (like a stadium). The problem was to understand how we could leverage the cloud for that system, where the cloud could bring benefits, and where we won’t be able to touch any part of the system.

We divided the process of migration into steps:

We wanted to try doing all of that with the minimum amount of new codelines development efforts. We wanted to leverage the platform as a service (PaaS) architecture and check the limits.

As shown in Figure 1, the “architecture before” was the traditional client-server monolithic architecture. Stadium cameras capture the video, process it, and upload for verification and further processing to the Dropbox storage. Java server application serves the role of back end that hosts the REST API for customers who want to access data, visualization gateway for Tableau, and data access layer for PostgreSQL.

While that approach is classic, it does not provide the scalability, agility, and ability to offload some heavy workloads to the services instead of writing its own boilerplate code and deploying its own infrastructure or setting up the hosting resources.

Figure 1. Architecture before the hackfest 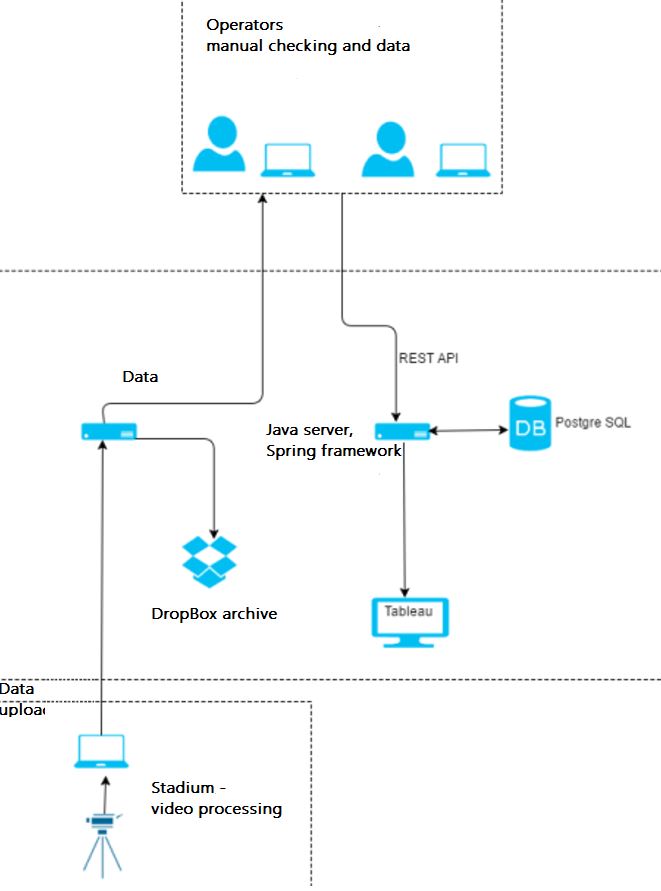 Thinking about what can be migrated to the cloud is a long process that involves assessing both the technical and economical pros and cons of each subsystem.

As we saw, the original architecture consisted of:

At the end of that iteration, we ended up with the architecture shown in Figure 2. 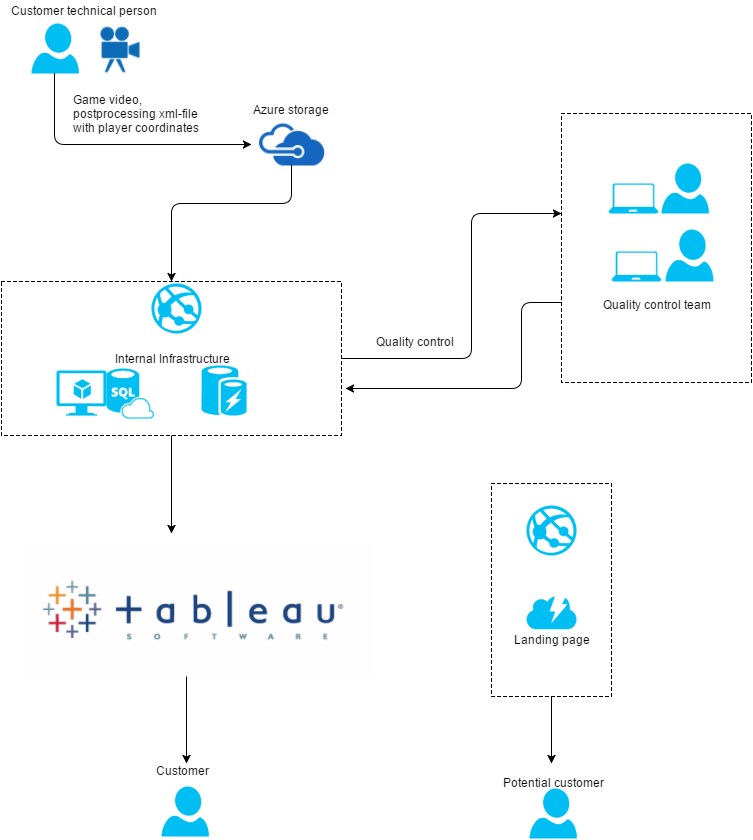 After testing and analyzing the hybrid solution we developed and deployed in Iteration 2, what we had left was the database subsystem (PostgreSQL) and most difficult part to deal with—the processing subsystem. We did not give up on the idea of doing something with the component that was initially designed to work only on-premises.

After that, the architecture looked completely different. 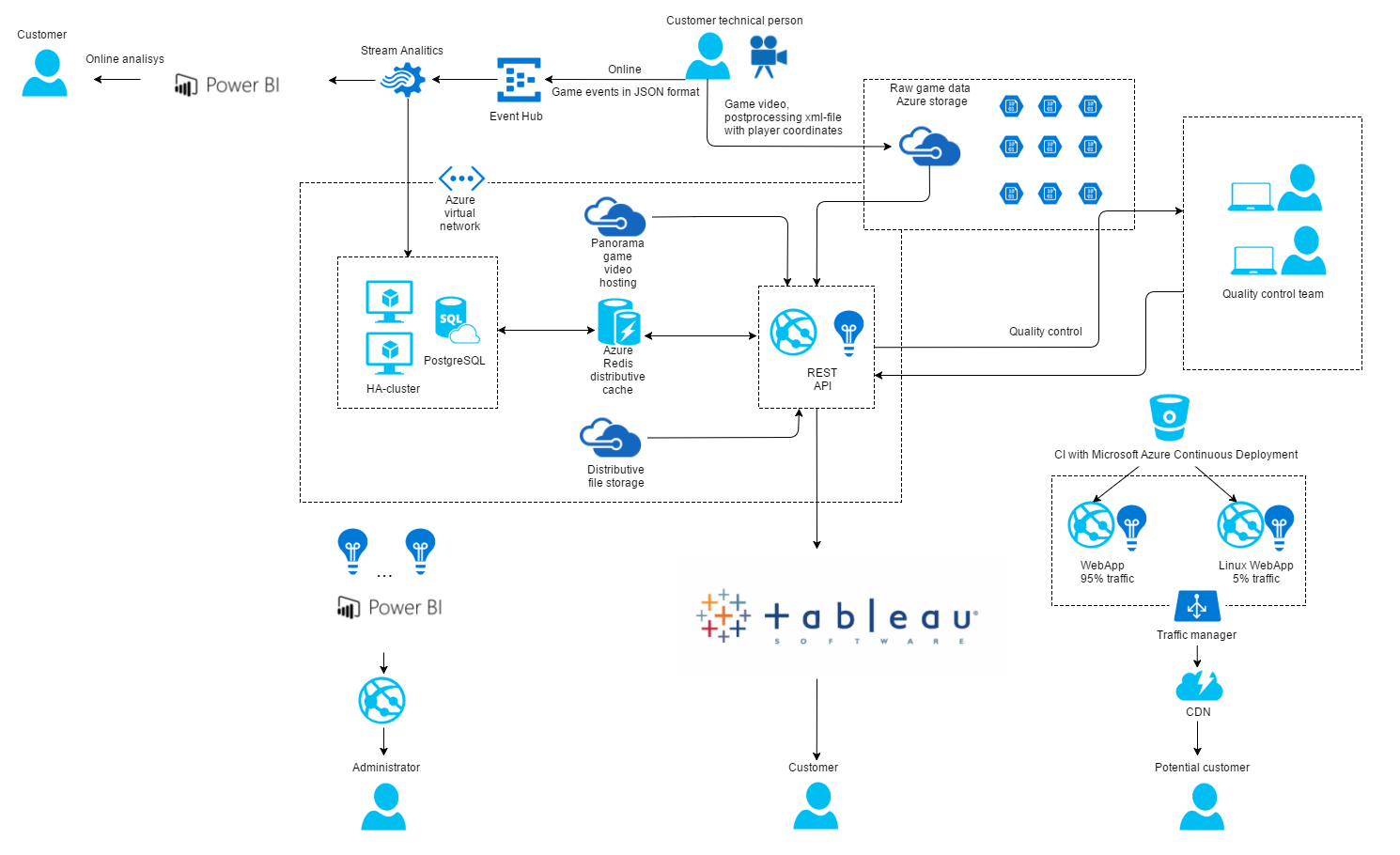 Results of the technical engagement

At the start, the ICEBERG solution was implemented as a classic client-server solution. Its architecture was tightly coupled, and some components (like the Dropbox storage) were not implemented in a scalable and agile way.

During the technical engagement between Microsoft and ICEBERG, the architecture was heavily revamped in such way that critical components would leverage the PaaS benefits (such as health checking and fast deployment) as much as possible to eliminate the chance of any availability issues in the future and delegate their migration to the cloud platform.

The ICEBERG team spoke positively not only about how the cloud platform works, but about how the Microsoft platform works with the Open Source. The ICEBERG system is written in Java and uses PostgreSQL, so for the successful migration it was necessary to be sure that the technologies used are supported and tested in the cloud. Both Java and PostgreSQL can be described as “first class citizens” on Microsoft Azure, and it was one of the important learnings for the team.

“Azure technologies allow ICEBERG to get large data volumes from our clients, who always move around the globe. Secure data transfer, implemented by Microsoft, keeps us from worrying about our customers’ data confidentiality. Scalable cloud architecture based on Azure VMs, Azure Web Apps, and CDN is perfect for the always-growing number of requests from both our current and new customers.”
– ICEBERG team

ICEBERG’s future plans for using the Azure platform include the IoT Suite (for implementing the real-time processing and visualization of Power BI), Stream Analytics, and Azure Machine Learning. The ICEBERG solution is already working in production. The Open Source project, which is working perfectly in the Microsoft cloud, is proof that Microsoft supports Open Source technologies.

After performance optimization, computation takes less than 1 second. This is a great example of how to apply traditional best practices to the cloud deployment.