Booxscale and Microsoft build a bot for their customer Taxicode

Booxscale is “The Marketplace of Marketplaces” creating a transaction platform for on-demand businesses to surface their websites, apps, and technologies for their users.

Booxscale’s main aim during this development workshop was to work with their customer Taxicode to build out a solution that searches for and books a taxi via a bot interface. The key focus was to create a solution that was easy to use and provided a great user experience, allowing users to quickly complete this task while keeping them informed of booking progress and confirmation during all stages of the booking process.

Booxscale worked with Microsoft in a four-day development workshop to utilize the Microsoft Bot Framework (Node.js) to create a taxi-ordering bot that was accessible via the conversational channels in both Skype and Facebook Messenger. The bot can either guide (decision-tree) the user through the process of ordering a taxi (destination, pickup time, and price) or allow the customer to use natural language to query the bot with phrases such as “Can I have a taxi from London Euston Station to the Microsoft office, London Paddington at 2:00 PM tomorrow?” To evaluate this text, the Booxscale team implemented a LUIS model by using Microsoft Cognitive Services.

Booxscale’s mission is to create the next generation transaction platform of aggregated on-demand businesses to surface within publisher websites, directories, apps, and technologies. One example is via surfacing instant book buttons at the right time and placing them within consumers’ mobile, web, and app journeys. Booxscale sees bots as a powerful new offering within the marketplace for their customers (businesses) to offer to consumers.

At the development workshop, Booxscale worked with their customer Taxicode.

Taxicode enables users to book journeys in the UK with approved fixed prices, reliable taxis, minibuses, and coach companies. They offer dedicated account managers and telephone support for their customers, maintaining a 96% customer satisfaction rating from the partners they work with. Their services are available nationwide in the UK (10,000+ minicabs, minibuses, and executive, chauffeur, and coach companies).

Booxscale worked with Taxicode to create a chat bot for release within Booxscale’s Marketplace. Booxscale wants to show that it’s possible to create compelling experiences for users in the technology channels they are already using (such as Skype and Facebook Messenger) by using the Microsoft Bot Framework.

Currently, to book a taxi a user needs to visit the Taxicode website, download an app, and then begin the booking process (via drop-down boxes and text).

The aim of the bot solution is to shorten the length of time it takes a user to complete a taxi booking, allowing them to use the bot in a frictionless way by booking a taxi in the same relaxed, seamless manner that they may use when chatting with a friend.

The main areas of focus in this solution are ease of use, time to complete transaction, constant feedback on progress, and clarification through the process so the user does not feel lost at any point in the transaction.

This problem statement covers the following three areas that Booxscale tries to address in all its Marketplace offerings (also highlighted in the following diagram): 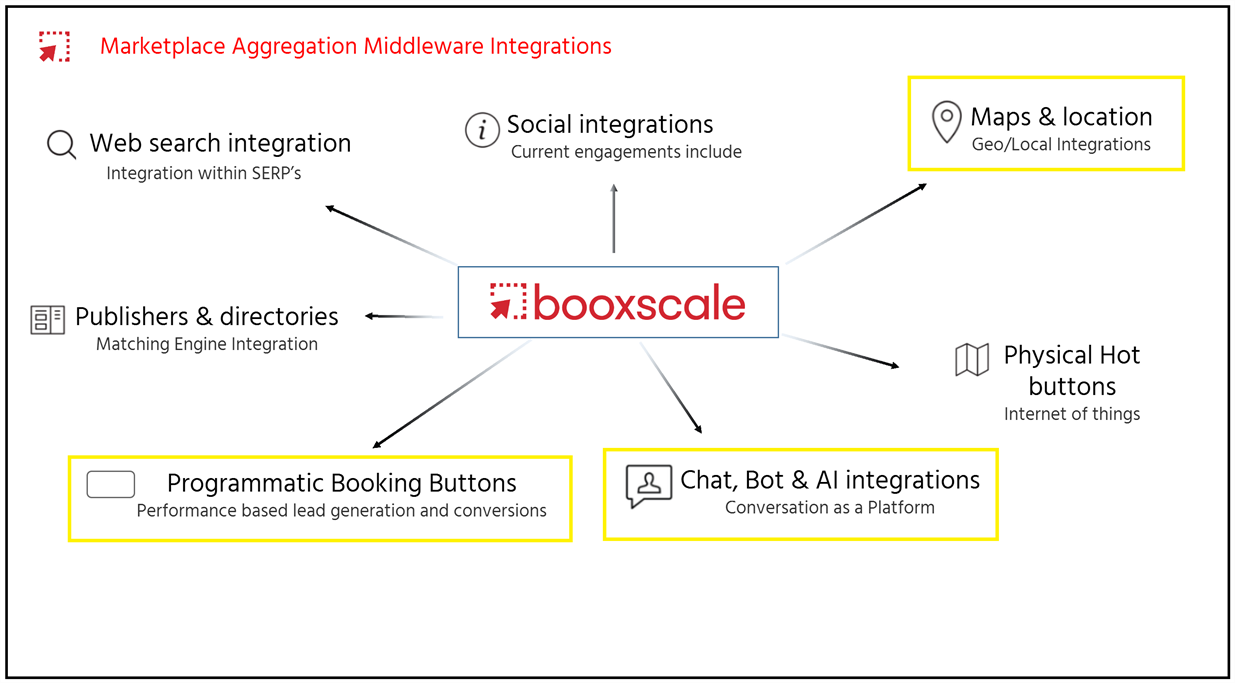 To solve the problem statement, the team set out first to understand the best design and flow of a bot, to make sure they were staying true to the ease and simplicity of the use goal. Some of the questions that were discussed during this initial stage were: 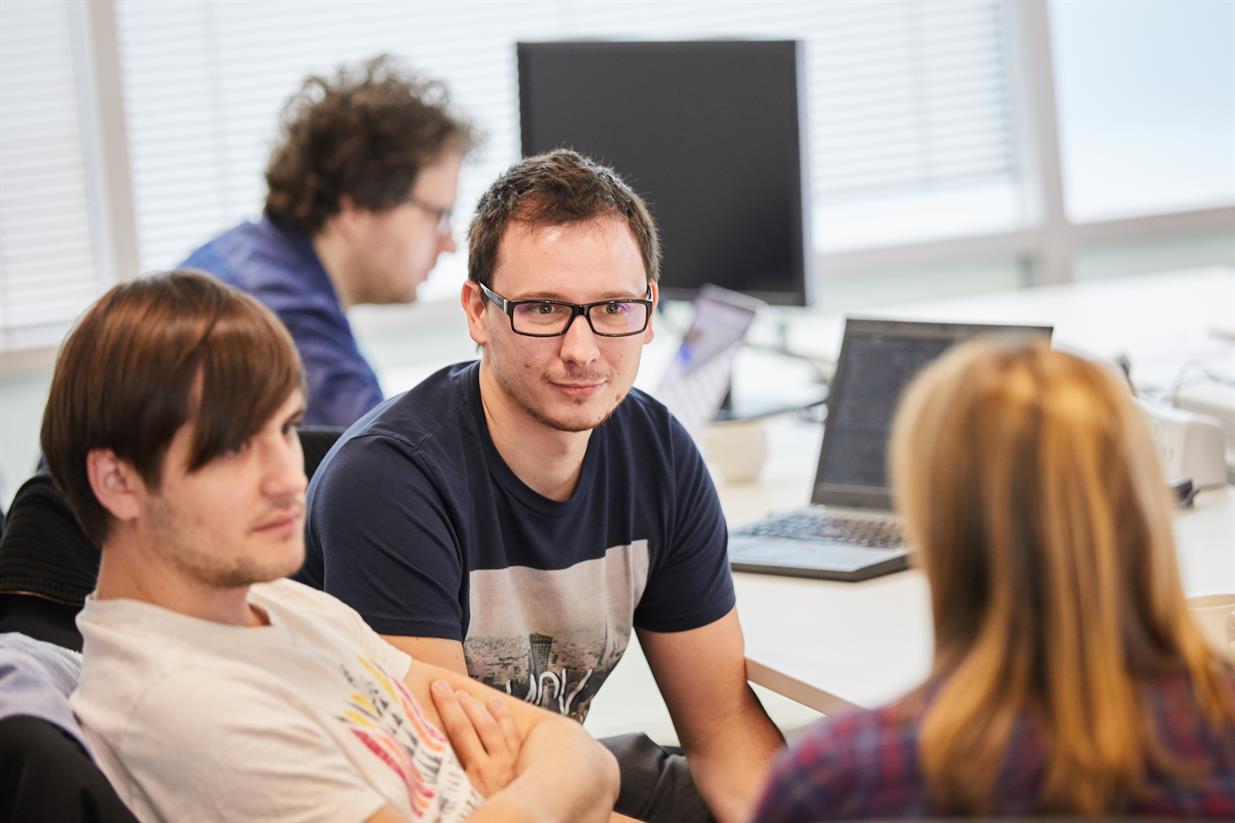 Following is a list of our key solution deliverables:

The following architecture diagram shows the technologies used within the architecture as well as the logical flow of the system. 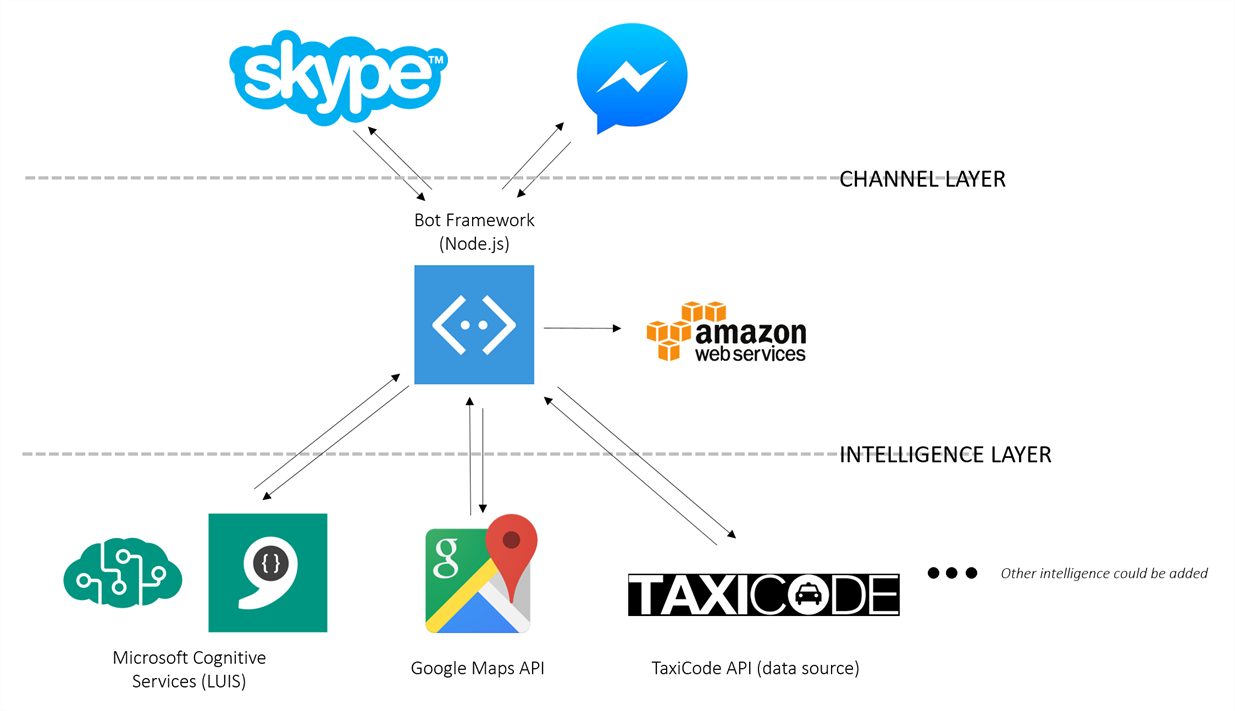 To further explain this architecture diagram, it is split out into three sections: Intelligence layer, Bot Framework, and Channel layer. The following descriptions illustrate the high level technology used in each layer. The technical details of the implementation are described in the Technical delivery section later in this document.

The intelligence layer allows the bot to call out into all the sources of data (Taxicode API), location information (Google Maps API), and natural language processing understanding (LUIS) that it needs to perform the user’s request to book a taxi. The intelligence layer could be expanded or reused. For the Taxicode Bot, other intelligence services, sources of information, or analytics could very easily be implemented into the bot via APIs. For Booxscale’s wider work on bots, this architecture could be repeated across customers and pull in the necessary intelligence sources needed to complete a specific task; for example, for a customer support bot they might want to add sentiment analysis instead of mapping functionality.

The team used the Bot Framework Node.js SDK to build out their project. They were able to quickly get started building up functionality via libraries and separate dialog functionality for optimal reuse of code. 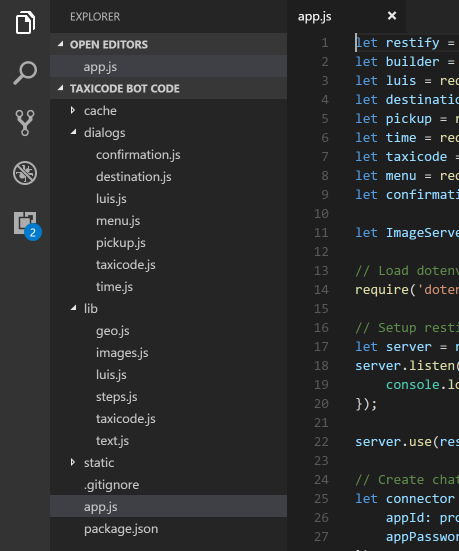 The channels implemented included Skype and Facebook Messenger; however, this layer of the architecture is expendable and can be evaluated after the bot is in production use within a channel to obtain user-related data on bot and platform utilization. A great resource used to test functionality on each platform was the Microsoft Bot Framework Channel Inspector.

The following diagram shows the logical flows through the system when a customer interacts with the Taxicode Bot.

The key components in the Taxicode Bot delivery were features that would allow the user ease of use, language understanding, a bot personality, and constant updates on what was happening and how to get help. In the next section we will talk through the implementation of these features that helped the Booxscale team achieve the problem statement goals. The team built the bot by using the Bot Framework Node.js SDK along with calling other APIs such as Google Maps, Taxicode, and LUIS.

Welcoming the user and introducing the bot personality (Bot Framework)

The team felt it was important to keep the brand of Taxicode in the bot and have it be a quick, easy offering to use as well as a nice experience for the customer. The Booxscale team used the Language understanding Node documentation as well as viewing the LUIS.ai MVP Session from the hackfest.

The first implementation point was to add a welcome message after the bot is initiated. At this stage the code also sets up the privateConversationData variables so that a small amount of user data throughout the session can be stored for when the Taxicode API is called.

These two small integrations enable new customers to easily use the Taxicode Bot without having to learn how.

Hero cards and buttons are a great way to reduce the amount of typing needed in bots to accomplish a simple task. In addition, they provide rich information and tailored next steps for users so they know what the next step is in the process to achieve their goal (such as booking a taxi).

The team found this session about Cards and Attachments in Bots very helpful.

If the user would like to change the variables (for example, an address may have been interpreted in a different way), always provide the option to quickly confirm or change the stored parameter to send to the Taxicode API.

This code then calls into the destination.js file to continue that dialog thread with the user and produce the location cards. 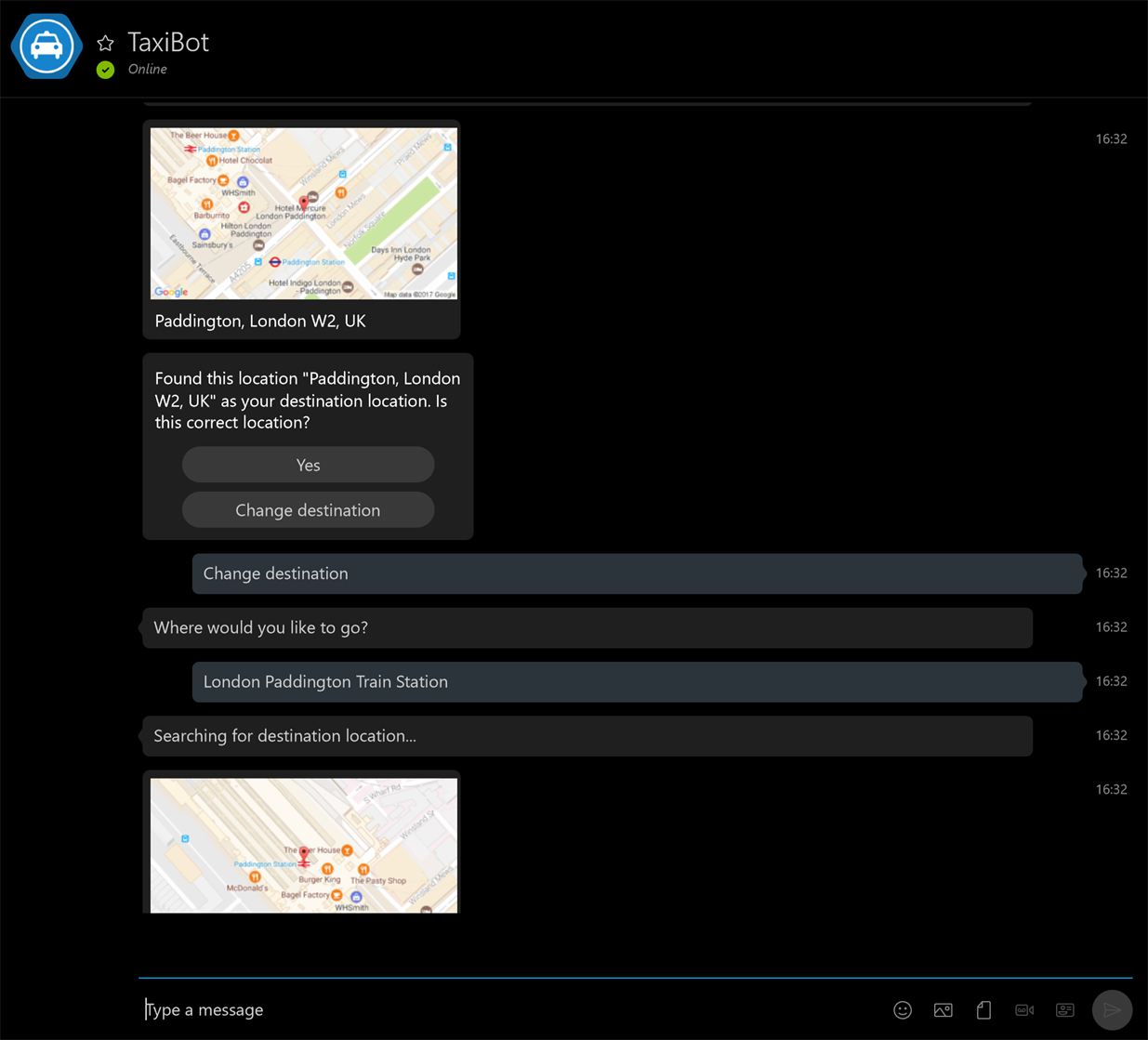 Keeping the user in the loop (Bot Framework)

Because the final call off to the Taxicode API can be retrieving and searching for a lot of data, the key thing here was to make sure the user knows that the bot has understood the request and is working on it. The team implemented the sendTyping feature and a friendly message to let the user know it will only be a couple of seconds of extra waiting (for more information, see the sendTyping method).

The team wanted the bot to be easy and natural to use, so another key element was to allow for the user to simply type I want to go to London Paddington from London Kings Cross Station tomorrow at 8:00 AM and the bot would skip all the form flow questions and jump straight to interpretation and confirmation by using LUIS.

LUIS lets you create language models for your application to better understand intents or entities. LUIS uses pre-built models from Bing to be able to recognize entities such as places and times, which were very useful in this scenario. After your model is trained, it is deployed as an HTTP endpoint and returns easy-to-use JSON to break down and feed into your applications.

The model in the following diagrams was built in the web UI by using intents and entities.

The following code shows how to query LUIS and interpret the JSON that is returned.

After a response is retrieved, you can pick apart the JSON to find the intents and entities and check if they are in the correctly parsed format.

These two code sections result in the following output. Given the full plain text string, the text is passed to the LUIS model to understand the intents and entities contained. If the score back from the LUIS model is higher than 0.6 (60% confidence), the bot will return the entity (for the following example the destination is inferred), and then ask for confirmation that the inference is correct. 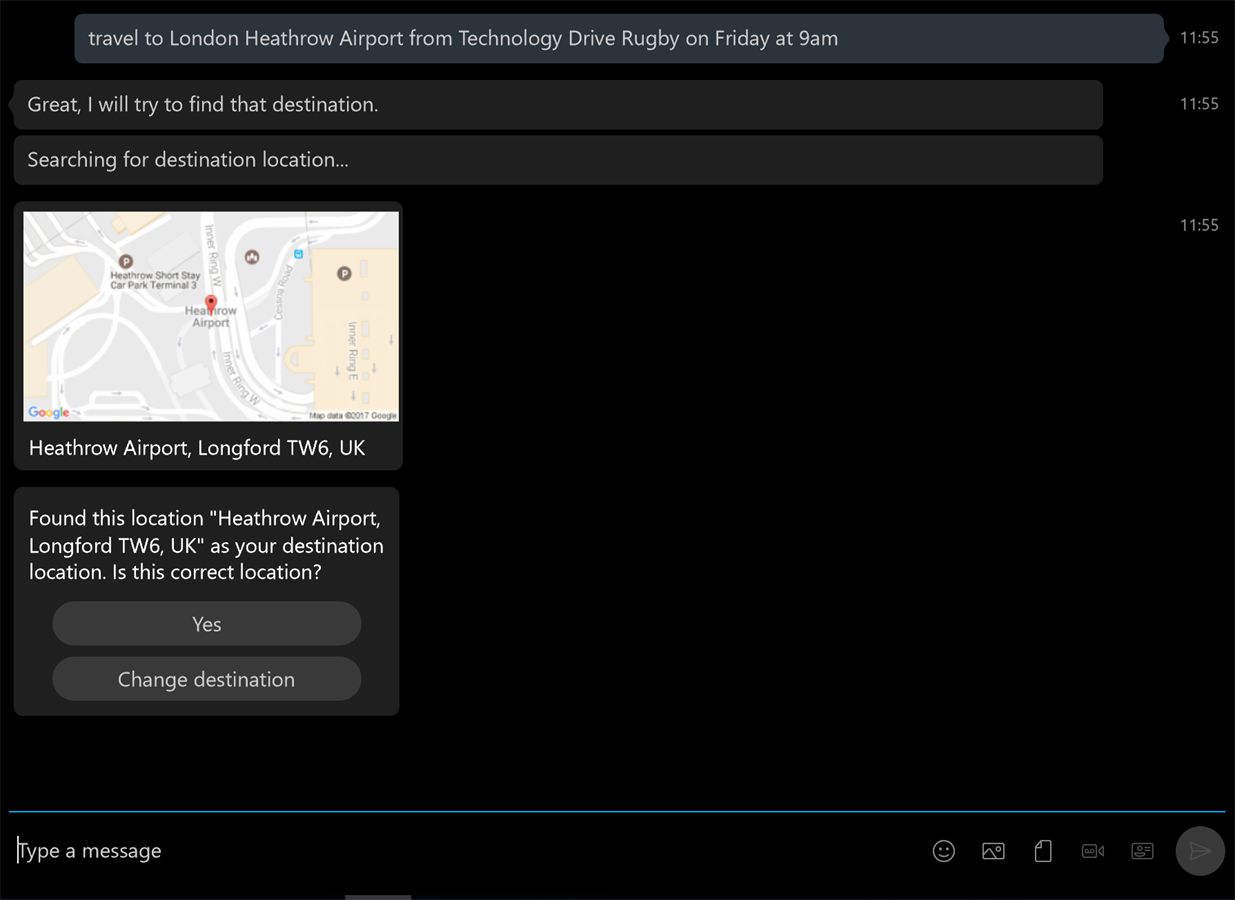 It was a great four days spent with the Booxscale and Taxicode teams, where they worked hard to create a production-ready Taxicode Bot that allows the user to quickly and easily order a taxi from messaging channels such as Skype and Facebook Messenger. 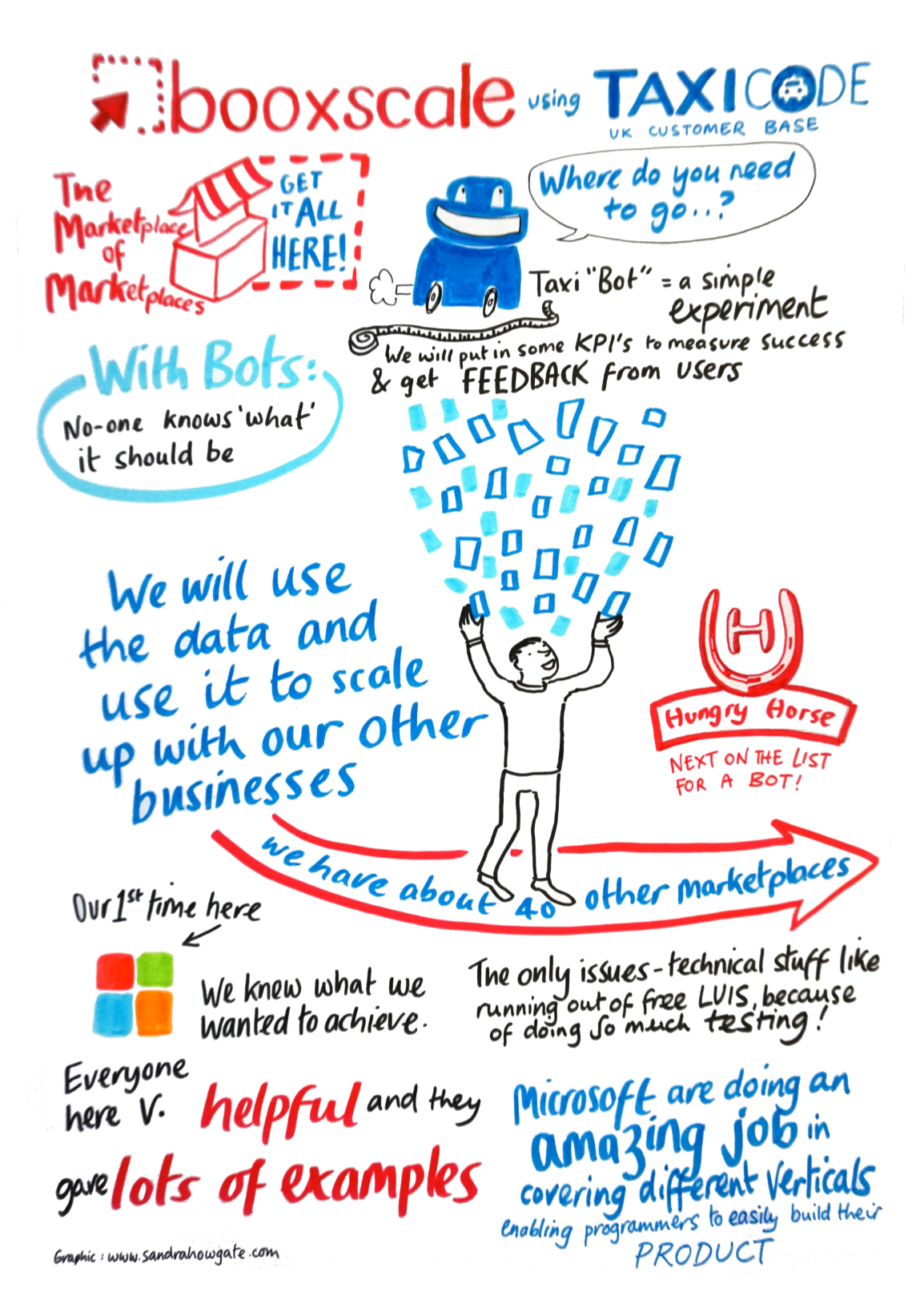