Equadex is a digital services company that has spread its business around several axes: software engineering, telecommunications, and computer systems. It is currently developing a Xamarin application called Helpicto that provides a solution to help children with autism to communicate more easily with their environment, based on pictograms and associated keywords.

Equadex partnered with Microsoft to create a strong and innovative project that consists of uploading relevant pictograms in the Helpicto backend and implementing a straightforward image recognition process.

The project was developed by using Xamarin, ASP.NET, Microsoft Azure App Service, Azure SQL Database, and Microsoft Cognitive Services. In this case study, we focused on a specific sub-project related to the Helpicto backend, involving Azure Functions, Azure App Service, and Cognitive Services: how to inject pictures in the Helpicto backend from the Xamarin side as well as from the backend, and using the most efficient way to do it.

For the hackfest, the entire team developing Helpicto was involved.

Equadex is a French IT engineering company, focusing specifically on software engineering, telecommunications, and computer systems. Over the last few years, the company has grown quickly; when it was created in 2007, the company had only 3 employees compared to 43 today. The head office is located in Toulouse, and a new agency recently opened in Pamiers (Ariège).

With its Helpicto application, Equadex is initiating a diversification. The company wants to position itself as an ISV in the global health sector. Helpicto is dedicated to people who suffer from language disorders related to autism, dysphasia, or Alzheimer’s disease. The project is the result of a partnership between Equadex and Carine Montoulan, a psychologist and the director of the InPACTS association as well as the John Bost Foundation, created in 1848, which welcomes more than 1,500 children, adolescents, and adults suffering from mental disorders or physical disabilities.

After several months of intense work, the first version of the Helpicto application was developed, and based on this model, Microsoft came in as a real boost in the development phase by implementing a strong and fast solution regarding the image recognition process.

Since its inception, Equadex has been using Microsoft technologies, and the team involved in the Helpicto project has strong skills in .NET and Azure.

Helpicto provides an innovative solution to help children with autism communicate with their environment. To stay focused, a child with autism usually uses specific pictograms in a sequence to recognize a situation, a question, or another interaction. Helpicto uses speech to text to generate a sentence. It then uses language understanding to categorize keywords.

The final objective is to build a sequence that represents a specific situation. In this sample, the speech command is “Do you want to eat an apple?” Helpicto will then generate three images: the child himself, the action of eating, and a picture of an apple.

The user experience is both intuitive and simple:

Several technologies are incorporated into this application, such as the Speech to Text API, LUIS, the Computer Vision API, the Translator Text API, Azure App Service, Azure Functions, Azure Blob storage, and Azure SQL Database, but this article is focused on a key part of the application backend process: how to upload one or more pictograms to Azure, and how Cognitive Services can help the user improve pictogram recognition by using Azure Functions, the Computer Vision API, and the Translator Text API.

The two scenarios covered in this case study are:

We divided the hackfest into three distinct parts, which involved each member of the team depending on their skills: 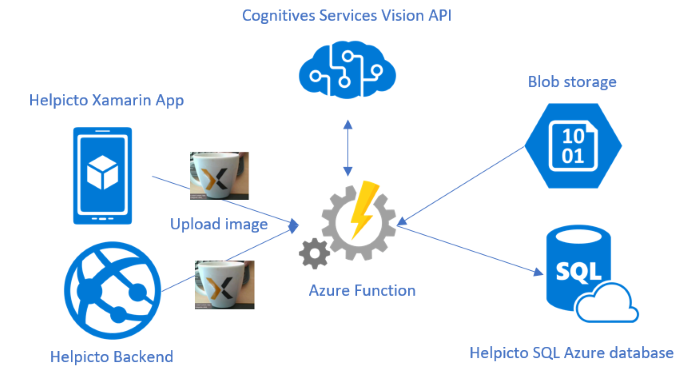 We worked on several architectural designs, and had a lot of discussions about the most efficient way to achieve our goal. Because we have two scenarios, one involving a Xamarin application and the other involving a batch mode, we decided to use Azure Functions to call the Cognitive Services REST APIs.

Azure Functions allows us to mutualize our code, and can be called as a simple REST API from the Xamarin application as well as an asynchronous batch mode from the website. Eventually, Azure Functions will scale on demand if needed.

Creating the Azure function was pretty straightforward. This function will be called by both the mobile application and the backend website. 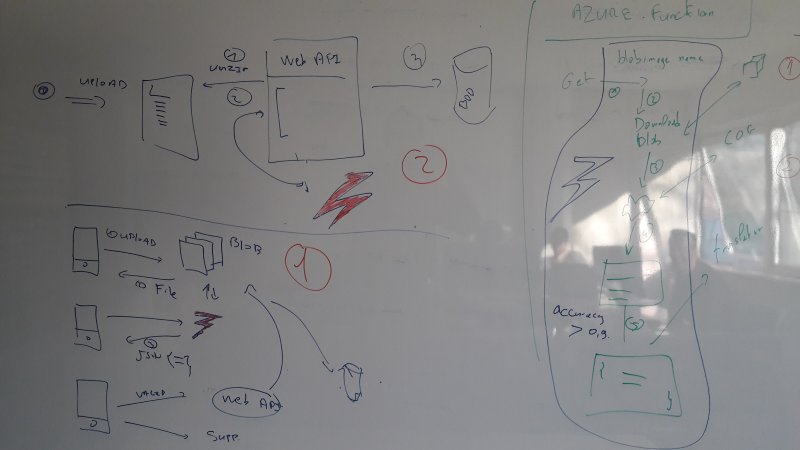 In a nutshell, the Azure function is in charge of: 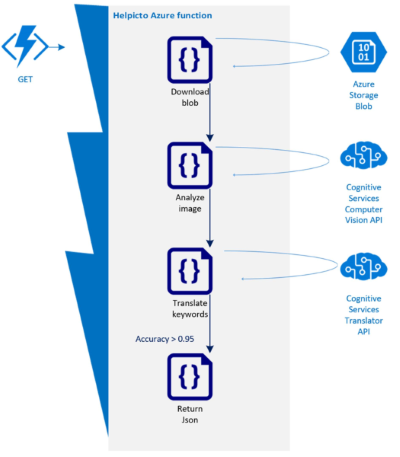 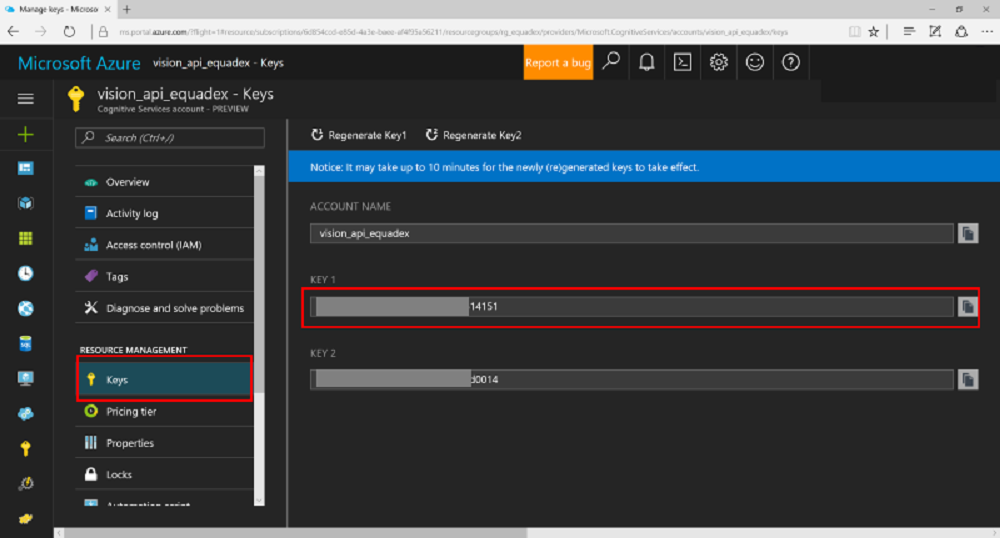 Adding a simple using in our code was also easy to do.

Because we needed to work with Azure Blob storage, the Computer Vision API, and the Translator Text API, we decided to store all the settings within the Web App. 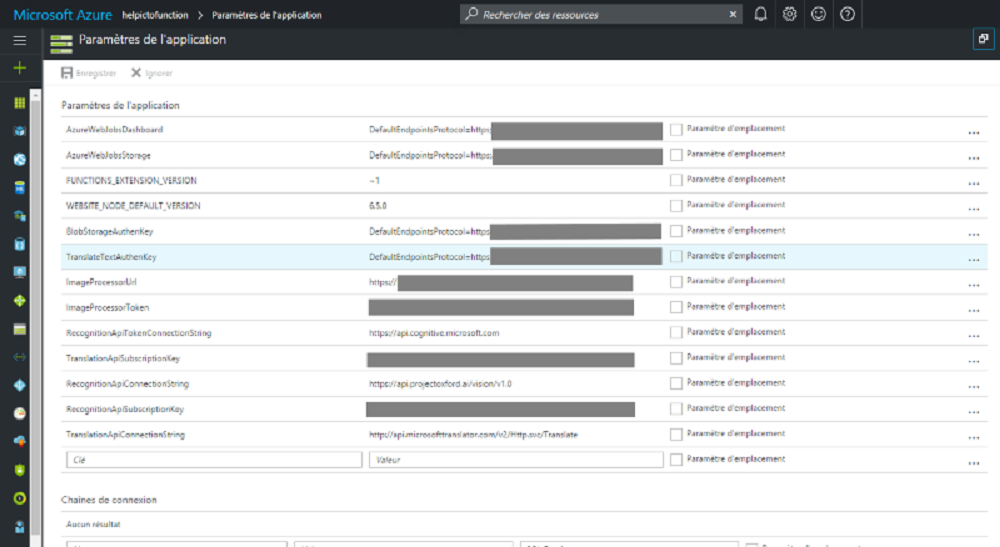 Getting those parameters from Azure Functions by using the ConfigurationManager object was quite simple.

The first step was to get the blob stream. We used the CloudBlobClient object to achieve this.

The next step, within the blob stream, was to call the Computer Vision API:

Following are the results of the Computer Vision API call.

We then took only the tags where Confidence was superior to a defined threshold (90%).

To demonstrate how the application works, we used a common image (a cup of coffee) that could be used within Helpicto. Helpicto will only use results whose accuracy is greater than 90%.

The first scenario is the user scenario from the Xamarin application:

Following is the architecture that we used in this scenario. 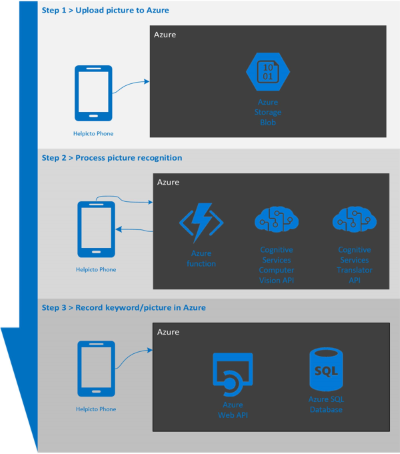 The second scenario is the batch mode. An administrator can upload a ZIP archive containing several images. The Web API extracts the images from the ZIP archive and sends them to the staging Blob storage.

A specific website page allows the administrator to validate each image (and then add or remove keywords for the specific image).

From an administrator’s point of view, the steps are as follows:

The following diagram shows the technical steps involved in this scenario. 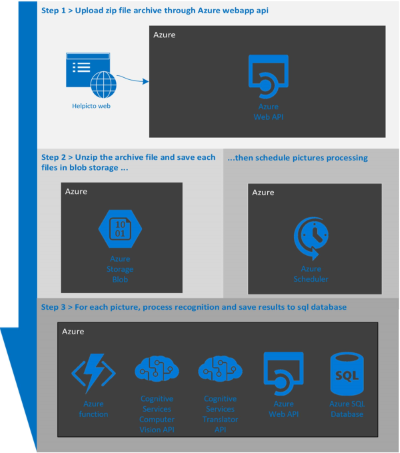 During this three-day hackfest with Equadex, we partnered with the team to help them add a key feature to the Helpicto backend by using platform as a service (PaaS) services such as Azure App Service, Azure Functions, and of course, Cognitive Services.

We had different topics to address, such as how to deal with two kinds of scenarios, how to get the most efficient code, and how to use Azure Functions to execute some workloads outside the application without having to maintain a 24/7 architecture.

According to Mathier Busolin and Anthony Allebee in an interview with L’usine digitale, a French high tech news website, this three-day hackfest opened great opportunities, helped them work in a more collaborative way, and helped them consider new technical solutions they had not thought of before.

The hackfest saved Equadex many weeks of work in the development process, and enabled them to announce the commercial distribution of the application by the beginning of July.

The economist website Touléco published an article on the collaboration between Microsoft and Equadex focusing on the Cognitive Services provided by Microsoft.

An excerpt from the article:

The solution developed by Equadex, which wishes to specialize in the development of healthcare software, has seen a serious acceleration during these three days with the development of the “image recognition” component. “It’s about integrating new technologies into the Helpicto application and referencing it in the Cognitive Services suite that puts Microsoft technology at the service of health,” says Anthony Allebée. This portal allows developers to integrate their applications dedicated to understanding the language. 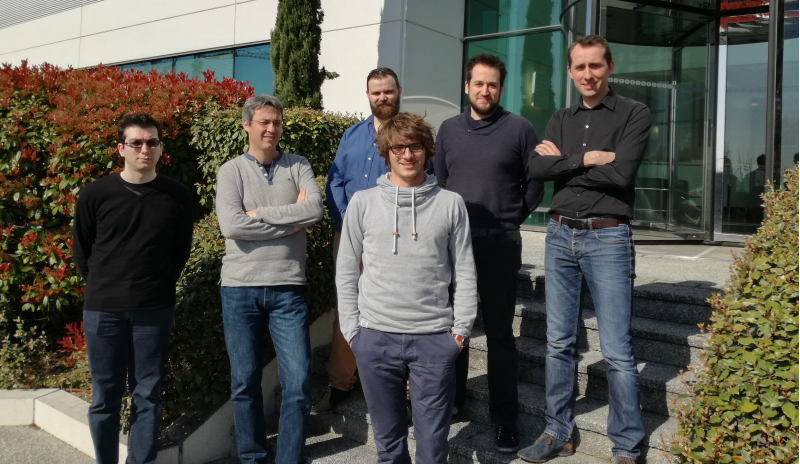 Last but not least, following are some pointers to additional resources that will help you to more deeply understand the concepts and technologies we discussed in this article: