Microsoft and ADAM Software teamed up to optimize ADAM Software’s build and release pipeline. Initially we performed a value stream mapping (VSM) exercise to clearly outline the current state of the DevOps lifecycle and to agree on the optimal future state. As a result of the VSM, we identified the key areas of focus for a hackfest, where we implemented the following DevOps practices:

During the VSM exercise, the core team was joined by key stakeholders from all teams within ADAM Software and by Rasmus Hald from Microsoft.

ADAM Software is a Microsoft Gold Certified Partner and its Smart Content Hub is qualified for the Azure Certified Program and available for customers through the Azure Marketplace.

ADAM Software and the Microsoft team in Belgium have had a close relationship for many years and the partnership for this hackfest began with an invitation to a DevOps hackathon in the Netherlands. There the ADAM Software developer team was introduced to the Microsoft DevOps solution offering and after discussing their current way of working, we agreed to organize a value stream mapping workshop at ADAM Software, followed by a DevOps hackfest.

Before the delivery of the VSM workshop, ADAM Software gave a high-level overview of the Smart Content Hub solution architecture to ensure that everyone was aligned on the major building blocks and the solution inner workings.

The Smart Content Hub is a web-based application and is actually a suite of products integrated in a single web front end. The different products surface for customers as application modules that can be enabled on a per-customer basis. A central core module contains the common logic across the different products and there is a central data store. The solution depends on a number of third-party and OSS products and libraries (for example, for search capabilities across the solution, Elasticsearch is used) and also provides integration with existing products at a customer (for example, SharePoint).

ADAM Software is providing its solution to its customers through a series of implementation partners, which perform the actual installation and operations at the customer. Note that Smart Content Hub can be installed on-premises at the customer, at a hoster, or with Azure Cloud Services. 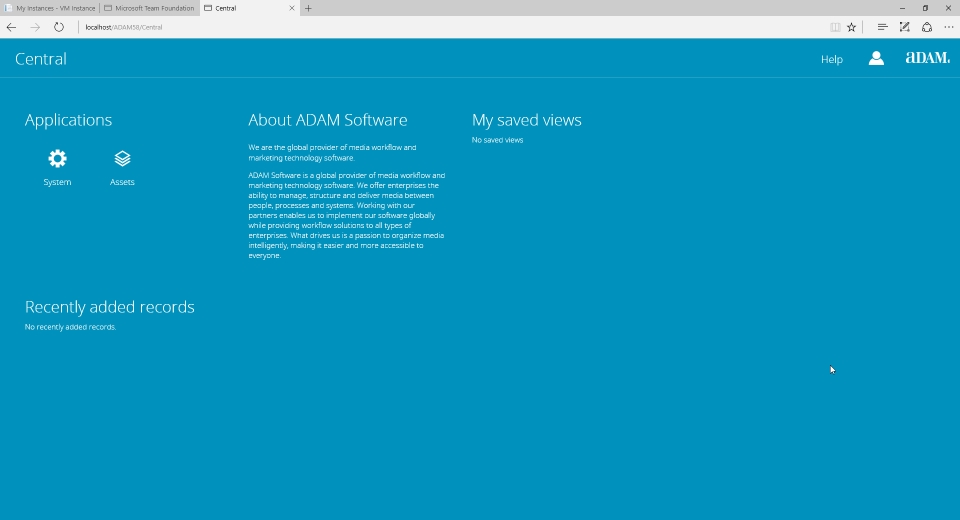 To identify the bottlenecks, the team conducted a value stream mapping of the entire software delivery process, from the ideation phase to the delivery and support of the released product. The VSM exercises lasted a full day and involved an extended team with stakeholders from all the teams at ADAM Software (product management, product owners, testing, development, support).

The team was able to visualize the current state of the software delivery process and identify the areas with wasteful activities. There were lively and open discussions between all team members and the exchange of ideas resulted in numerous proposals to eliminate this waste.

The following diagram shows the results of the value stream mapping workshop. We used the latest production release of the Smart Content Hub (version 5.7) as the basis for the VSM workshop.

Setting up a new run-time environment for our solution was fully automated but getting a developer environment set up can take up to 2-3 days.…

Automating the provisioning of a developer environment can save us multiple days per developer per release, allowing developers to focus on their key strengths.

After discussions with the team, we decided to take on the following items during the hackfest:

The different products that are part of the Smart Content Hub are being developed by different teams at ADAM Software. There is currently an ongoing effort to move all products to Git-based source repositories. The team decided to take only the products within the scope of the hackfest that were already in a Git repository; this includes the Core, REST API, and Product modules.

The following diagram outlines the high-level components of the overall process and architecture for the hackfest. 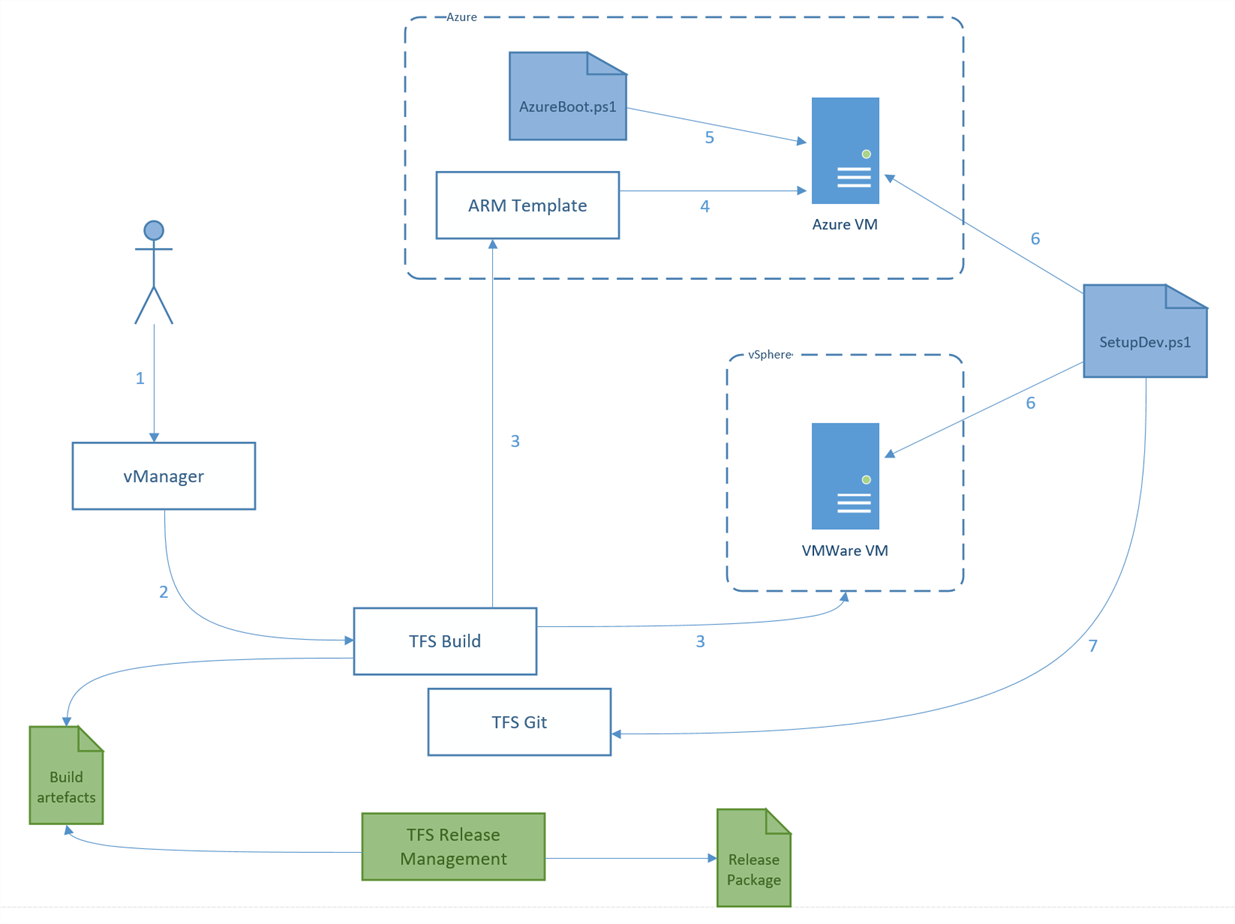 ADAM Software has a local vSphere environment as well as an Azure-based environment. A key requirement for the envisioned solution is that environments must be deployable to any of these infrastructures. For the developer environment, a developer should also be able to provision it on a local developer workstation. In addition, the provisioning process may be triggered manually but should also be capable of being integrated in the CI process that is already in place.

Let’s look at the key deliverables of the hackfest in more detail and focus on the technologies that were applied to achieve this.

During the hackfest, the team decided to use a combination of infrastructure as code and scripting for setting up a developer environment. The base operating system (OS), developer tools, and SQL Server database are provided through IaC; the setup of the source code and configuration of the environment are performed through PowerShell scripting. In addition, the solution makes use of open source software (OSS) such as Elasticsearch. These software components are also installed and configured using PowerShell scripting.

When provisioning a developer environment on Azure, Azure Virtual Machines are being instantiated through Azure Resource Manager templates. This allows for flexible configuring of the infrastructure components. During the hackfest, the team created a single developer environment Resource Manager template consisting of a single Azure virtual machine. However, through IaC, this could easily be modified to separate the database server from the developer machine.

The following is a snippet from the Resource Manager template for creating the developer environment on Azure.

The following software components need to be installed and configured on the virtual machine:

In addition, the Smart Content Hub solution also leverages open source software, namely Elasticsearch, to perform product searches in the central database. As part of the configuration of the developer environment, the Elasticsearch open source software needs to be installed and then configured. This software, as well as other third-party software components, is installed through PowerShell scripting in the same manner as the Microsoft software components. 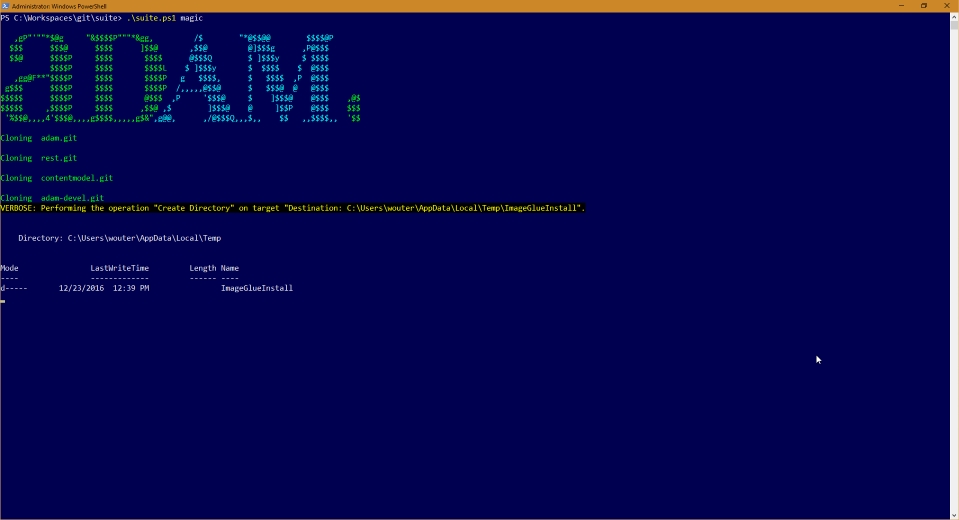 Currently the Git source code repositories are hosted on Team Foundation Server on ADAM Software’s on-premises infrastructure. To allow the source code to be downloaded on the Azure virtual machine, the team created an Azure VPN gateway to connect with the on-premises VPN appliance.

Below is a snippet from the developer environment configuration PowerShell script.

The Resource Manager template and associated PowerShell scripts for provisioning the developer environment were then integrated in vManager, a web-based provisioning tool that was developed in-house at ADAM. Using vManager, anyone in ADAM Software can provision an environment. Using a set of input parameters, a specific release version, OS, and SQL Server version can be chosen, as well as the target environment (vSphere or Microsoft Azure). 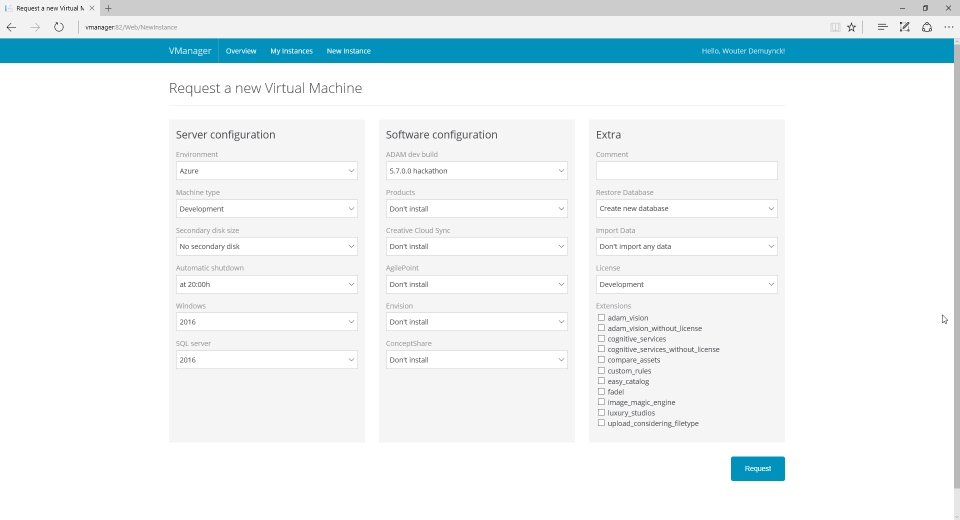 To allow environments to also be created automatically as part of the CI process, a Team Foundation Server build definition is created that will invoke the Resource Manager deployment or on-premises deployment. An important learning from the hackfest is that creating a virtual machine from a custom image can take a considerable amount of time when the virtual machine image is not on the same storage account. The team has decided to put the image and the target virtual machines on the same storage account for performance reasons.

The following code snippet shows the PowerShell script that is invoked by the build definition to perform a Resource Manager deployment. 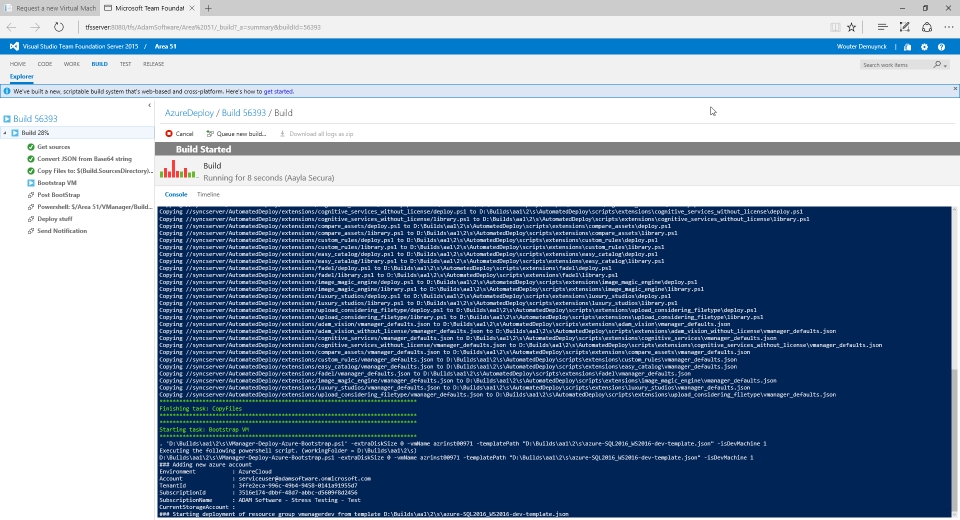 The vManager service in turn will use the TFS client API to trigger a new build of the above mentioned build definition.

Another wasteful activity that was identified by the team during the VSM exercise was the creation of the release packages. As mentioned, the Smart Content Hub is a suite of products. For each of these products there is a separate installer package. During the release packaging, the different installer packages need to be selected, included in a consolidated zip archive, and be stored on a central publishing location, ready for distribution to customers.

These steps were previously manual steps, which required several repetitive actions to be performed by the person responsible for the packaging. During the last production release, several iterations had to be performed of this operation, resulting in significantly increased lead times.

The team decided to automate these tasks during the hackfest. The approach that the team chose was to leverage TFS Release Management. A release definition was created that invokes a PowerShell script that performs the selection of the appropriate installer packages, using the correct versions, and does the zip file creation and copying to the correct publish location. As of the current state, the release definition is triggered manually. This may become an automated process in the future. 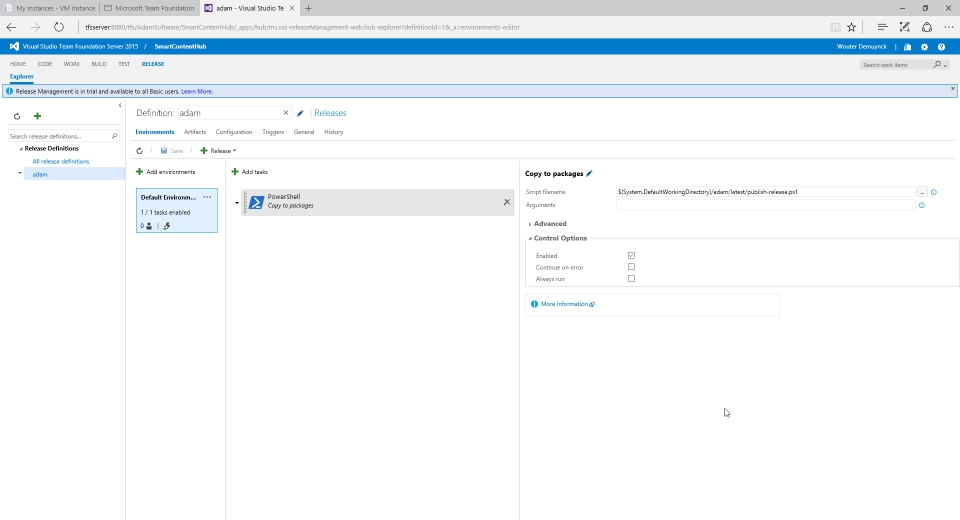 It was a pleasure to contribute to this hackfest with such a talented technical team and to see such a significant positive impact on the software delivery process. The goal set forward at the beginning of the hackfest was to reduce waste activities during the development and release phases. This would then consequently result in shorter lead times, more time being spent on core development activities and eventually in more value to be created for the end customer.

During the hackfest the team introduced infrastructure as code and added automation to remove manual operations during the delivery process. These activities will result in significantly less time spent in non-development activities by all developers and especially free up more time from the senior development team.

The hackfest also demonstrated that both Microsoft and open source components could be seamlessly integrated in a common automated delivery process, deploying flexibly across on-premises, private, or public cloud infrastructures.

In the meantime, the team has outlined a list of future improvements to the software and delivery process. Keep the hackfest spirit alive in the organization, team!

All of this would not have been possible without the dedication of the core team during the hackfest, but also the commitment from the entire ADAM Software management to support ongoing improvement activities to build better software. It was an honor to work with all of you! 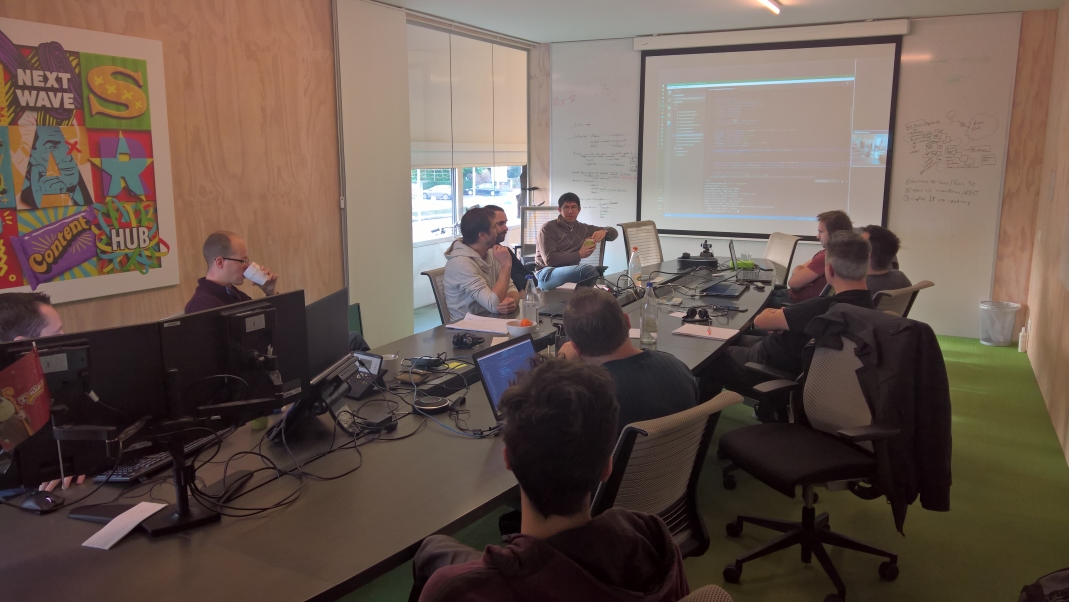