This report details how RISCO Group and Microsoft teamed up to streamline and accelerate the deployment of dev/test cloud environments through the creation of a web portal for the RISCO R&D team. The implemented solution used Azure Resource Manager and Puppet.

RISCO Group, an international company with headquarters in Israel, produces high-quality and reliable security products for every type of security installation. From intrusion alarm systems for residential and commercial installations to large-scale access control and integrated security and building-management platforms, RISCO aspires to provide customers with an abundance of top-of-the-line security management solutions. RISCO’s cloud-based and software as a service (SaaS) solutions enable efficient and economical installations. A smartphone application offers users remote access to their security systems and enables self-monitoring, catering to a growing trend in the industry.

In an envisioning session conducted by the team, RISCO described how the current deployment process suffered from long release cycles, inconsistencies between QA and production environments, and issues with synchronization between the IT and R&D groups. To improve and optimize the release process, the R&D and IT teams have been planning to adopt several DevOps practices such as continuous integration (CI) and continuous delivery (CD). Adopting these practices required a lot of effort from both teams at RISCO and so the company’s DevOps journey had to be taken in steps.

As the discussion moved forward, it quickly became clear that a major pain point to be addressed was a bottleneck in the deployment process of cloud environments for the use of the R&D team that took days and even weeks. Mitigating this pain point seemed like a good place to start because it could optimize an important part of the current flow and also pave the way to the implementation of CI/CD in the future.

Note: It is important to take the time and have a deep analysis of the current DevOps pipeline before choosing DevOps practices to implement. A useful, recommended method of analyzing a DevOps pipeline is the value stream mapping (VSM) exercise. VSM allows practitioners to illustrate the current pipeline and identify potential areas of improvement and DevOps practices that can help optimize the pipeline. This engagement leveraged a prior analysis Microsoft conducted with RISCO, so the team didn’t perform a proper VSM exercise.

The team decided to focus on this key pain point, which can be described as follows:

When members of the RISCO R&D team want a virtual cloud environment for development or testing, they request specific environments from IT, which must manually create them. These environments are multitiered and include various Azure services, so manual deployment includes creating these services, setting network configurations, and installing various modules on Windows and Linux virtual machines. This means that the time between an environment request to its deployment and availability to the requester can be as long as days and even a week, depending on the IT department’s load. This has severe consequences on R&D processes. RISCO has a need to automate the process and make dev/test environments available to developers on demand via an easy “one-click” process that will take minutes instead of days, thereby helping to optimize and streamline deployments. This process can also be extended in the future to be triggered automatically as part of a CI/CD process.

“We needed to provision each virtual machine manually. Windows updates, security hardening, and the deployment were manually configured. The deployment and configuration side took us a few days.”

The team designed a solution for creating a self-service web portal that will automate and accelerate the process of delivering cloud environments upon request. The solution as a whole is illustrated in the following diagram: 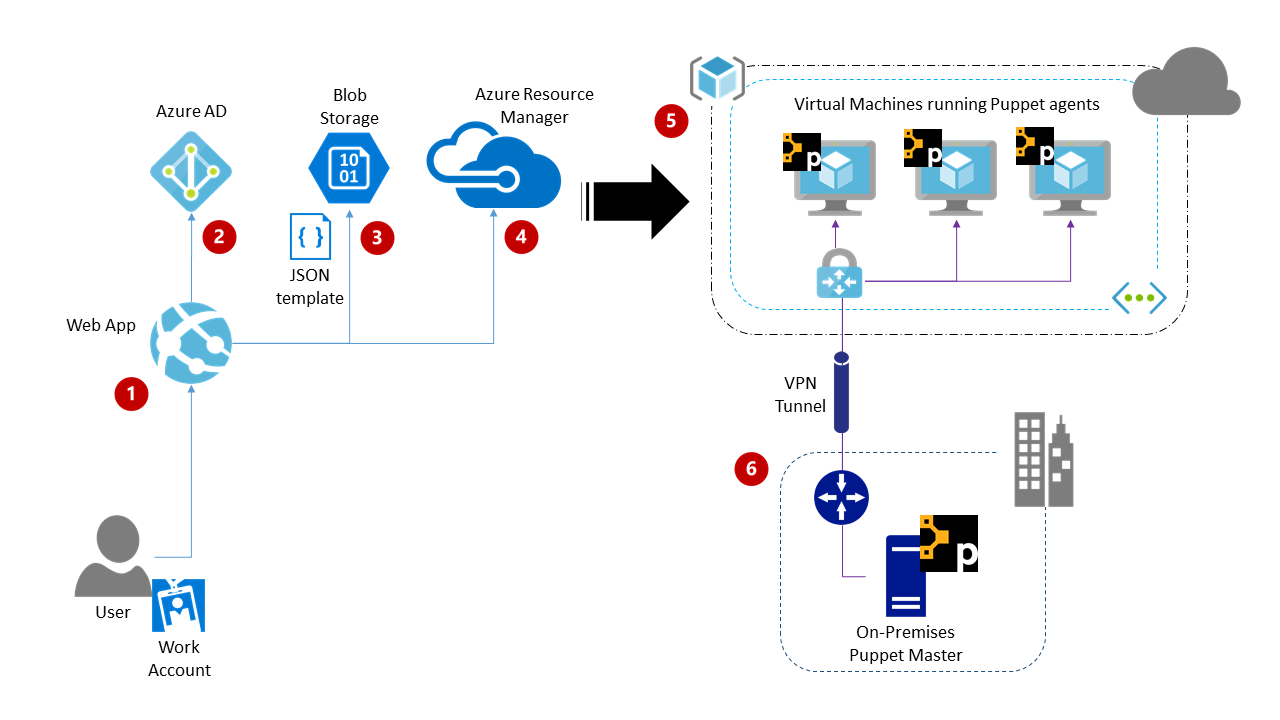 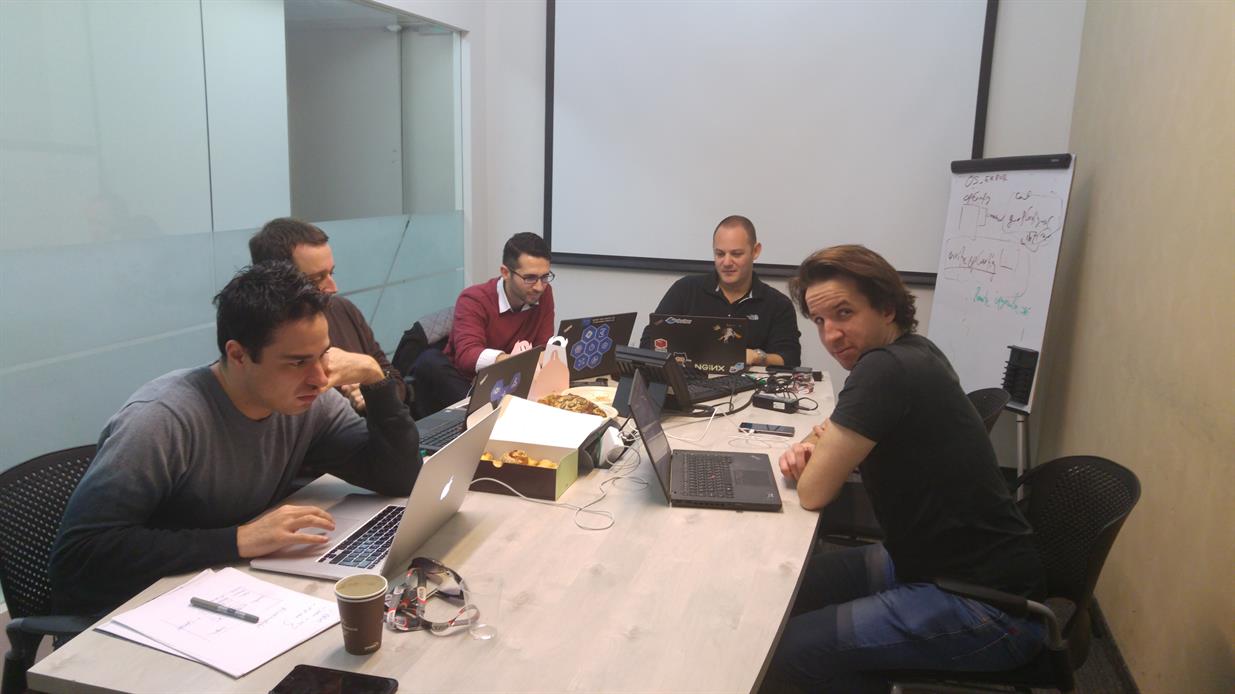 To provide a proof-of-concept implementation of the solution, a three-day hackfest took place and the team was divided into three subteams, each focusing on a different part of the solution:

It was also important to the team to ensure that the deployment pipeline implemented by the self-service portal can be extended to serve a continuous integration and continuous deployment (CI/CD) process in the future. Automating the creation of new cloud environments is a key part of this process and extending the self-service portal to trigger such deployments via some build system (such as Jenkins) using web hook can help the further adoption of these additional DevOps practices. 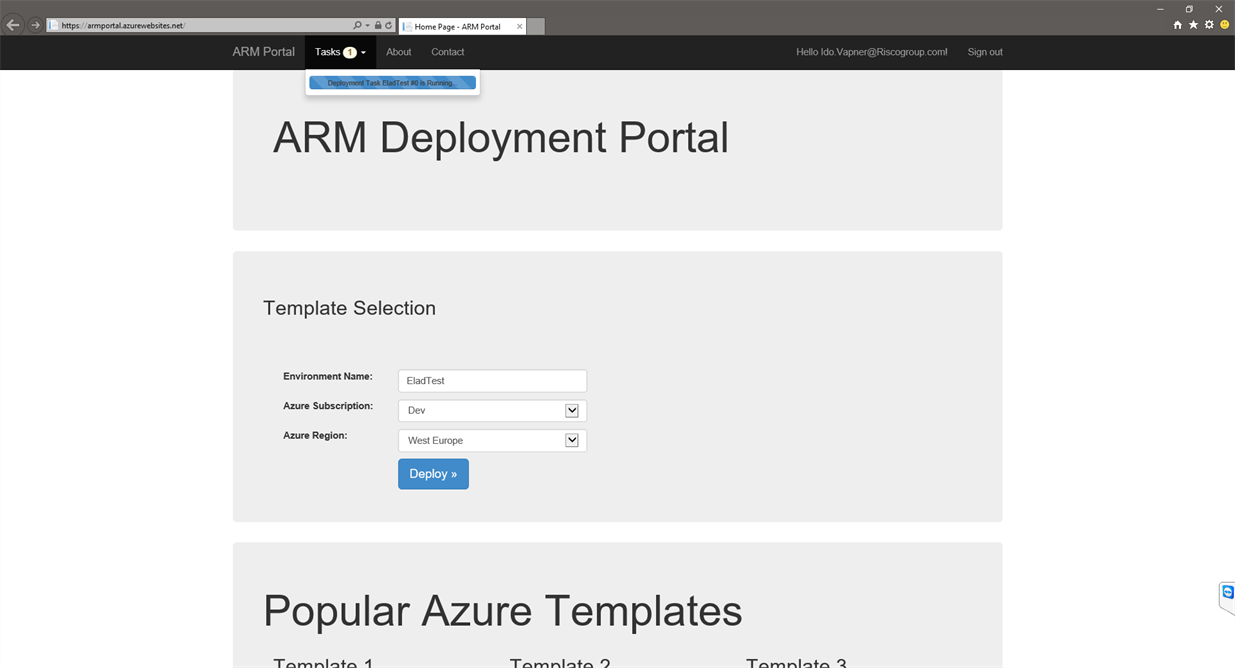 The portal was implemented as an ASP.NET web application deployed on an Azure web app. The application was connected to RISCO’s Azure Active Directory for user authentication and used the Azure .NET SDK to access Azure Resource Manager for deploying environments. The code of the application is available. 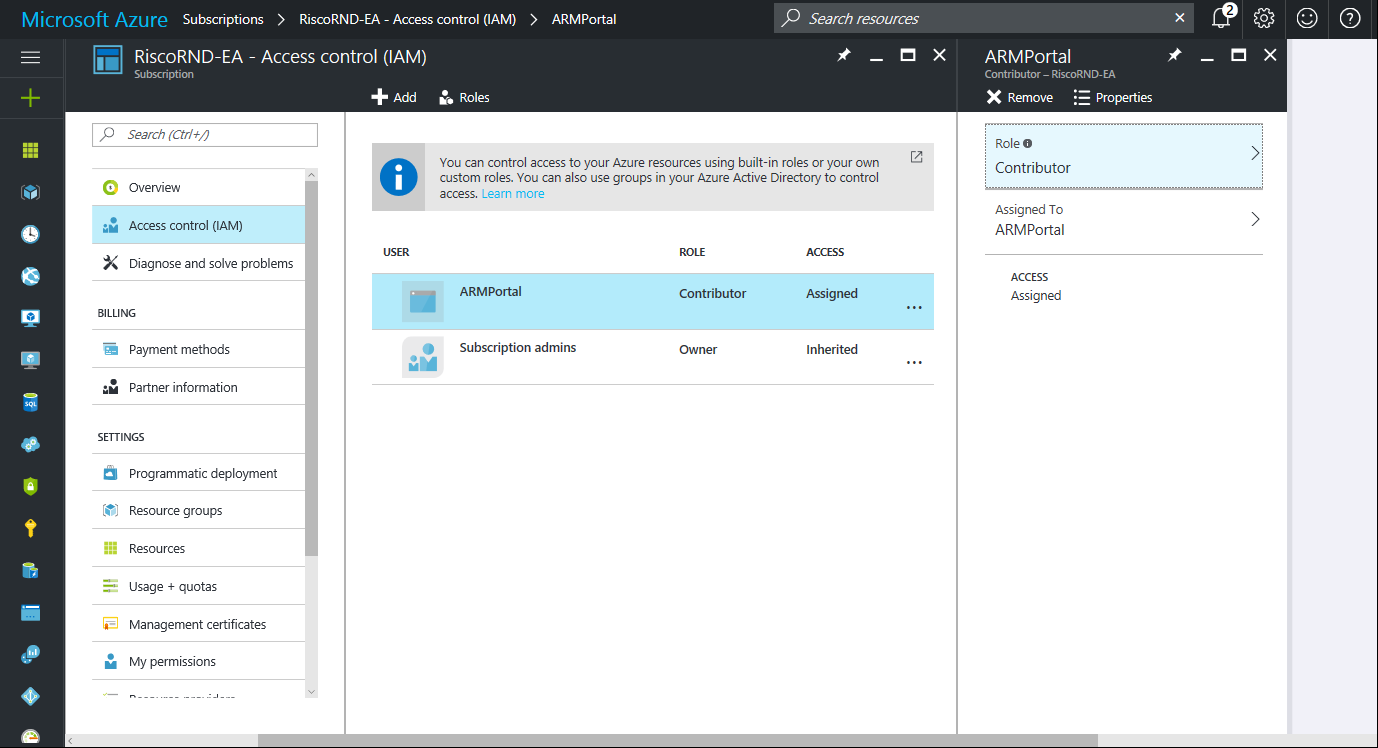 The web app was configured to authenticate users in the RISCO organization, as described in the article ASP.NET web app sign-in and sign-out with Azure AD. This allows users to use their existing work credentials to access the application and the web application to retrieve user profiles easily. The relevant reference code in the web application can be found in the Startup.Auth.cs and UserProfileController.cs files.

Using the Azure SDK to deploy an environment

In the web app implemented by the team, calling the Azure Resource Manager included creating a resource group and deploying a template into the new resource group. Note that both requests require an access token previously obtained using the client ID and application key generated when the Active Directory application was created. The relevant code can be found in the Helpers.cs file:

The full code of the application is available here.

Environments available for deployment by the self-service portal are defined as Resource Manager JSON templates. These templates are stored in an Azure blob storage container, where they are made available to the web application for deployment. In this hackfest, the team wanted to use a template that described a real environment RISCO already had in place to showcase how powerful Resource Manager templates can be in describing complex cloud environments. Exporting a template from an existing resource group can be achieved via the Azure portal or via the Azure CLI.

The resulting template ended up including more than 40 resources, their dependencies, and configuration.

A few things to note about the example that follows:

Once virtual machines are deployed for the requested environment, post-deployment virtual machine configuration is handled by Puppet. For more information on Puppet, visit the Puppet official website and the Puppet Enterprise overview.

To briefly describe the way Puppet works in this scenario:

To better understand Puppet terms such as nodes, classes, and manifests, see the Puppet glossary.

For security reasons, a Puppet master needs to accept agents that attempt to connect to it. On default, this needs to be done manually using the console as shown next. 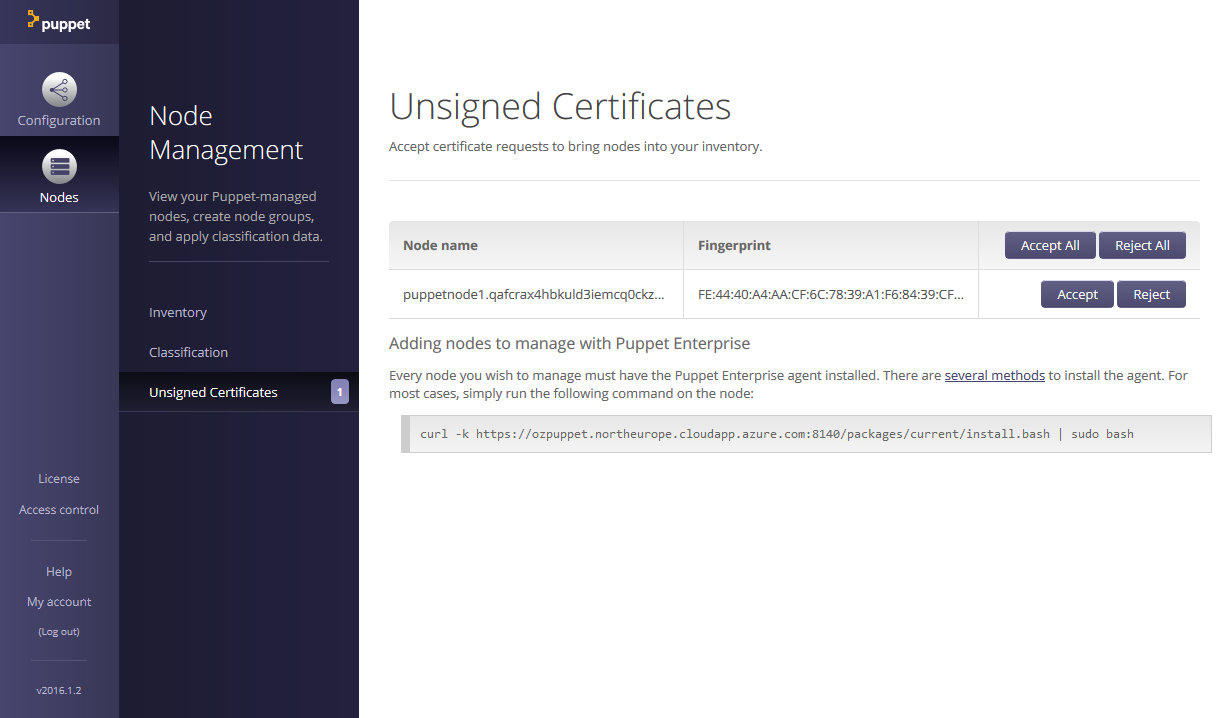 For the purposes of the POC, the team used a naive autosign policy that accepts any agent certificate. After adding autosign = true to the [master] block in the configuration file, the block looked like this:

Once this configuration was in place, agents connecting to the master were automatically accepted into the master’s node inventory: 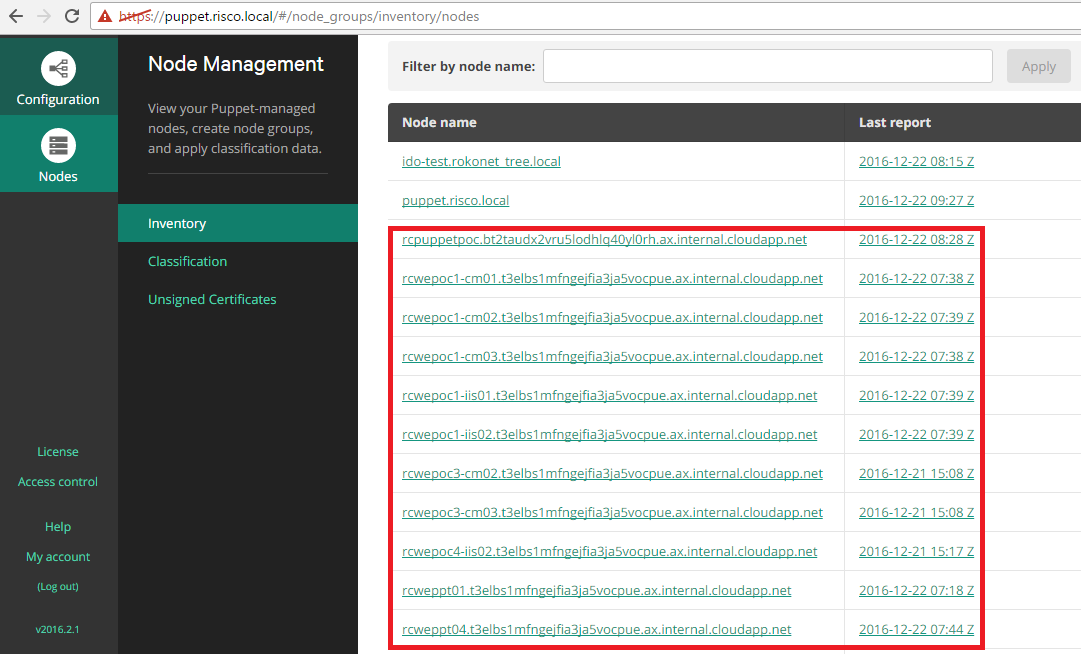 For the purpose of the POC, the team decided to showcase three Puppet post-deployment actions to be executed on Windows Server 2012 virtual machines:

To perform the first two actions, the Chocolatey Puppet Forge module and Windows firewall Puppet Forge module were installed on the master. Installation was done by connecting via SSH to the Puppet master server and executing the following commands:

For the third action, the team created a simple custom module that uses the PowerShell provider to install Firefox via Chocolatey. The simple manifest that defines the new class included the following code:

After adding the above three modules to the Puppet master, the team defined a node group to include all the nodes that should be configured. The new group was defined to include all Windows nodes, and the module classes mentioned above were added to it. For more details, see this quick-start guide. 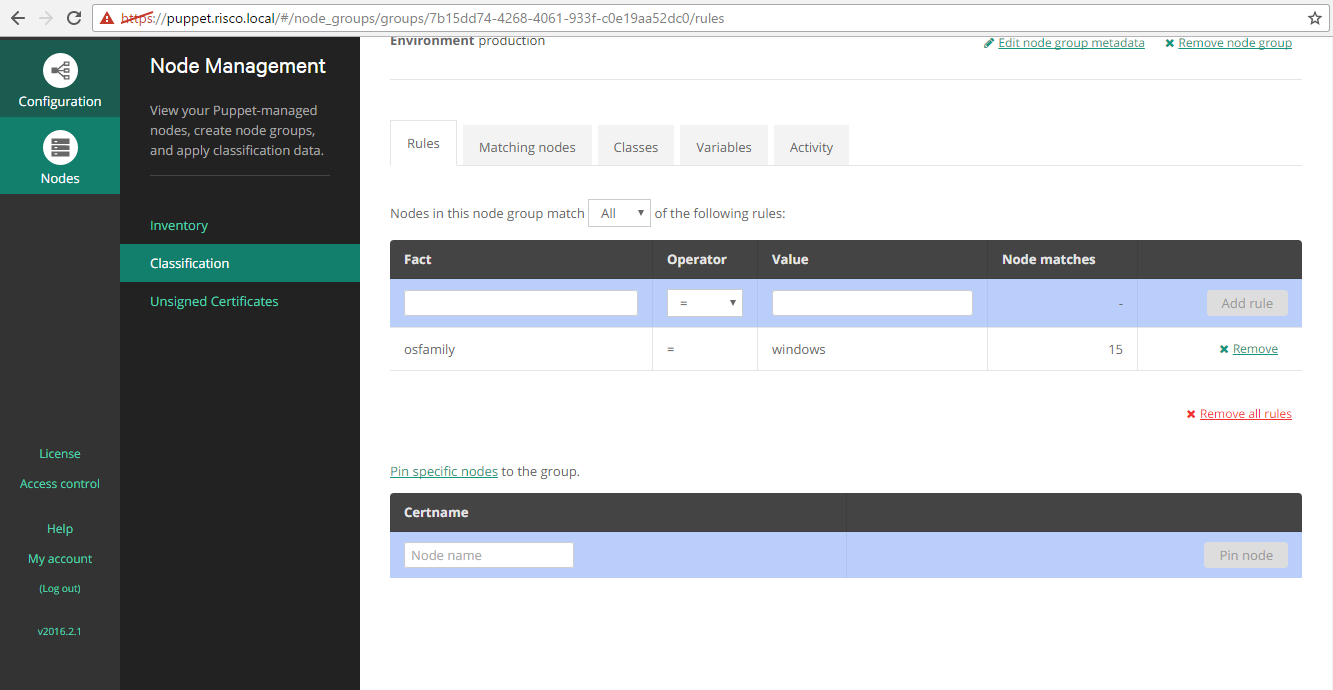 To summarize, any Windows node connecting to the Puppet master will be associated to the new group and have the above classes associated with it. This will ensure that the Puppet agents on the virtual machines will perform the desired installations and configurations.

Despite not performing a formal VSM exercise, the team was able to build on the envisioning work performed before the hackfest to prioritize areas of the DevOps pipeline to optimize. The following DevOps practices were chosen for implementation:

The hackfest ended with a complete solution showcasing an end-to-end flow from user logon to environment deployment and configuration. The POC showed the following:

By automating the existing process, RISCO managed to optimize and accelerate an important part of the dev/test process that used to take days and required manual work.

“It took us a week to build a new environment. With our new self-service portal, we can provision an entire environment with a single click. The entire project helps us by saving over 200 hours per month.”

The following GitHub repository includes reference code for the self-service web portal as well as an example Resource Manager template that includes a Windows virtual machine with a Puppet virtual machine extension:

Please note that for the code to run, Azure subscription information needs to be edited, specifically in the web.config file.

Thanks to Elad Hayun, from U-BTech solutions, who has been a key contributor during this engagement.

Also, thanks to the Puppet team in London for providing remote support during the hackfest.