FTIS uses a sensor-enabled cricket bat connected via Bluetooth to an iOS companion app to send messages to Azure IoT Hub. The Azure IoT Hub is connected to an Azure Stream Analytics job that processes the sensor data in real-time. This results in low latency feedback for both the sports professional and the coach, allowing both parties to quickly and efficiently observe their performance after every hit. 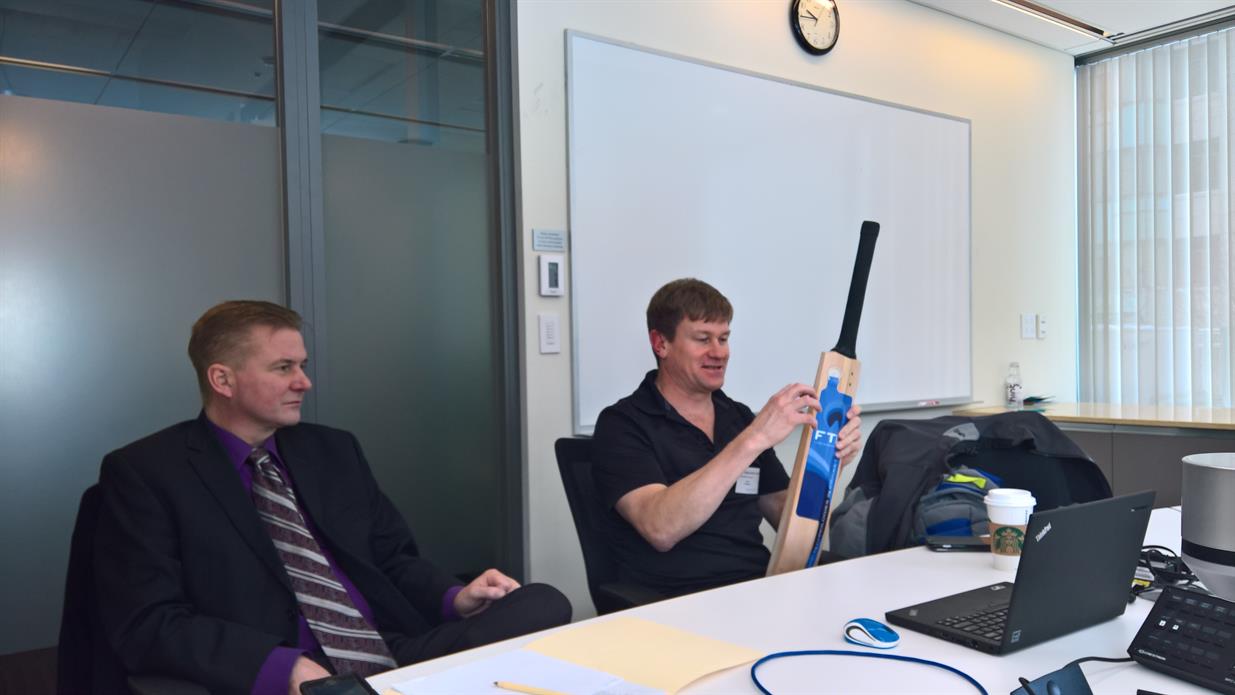 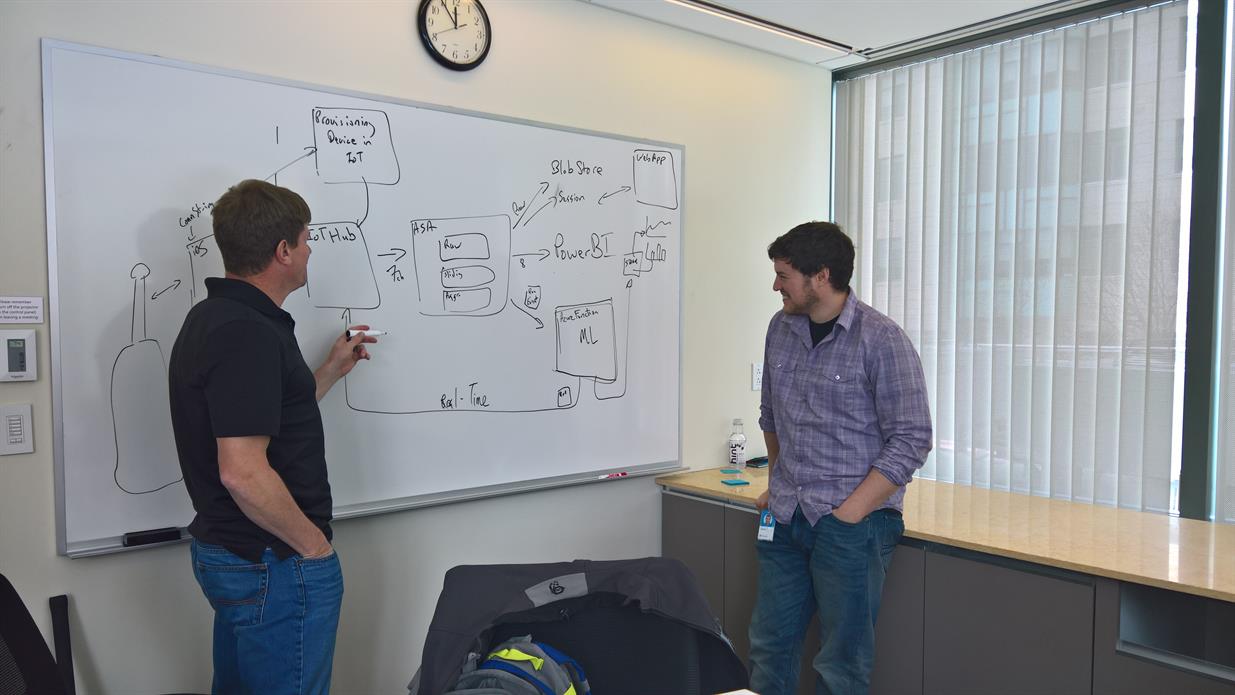 The team included the following:

Future Technologies in Sport, Inc (FTIS) is transforming coaching and player performance, as well as umpiring and audience engagement in cricket and other batting sports, via their proprietary sensor and mobile app based solutions.

FTIS has the only technology that can reliably, accurately, and affordably deliver:

Independent research indicates that the ability to measure these variables can enhance batting performance.

The sensors are integrated into the bat; a Bluetooth device on the bat transmits sensor data to the cloud. The data will be distributed to apps for:

FTIS is collaborating with a leading international cricket team on an R+D partnership that will enable their elite players to understand how their Power Hitting compares to their peers and what variables are contributing to their results.

The program is a continuation of the relationship that FTIS’s founders built when the International Cricket Council’s (ICC) tested the cricket technologies used by the Decision Review System (DRS). FTIS’s founders were the principal investigators in the MIT led program.

In the current environment, giving cricket players immediate hitting stats feedback is an involved process. Sensors must be placed on the batsman and expensive infra-red cameras must be set up in the batting test location. Future Technologies in Sport solved this problem with an easily installable sensor that collects data metrics on the swing.

The current prototype collects sensor data and transmits it to a specialized app running on an iOS device. Once the data is collected, the prototype emails the data to a user, who then runs it through FTIS’ proprietary algorithms that returns a variety of metrics, including where the ball hit the bat.

The team wants to use Azure IoT to turn this prototype into a solution that will provide feedback to the coach and player within seconds, along with storing data for future analysis.

“We spent two productive days with Microsoft building the core infrastructure for our cloud solution. The Azure platform is robust, intuitive, secure and scalable and will allow us to bring our unique smart product to market with confidence.”

Future Technologies in Sport and Microsoft teamed up to create a proof of concept (POC) with Microsoft Azure services that would collect the sensor data from the iOS companion app.

The POC had the following success steps:

The solution was developed over the course of a few days at a hackfest held at the Microsoft NERD office in Boston, Massachusetts.

The overall architecture is as follows: 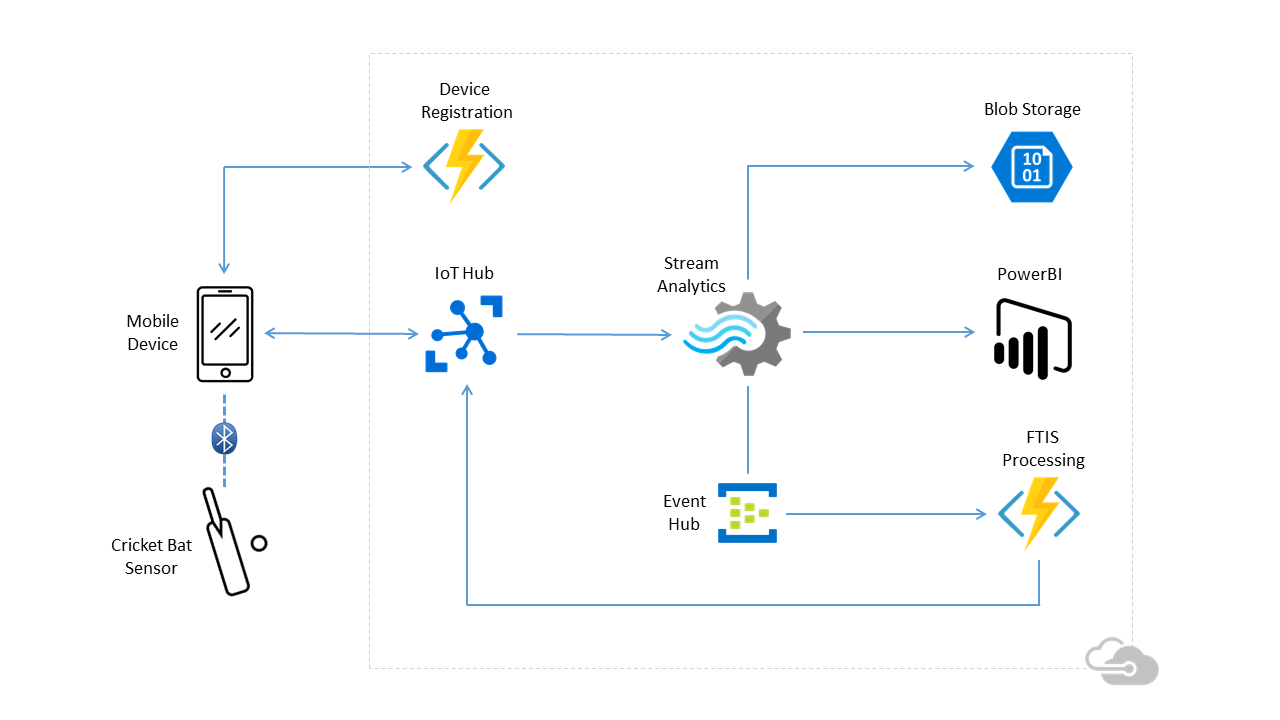 Register and send data from iOS

Each mobile device running the iOS app needs to be registered with the IoT Hub. If there is a client controlled device (like the iOS-controlled companion app in this scenario), we leverage an API to abstract the connection to the IoT Hub so there are no hard coded connection strings in the source code. We also use a token service to leverage the strong client authorization to determine if the user should be granted IoT Hub access. To access the token service: 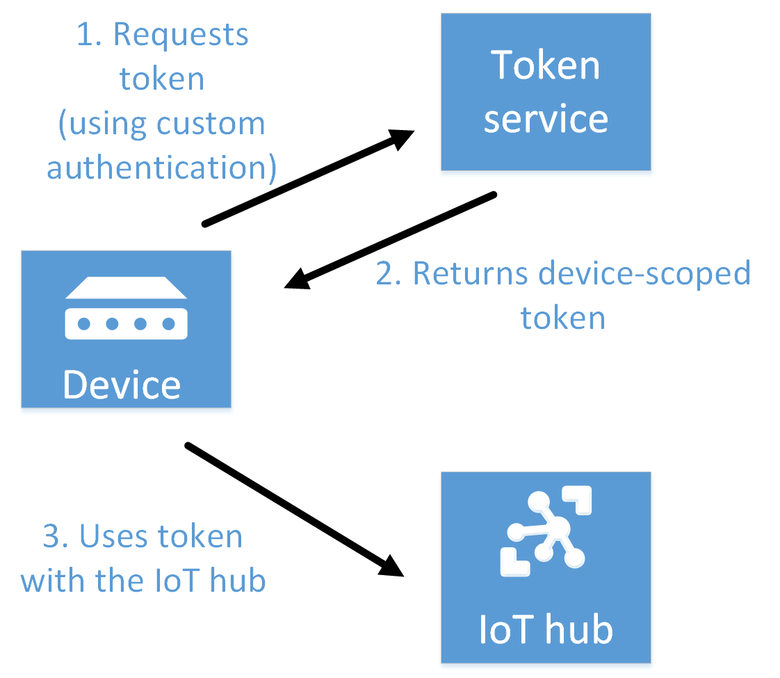 We set up an Azure Function so the POC can register and supply SAS tokens. Devices can use the tokens to connect with the IoT Hub to send sensor data to FTIS’s algorithms and long term storage. FTIS will integrate the registration code into the existing secured API.

Each SAS token returned is scoped so the specific device can only send data to Azure IoT Hub; it cannot manage the device registry. Azure IoT Hub can also disable individual devices via the Management Portal if a device is compromised.

To send sensor data to IoT Hub for processing, the mobile device uses the iOS companion app and the MQTT protocol. There is no IoT Hub SDK for the iOS platform; the MQTT protocol was chosen because of existing iOS library support.

Both the app and the code additions were written in Objective-C. Here’s an excerpt of the Objective-C code to connect to IoT Hub from the iOS companion app:

Every time the bat hits the ball, the iOS companion app sends a JSON data object containing the captured sensor data to the Azure IoT Hub, where an Azure Stream Analytics job processes the data. The data has a device ID value the rest of the system uses to determine which user the device belongs to.

“Real time data processing, storage and communication happens seamlessly on the Azure platform – it was a lot easier to implement than I suspected”

The raw data is stored in Blob Storage using a simple query:

The raw data is flattened via a second, more in-depth query. The flattened data is then ingested by PowerBI. PowerBI parses data more easily when it doesn’t contain deeply nested properties and arrays.

Process data and send to device

The data is passed from Azure Stream Analytics to a Azure Function that processes the data and sends it back to the device:

Once the mobile device receives the data, it can be displayed for the coach to review:

The proof of concept was a success; FTIS is working to complete the iOS companion app and integrate their algorithms into the final product. The entire solution is expected to be rolled out as part of a pilot program with selected players and coaches. The feedback they receive will be used to improve the offering before it is rolled out to a wider clientele.

“When you are setting out to transform a sport, you need a technology platform that can grow and adapt to your changing business plan. Microsoft Azure has quickly shown us it can deliver on our needs now and in the future.”

Tailoring each output’s separate query within Azure Stream Analytics makes the data easier to ingest, especially for PowerBI. The sensor data returned from each device is complex and nested, so flattening some of the JSON properties back to the top level was beneficial when visualizing the resulting data within PowerBI.

Producing a workable code example for connecting via MQTT to Azure IoT Hub using Objective-C was extremely valuable as there were no existing Objective-C examples or documentation to use for reference. It also resulted in improvements to an existing and widely used MQTT library in the iOS ecosystem.

We can now share this knowledge so you can successfully integrate with Azure IoT Hub. Here are two samples:

FTIS plans to integrate a Power BI dashboard as part of their product offering. Visualizing player data over extended periods of time will be a crucial step in studying and learning about the effectiveness of the various prescriptive advice and coaching techniques currently put into practice within the cricket industry.

FTIS is also planning to consult with Azure experts within Microsoft, to fully integrate their data algorithms into the real-time feedback solution as part of the final product.

“The ability to transform the raw data into usable information on the cloud and deliver it back to a mobile device is a step change for our offering.”

As the team developed the solution we came across several key resources: