To audit the pollution in the Matanza-Riachuelo River, the Buenos Aires city government joined forces with Microsoft to build an innovative IoT solution that used a fleet of drones. 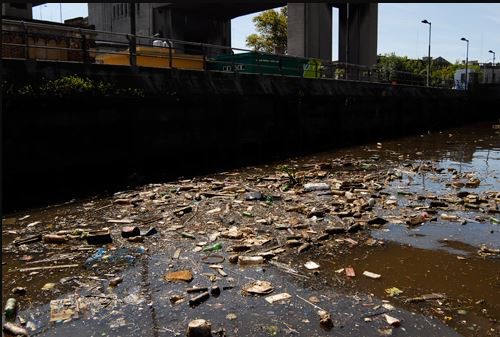 Buenos Aires, founded in the sixteenth century, is Argentina’s capital and one of the most visited destinations in South America. The population swells every day as workers commute into the city and tourists arrive to explore its many cultural and historical offerings. The Buenos Aires city government, Gobierno de la Ciudad de Buenos Aires (GCBA), recognizes the value of technology in managing a large and complex city, delivering better resources for citizens, and supporting future growth, so it actively works to find new and innovative IT solutions.

These solutions include helping to make city operations more efficient, and providing information and services to city residents and the many commuters and tourists who visit the city every day. To address the need for efficient information management, Buenos Aires recently created the Ministry of Modernization. This ministry works with organizations across all areas of city government to provide training and technology assistance for modern effective governance. To help meet its modernization goals, Buenos Aires has established relationships with key technology companies; in addition to local IT firms, the city has built a valuable relationship with Microsoft.

The greater metropolitan area is home to 15.6 million people, and is bordered by General Paz Avenue and the Matanza-Riachuelo River, one of the most polluted rivers on earth.

The city government teamed up with Microsoft to build an innovative IoT solution to audit the pollution in the Matanza-Riachuelo River by using a fleet of drones.

The Matanza-Riachuelo River is a 64-kilometre (40 mi) waterway in Argentina that originates in the Buenos Aires province and defines the southern boundary of the city of Buenos Aires. Approximately 3.5 million people live in its drainage basin of 2,240 square kilometers (865 square miles).

The river is polluted from large amounts of industrial waste generated by numerous factories along the river, especially tanneries. Among the most dangerous contaminants are heavy metals (arsenic, chromium, copper, zinc, and lead) and waste water from the basin’s saturated layers. Chromium, for example, had a mean value in the soil of 1,141 parts per million (ppm), which is significantly higher than the recommended level of 220 ppm. A 2013 article published in Salud Colectiva found that 80% of water samples taken from wells near the Matanza-Riachuelo River basin were not safe for drinking due to contamination. For reports about different aspects related to Cuenca Matanza Riachuelo (CMR), see the ACUMAR website.

To audit the pollution in the river, GCBA wanted to create a drone solution that measures the water conditions meter by meter by using sensors, and then posts this information as points on a map.

In the proposed solution, the drone will land and take off from one point to another, reading the sensors and storing the data in local memory. After that, the device will synchronize the data to Azure IoT Hub and the developed backend.

The sensors will measure the following:

In our first brainstorming meeting, we generated a lot of ideas. GCBA had already developed drones, but they were not connected to the cloud, so we discussed the solution architecture and the technologies we needed to make that happen. It was determined that the drones would have a Raspberry Pi 3 running Windows 10 IoT because it has an important versatility in terms of process power and connection to sensors. Attached to the Raspberry Pi 3 would be sensors and a GSM module to send the data to the backend services.

After we identified the problem and possible Azure services that could be connected to the solution, we realized that some of the services would not be necessary in the first stage. The initial diagram in Figure 1 shows this architecture more clearly (that is, it includes services for future features), and the sketch in Figure 2 shows the current solution (what we ended up using). 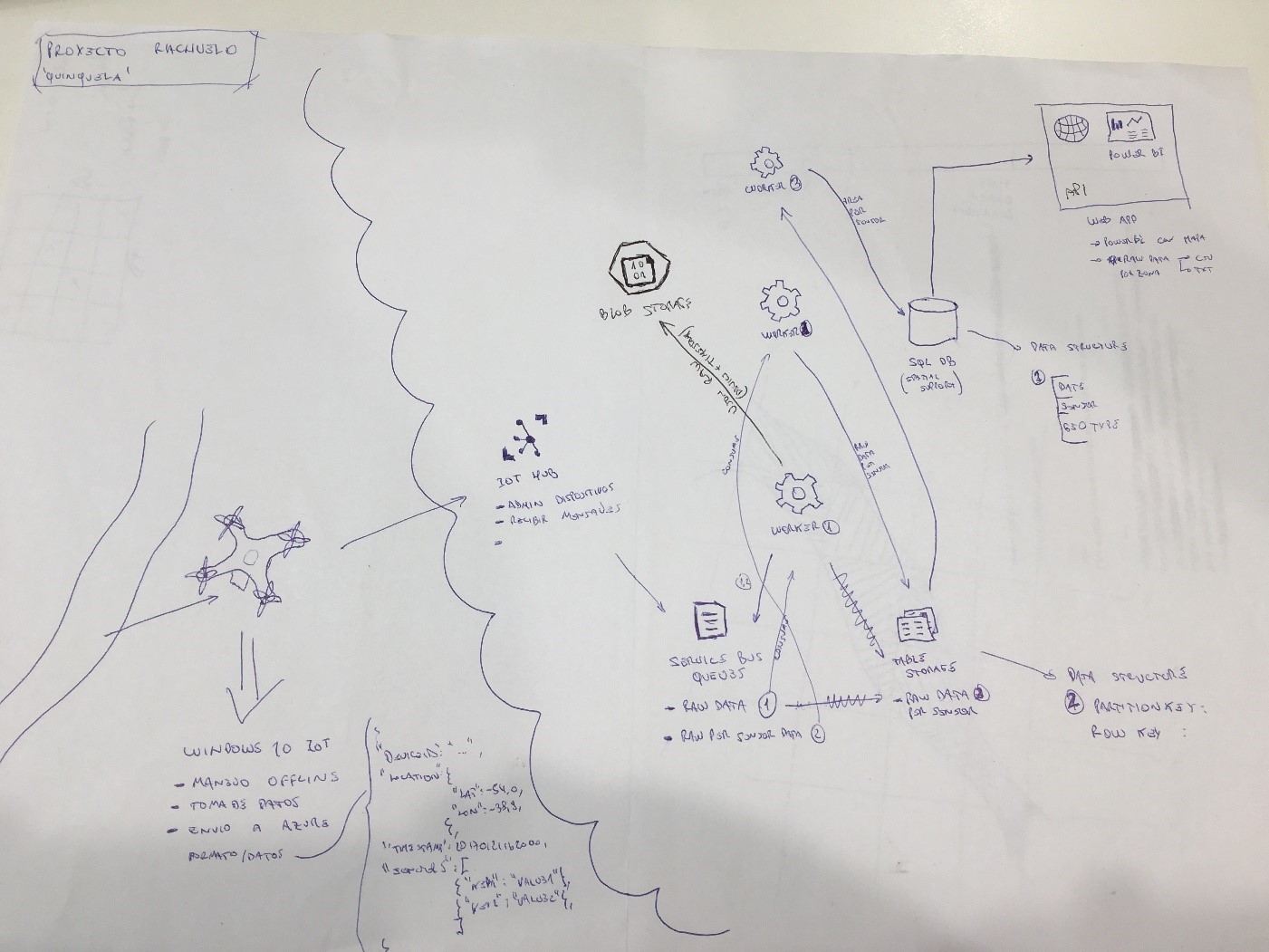 Although there are many different services involved, the most critical piece of software resides on the Azure IoT Hub. This service acts as the bi-directional connection between the drones and the Azure cloud, triggering and ingesting the rest of the process.

The second part, related to data consumption, was also designed during the meeting and looked like this:

This initially proposed architecture had some issues we would only later perceive. First, we realized that having the drones taking off and landing every meter had a dramatic impact on battery life, so we decided to change the approach and build a drone-driven boat.

Also, we had a delay in the delivery of the sensors due to Argentinean customs, so we had to adapt the solution to start with a fewer number of sensors, and configure it so we could add new sensors to the device later.

The JSON sent by the device to the backend now is structured to dynamically support type and number of sensors as follows.

With this design in place, we solved both issues: 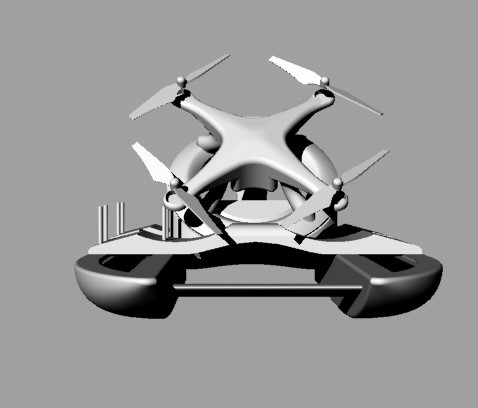 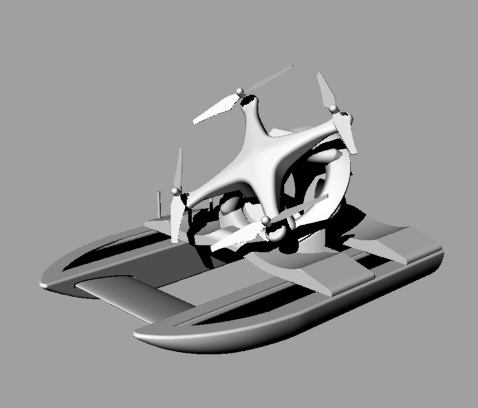 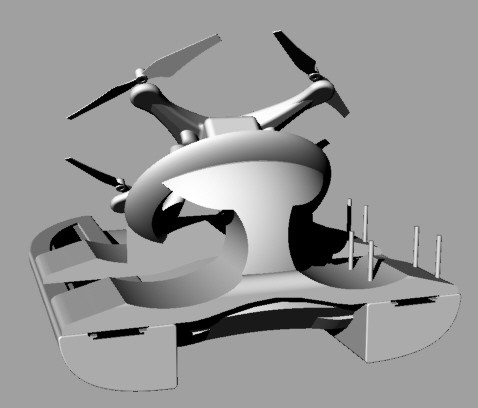 We used Azure IoT Hub and device registration. Communication to the cloud is done by using Shared Access Signatures (SAS) with a short timespan duration. The following class IotHub shows how the SAS token is created:

The following script shows the table required to run the application.

We used the Raspberry Pi 3. The customer had designed and built their devices by using parts of commercial devices. The shell was also designed and 3D-printed by the customer. The device has 1 GB of memory and uses battery power and Wi-Fi/Bluetooth for connectivity. It runs Windows IoT.

This combined effort from Microsoft and GCBA delivered a successful project that gave the partner the solution needed in a very time-efficient manner. Building the solution on top of the Microsoft Azure cloud platform was a key component to achieving the desired results in the expected time frame. The project was implemented in four weeks with a dedicated technical evangelist on the account, who helped with all the problems that came around.

The good relationship built during the project resulted in an open door to Microsoft at Things Expert and the possibility of developing other solutions together, some already being discussed by the team.

“Our partnership with Microsoft on the Quinquela project, especially through Alejandro Banzas and Marcelo Felman, was a fundamental component in getting our technical team up to speed on Azure technologies, and in building not only Quinquela´s Azure-based backend, but also getting ideas for new projects to empower Buenos Aires citizens through technology.”

The GCBA team defined a macro plan in three phases to make an impact on pollution in the river: