Managing heating systems in smart buildings is becoming a key part in the energy transition in France. We need to do more than collect and store huge volumes of data from connected systems. Data must push the boundaries of today’s solutions. ENGIE Cofely and Microsoft joined efforts to work on what could be the next generation energy management platform by using Azure in general, and Azure IoT Hub and Azure Machine Learning in particular.

ENGIE Cofely (formerly Cofely Services) is an entity in the ENGIE Group (formerly GDF Suez) and one of the leaders of the energy transition in France. As an energy and environmental efficiency services company, ENGIE Cofely proposes solutions to businesses and communities on how they can use energy more efficiently and reduce their environmental impact. The company expertise is based on the long-established know-how of 12,000 collaborators in the following domains:

ENGIE Cofely has thousands of connected systems (such as different brands, models, and versions of heating systems) that generate a large volume of heterogenous data (devices sending a few bytes of telemetry messages several times an hour in normal conditions) through different kinds of networks (private networks and Sigfox networks). This situation is becoming more and more challenging with time as new systems are deployed and more data is collected.

The big data environment can be quite difficult to set up and maintain; the cloud is often a good way to make things easier while being able to scale on demand.

ENGIE Cofely has already experimented with technologies such as Azure Data Lake, and now they are facing two new challenges:

ENGIE Cofely saw a great opportunity to set up a hackfest with Microsoft and experiment in those areas.

How can we collect data from existing and future systems?

Before using Azure Data Lake, connected systems must send their data to the cloud. The solution must be able to:

One of the goals of this part is to increase the top line by raising the number of possible customers.

How can we get intelligent insights from raw data?

After using Data Lake, prepared datasets must be analyzed. In this case, the analysis consists of checking the data quality by having machines detect the few anomalies that should be investigated by humans.

Today, the data collected is transformed and sent to a relational data warehouse. As data grows, they need to define their next generation architecture. For this purpose, they already did a proof of concept (PoC) that shows how to get the data from Azure IoT Hub to Azure Data Lake, and from Azure Data Lake to produce a dataset that can then be analyzed by the LOB teams.

Data quality is one of the core subjects that the teams are interested in. For example, it is essential to detect when data corresponds to an anomaly. The anomaly can either be due to an issue in the data retrieval process or in the system itself. Detecting such an anomaly is relevant in both cases.

One of the goals of this part is to increase the bottom line by decreasing costs, thanks to better data quality leading to better operations.

Because ENGIE Cofely had already studied how to get data from Azure IoT Hub to Azure Data Lake and manage it there, we focused on other areas. 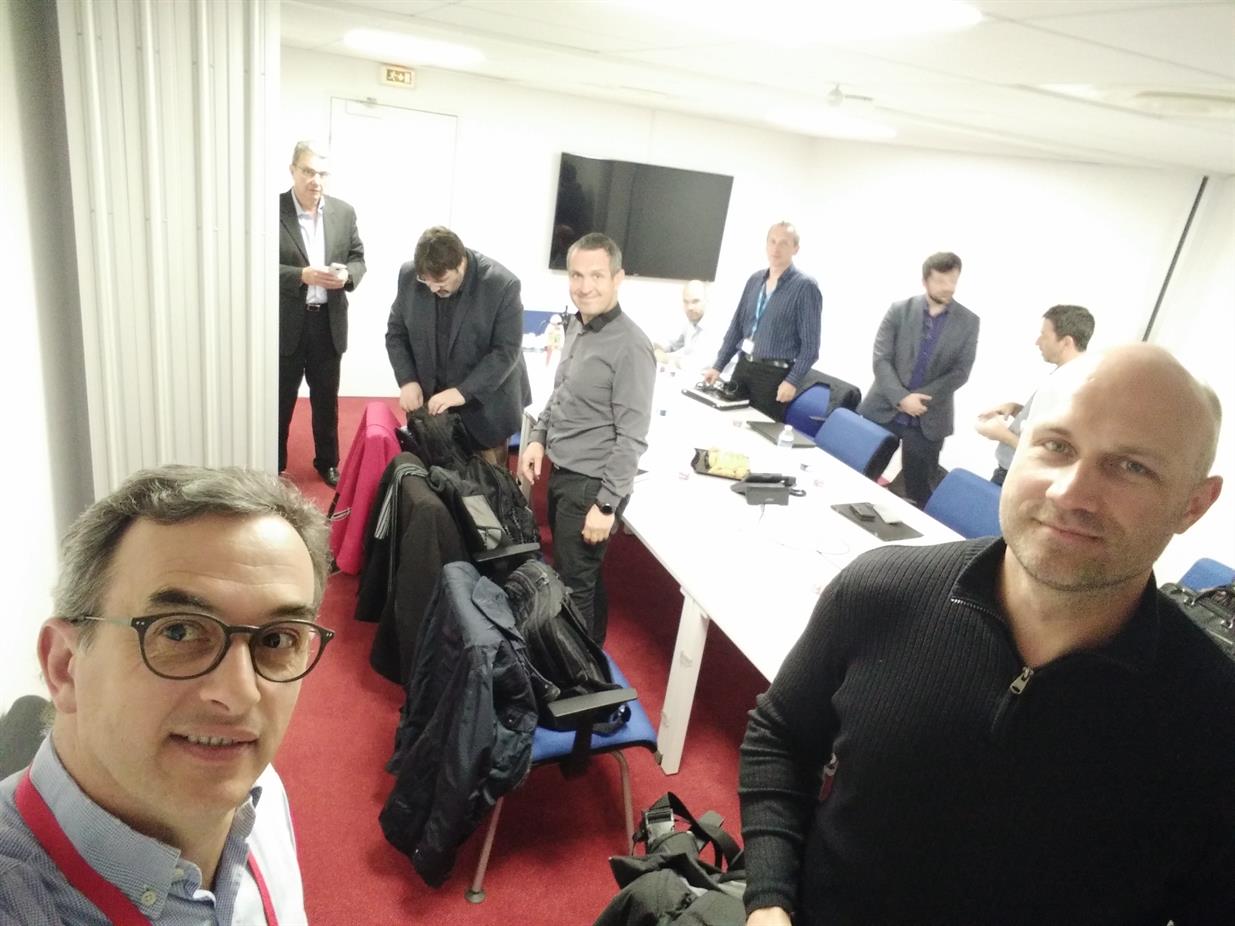 Getting data from real systems into IoT Hub

We spent some time figuring out whether to host the Dev I/O instance in ENGIE Cofely datacenters or in the cloud. To avoid breaking an existing robust and secure configuration, we decided to use the on-premises option.

The connection between Dev I/O and IoT Hub will go through ENGIE Cofely’s highly secured datacenter. IoT Hub supports AMQP, MQTT, and HTTPS, and the SDK made it easy to switch according to our needs. We ended up choosing HTTPS for its ability to go through the existing firewall rules.

Because of its gigantic ingestion capacity, IoT Hub will be able to deal a direct connection to thousands of other sensors by using an LPWAN such as Sigfox or LoRaWAN, in addition to Dev I/O.

To analyze the data, we needed to:

A new connector was easily created by using the Azure IoT Hub SDK. By using a simple connection string parameter, by default all messages are pushed to an IoT Hub instance over a secured HTTPS connection, but AMQP was the preferred solution for security and performance reasons.

To double check the effectiveness of the connector, we used Azure Time Series Insights connected to IoT Hub and immediately started exploring the data. 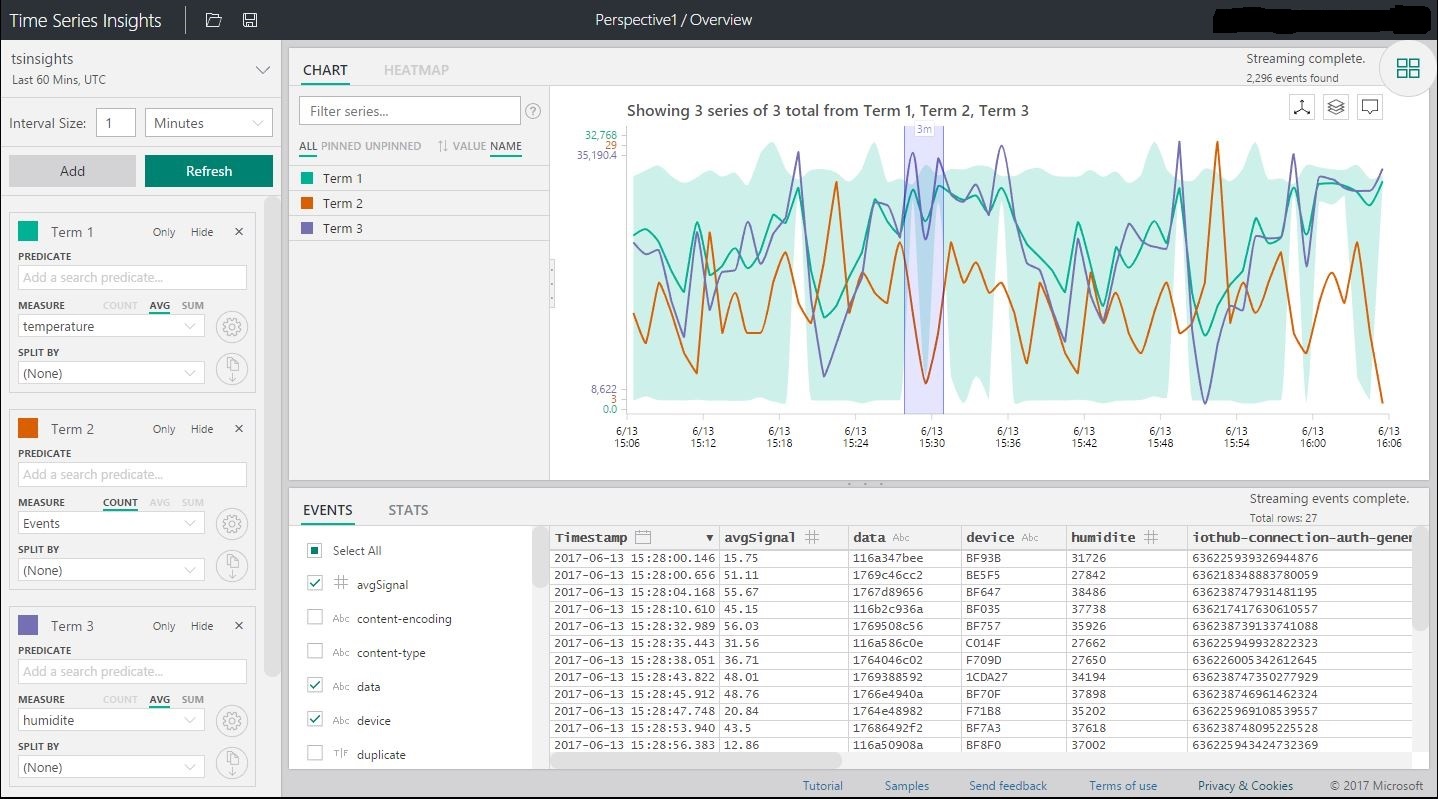 In this part of the hackfest, we basically tried the architecture in the following diagram. 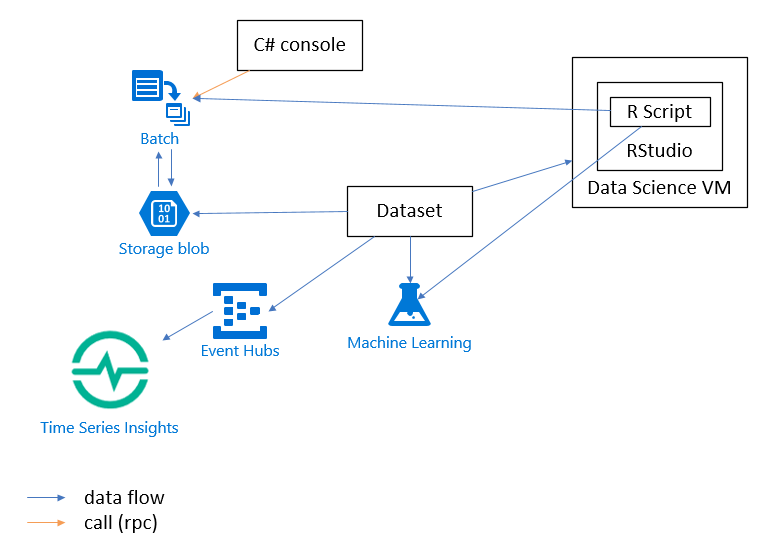 A dataset was created by issuing several SQL statements in the existing data warehouse. We took that shortcut because we knew that ENGIE Cofely knows how to do this from data that arrives from IoT Hub (by using Azure Data Lake tools).

The resulting dataset looks like this, and has about 3.5 million rows:

The columns contain the following information.

Measure type label is the result of a strict codification.

The first thing we wanted to do was visualize the data.

You can view a recent video on this service: Cloud Cover Show, episode 229.

We wrote a simple C# program that reads from the dataset and injects data into an event hub where Time Series Insights can consume it (note that this sample code can be enhanced by sending data in batch for better performance; in our case, it was good enough). 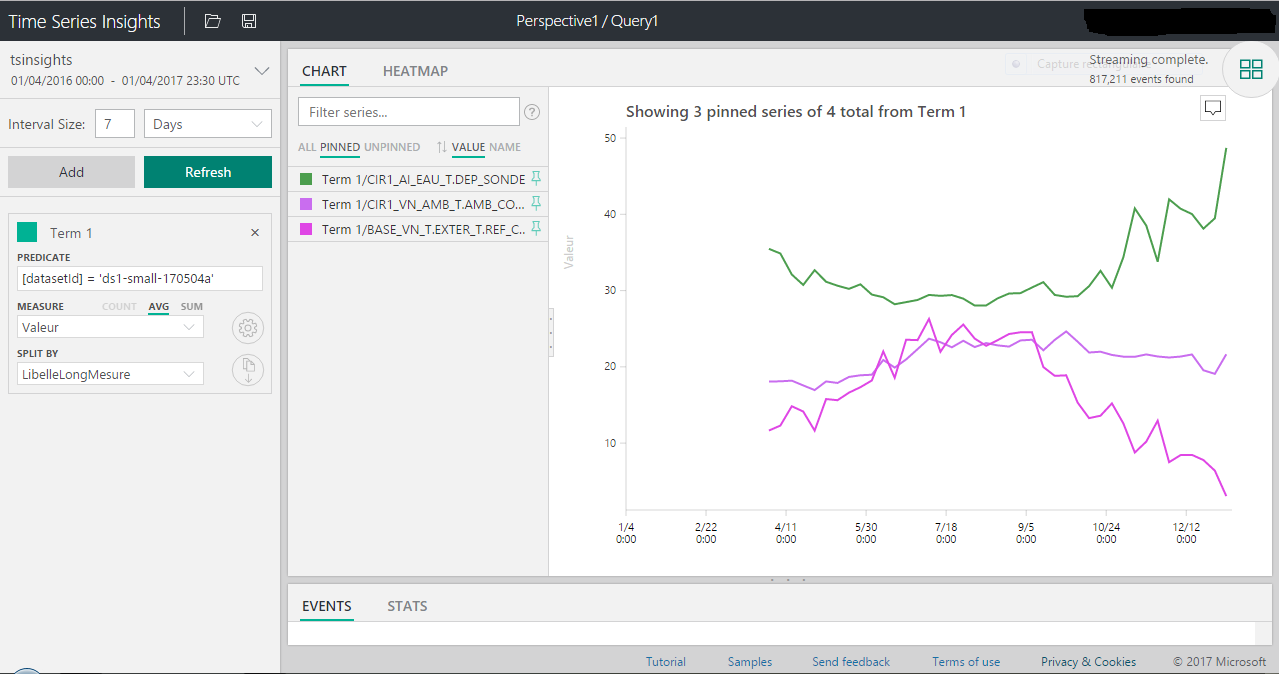 The tool allows us to compare different charts side by side and different time series in one chart. This way, we could see how different installations behave. 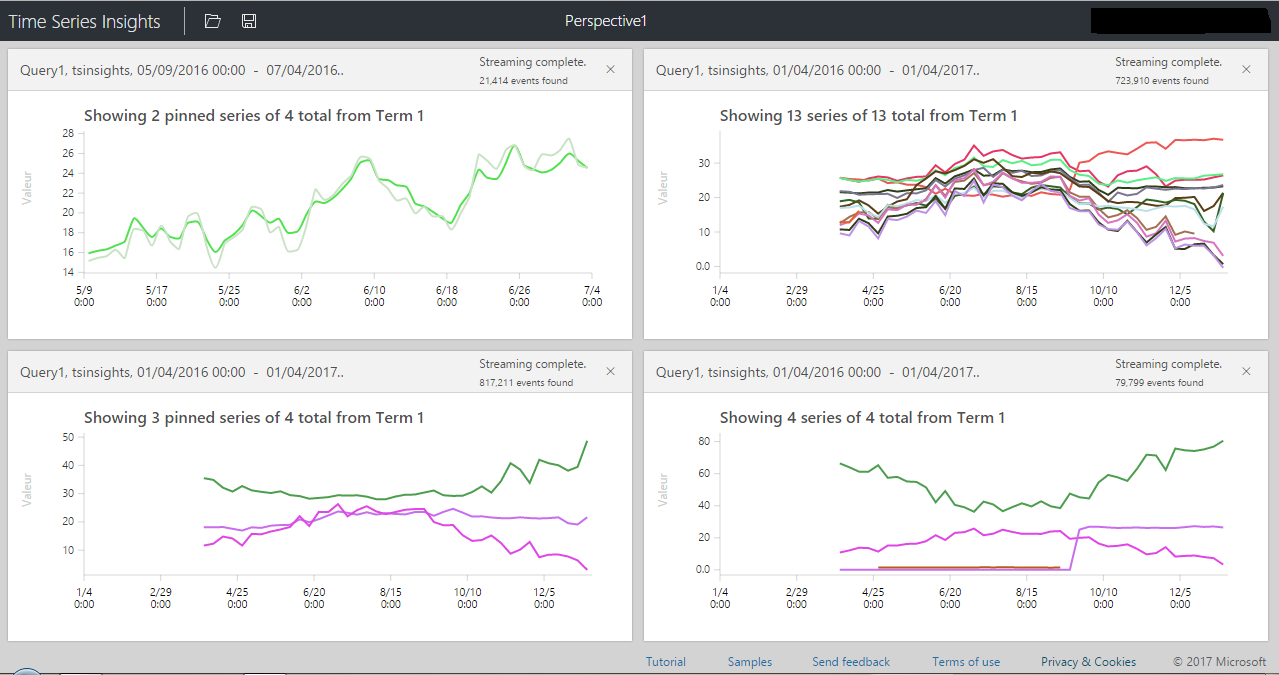 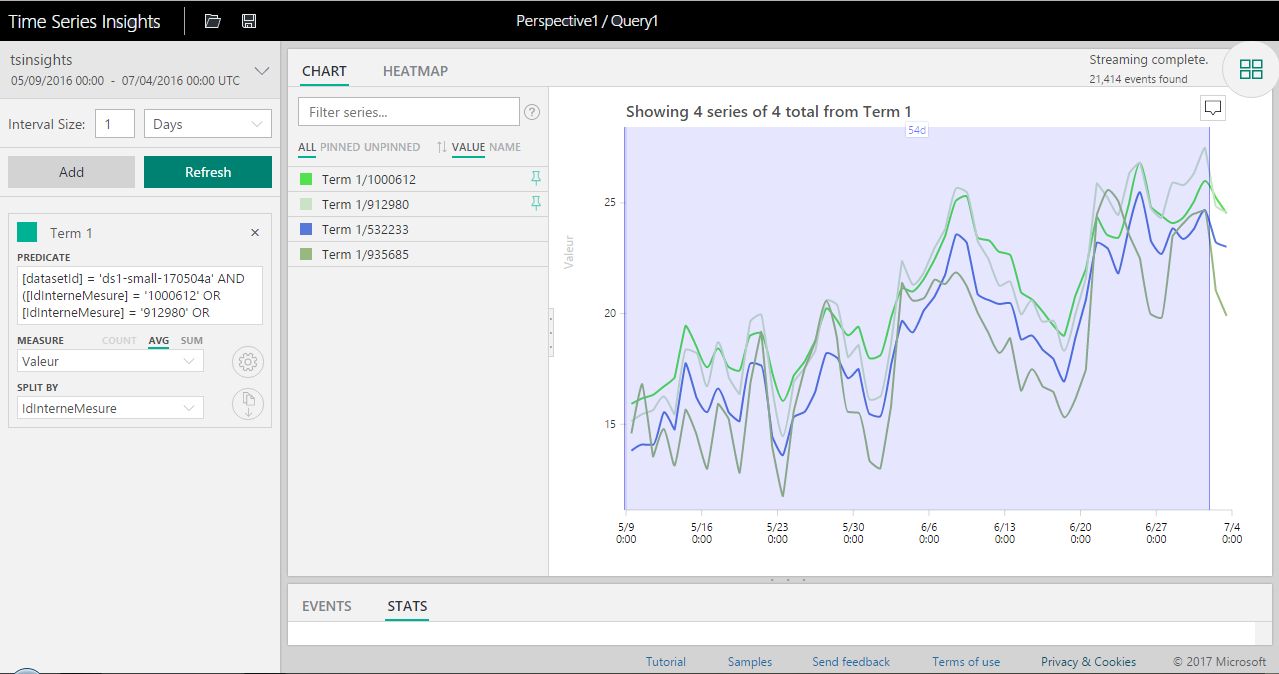 Later, we also used the tool to draw different time series that were analyzed with R time series clustering to see if we could correlate the clusters with what we saw.

The Time Series Insights tool was a good way to visualize the data. We tested it just a few days after its first preview release so the features were mainly limited to visualization. There is no automated anomaly detection so far, so we tried a few other things.

The first thing we tried was Azure Machine Learning’s module named Time Series Anomaly Detection. We extracted a time series for one installation and one measure type and fed the module with it.

The dataset columns were:

The Machine Learning experiment resembles that in the following diagram. 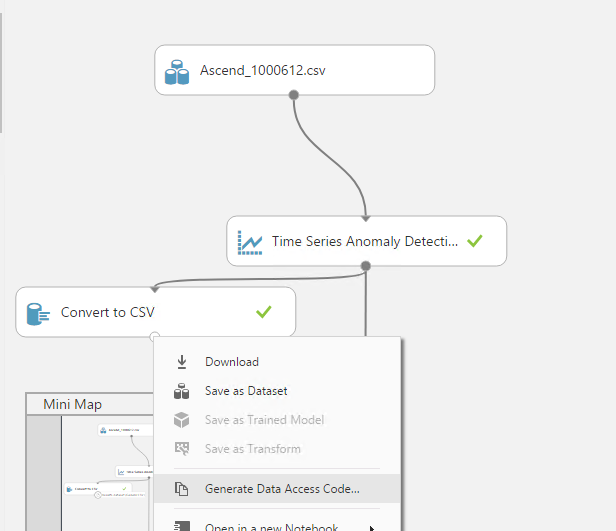 From a Jupyter notebook in R, we executed the following code. 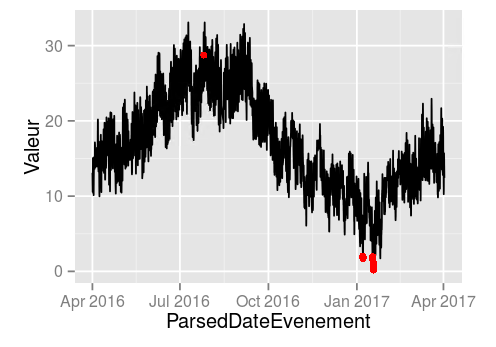 In this case, the red dots show on a one-year time series when summer or winter is coming.

In our case, these dots were not anomalies in the real world. This still can remain an interesting way to detect other kinds of anomalies inside each time series.

We then worked on an R script to implement the following idea. By defining clusters of time series, we could see in each cluster the ones that are far away from their centroid, or the ones that are part of clusters with very few items. These items can be considered as anomalies and escalated to humans for investigation.

The script we came up with still needs enhancements on how to cluster the time series. Still, the iteration we used is the following.

The generated PNG file shows two time series that are quite high in the cluster dendogram. They are part of clusters of one item and can be seen as anomalies. 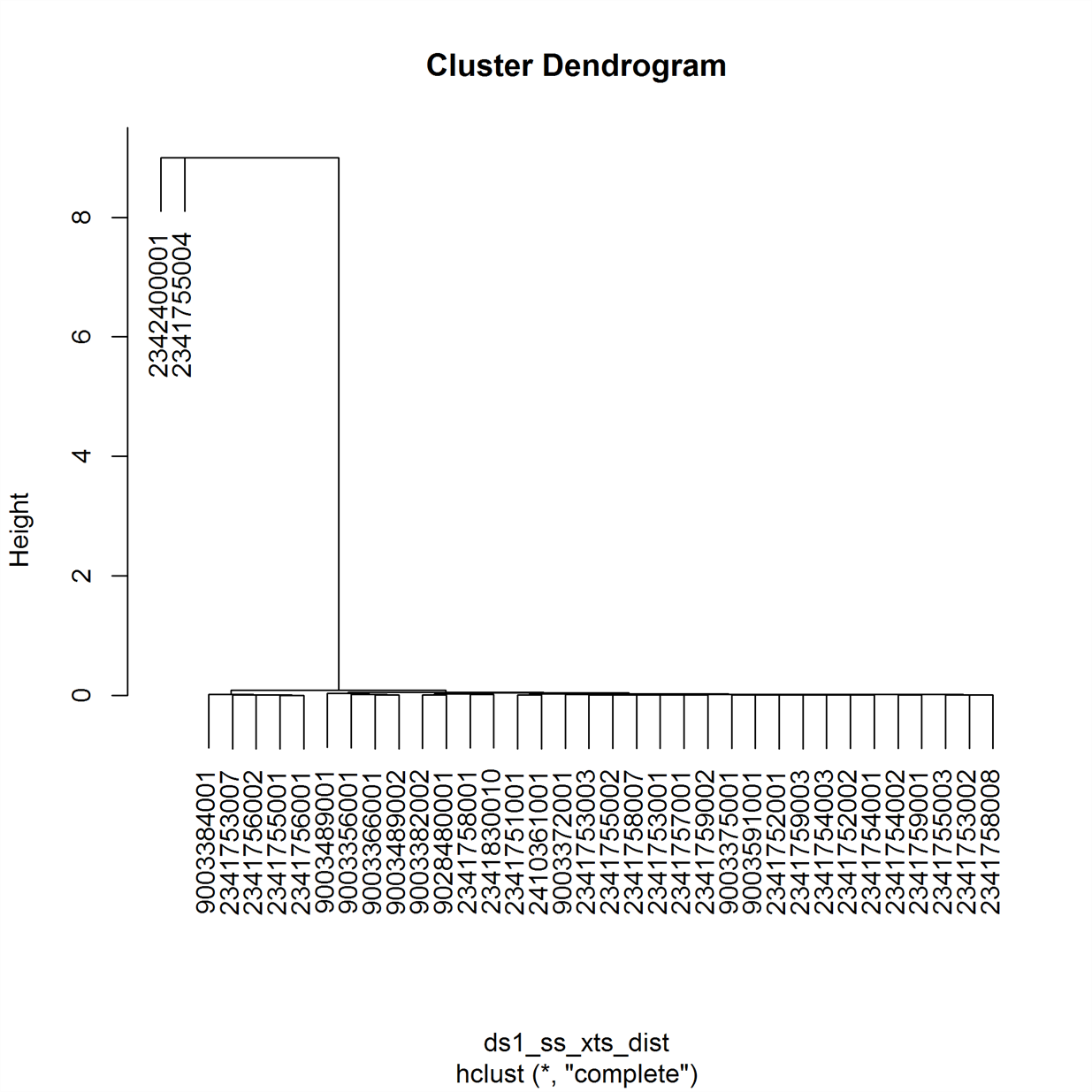 For that particular dataset, we investigated and found that the two time series had much fewer data points than the others.

After this kind of result is found for one sample dataset, we can operationalize the execution so that data can be monitored automatically.

Part of the operationalization conditions is that the script can be ported easily. This includes constraints such as having similar versions of R, or being able to use the same modules.

In these environments, only the most common modules are available, and it is possible to make any module available by providing a ZIP file. When there are a number of modules to add, it is also a good idea to leverage miniCRAN. Following are a few links to useful documentation:

For example, in our case, we could create miniCRAN by using the following script in the source environment:

Then, in the executing script in Azure Machine Learning, the following code can be used to install the packages included in the miniCRAN zipped repo.

This was okay with Microsoft R Open 3.2, but this was a different version from R 3.3, which David was used to. Also, ENGIE Cofely doesn’t have low latency requirements for this use case because most meters send data at a rate of 15 minutes.

Therefore, we wanted to check whether Azure Batch would be a better fit.

As its name suggests, Azure Batch doesn’t provide low latency, but is a good fit to execute compute jobs at scale. Azure Machine Learning also has Batch API, so we wrote some comparisons on the white board. 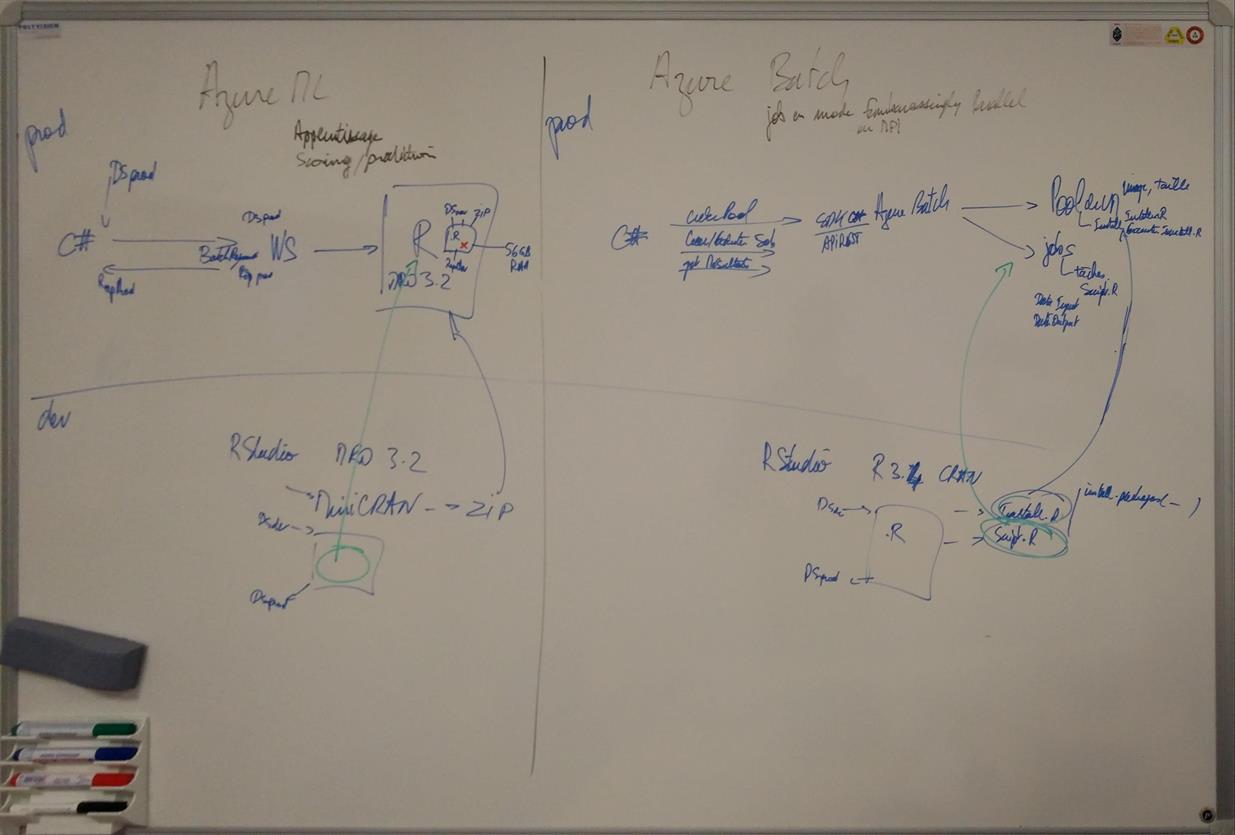 The main ideas on the white board are outlined in this table.

We decided to use Azure Batch for this workload because we could choose the R runtime to use, and it gave us some flexibility on the way we package R modules and the size of the nodes.

During the PoC, we used the Microsoft Data Science Virtual Machine, which is a pre-packaged virtual machine image with Windows, R runtime, and many other tools. The advantage is that we didn’t have to package R runtime installation. We also had the tasks installing the required R modules exactly as we do in an interactive R Studio environment. That was simple to implement.

In production, it would be better to start from a plain Windows image, and then install R runtime and the required module from a miniCRAN ZIP file, just after a node starts in a pool. This will optimize Internet usage, execution time, and so on.

Because ENGIE Cofely uses C#, we wrote a sample in C#, starting from DotNetTutorial.

Following are some code excerpts.

The main scripts that are included are the following.

Following is an example of the batch job running, as seen from the laptop launching and following the job. 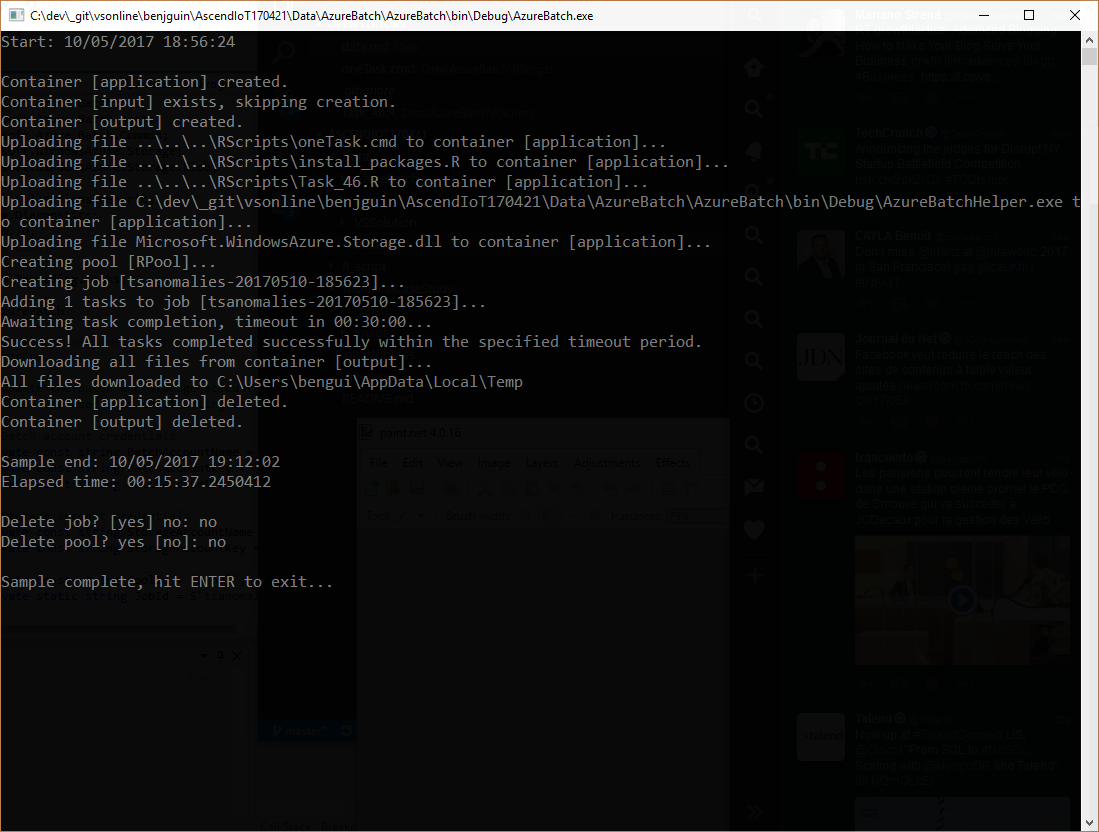 Following are some screen shots of the Azure portal showing the same job running in Azure Batch. 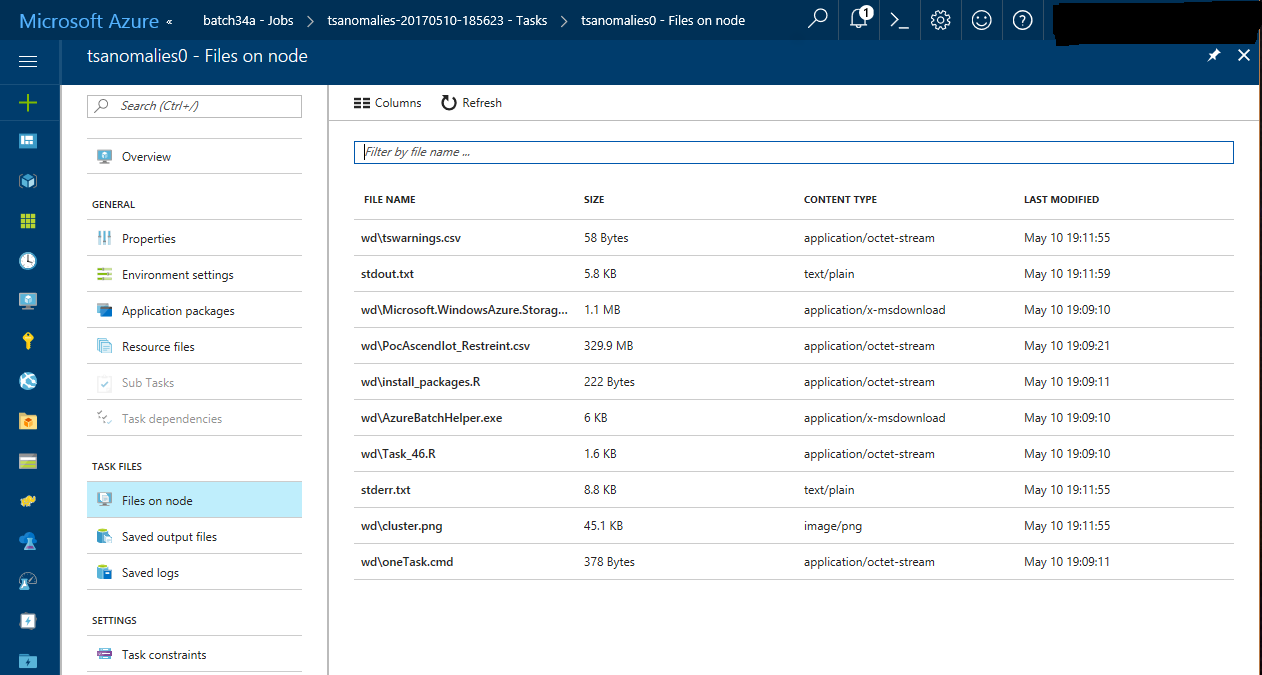 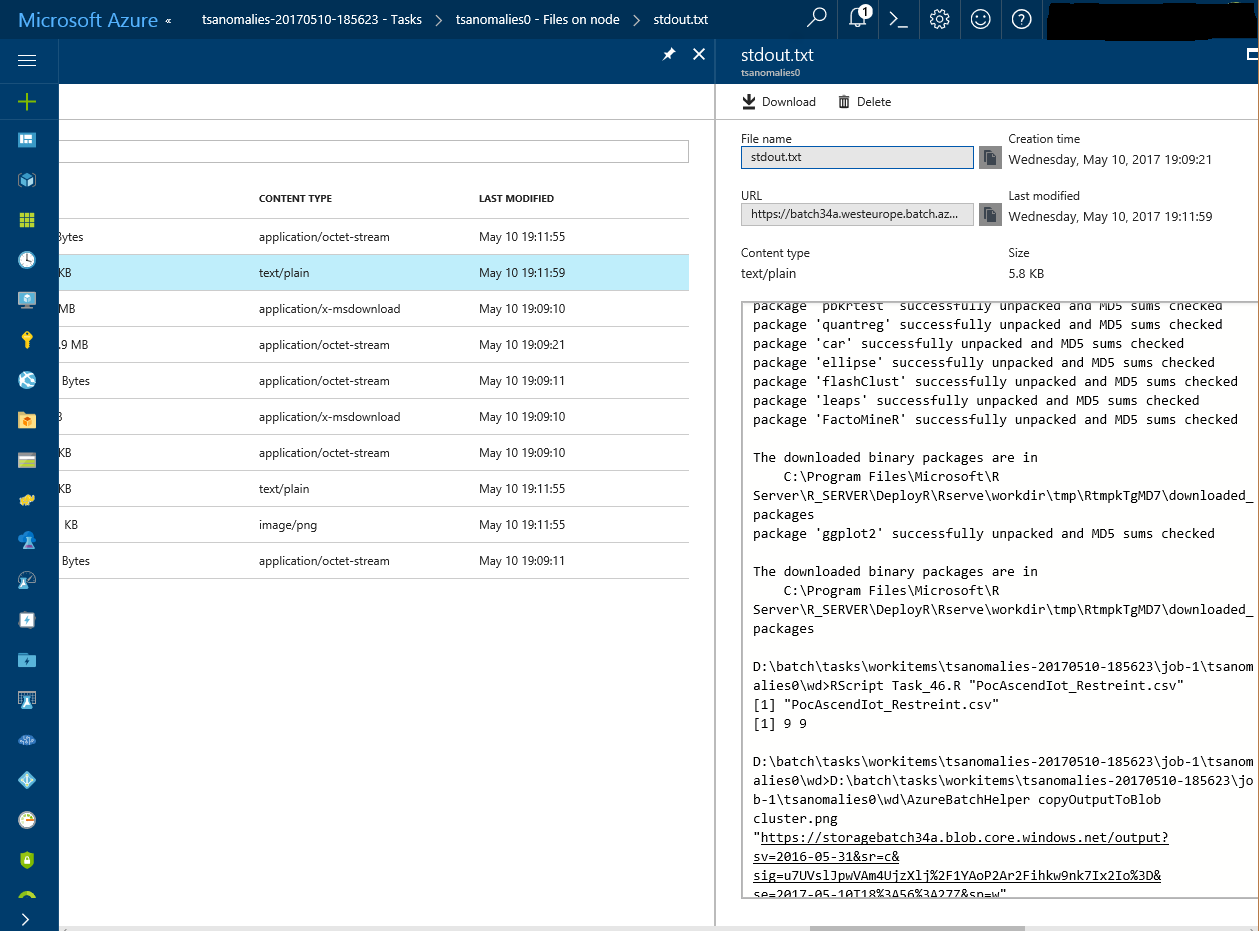 As you may have noticed, the C# code downloads the result files from the blob storage. After the execution, the user can get the results from the machine that ran the C# code.

In our case, the two important files are the PNG showing the clusters (shown earlier) and a CSV file containing the installation IDs that require some human investigation.

During this hackfest, we were able to achieve the following:

Thanks to what was done, ENGIE Cofely can now move to another phase to test and validate other aspects of the solution.

During the hackfest, we learned that, in some cases like this one, R scripts can be well operationalized with Azure Batch.

Following this experience, the story told by Cofely highlights the added value of mutually proposing a shared environment to the functional teams and IT teams simultaneously: 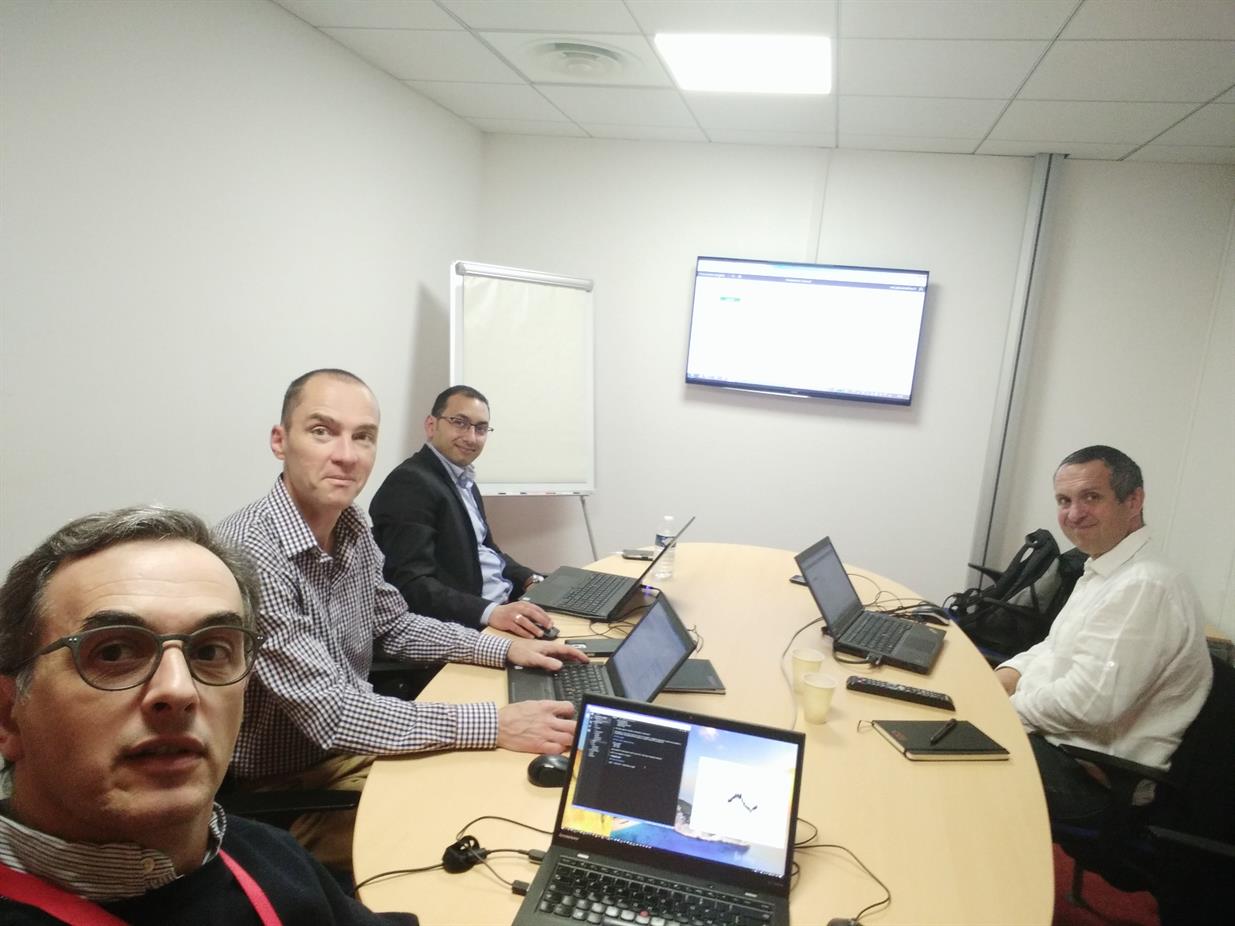