Burgan Bank Turkey is the first bank in the Middle East and Africa to develop a consumer mobile banking application by using the Xamarin platform. While doing research for a future mobile development platform, the Burgan Bank mobile team started to work with a Microsoft technical evangelist. Together, the team built an application on Android and iOS with 100 percent code sharing. Empowering .NET developers with mobile application capabilities is going to be a new mobile approach for enterprise company developers.

The first considerations for cross-platform development technologies are user experience, performance, and ease of using development tools. These determined the strategic decisions of this collaboration. This joint effort is a great example of how Azure services can be implemented into enterprise solutions and financial services.

“In alignment with Burgan Bank digital banking strategy, we investigated several solutions to enable our mobile banking platform. Microsoft offers us a strong, reliable, and ease-of-use platform in order for mobile banking to develop our new-generation product. Xamarin provides us with a unique code opportunity to meet multiplatform release instead of native development.”

Although originally founded in Turkey as Tekfen Investment Finance Bank, it became known as Burgan Bank after the Burgan Bank Group became its major shareholder in 2012. The Burgan Bank Group is a Kuwait-based financial services group and a leading financial services provider in the Middle East and North Africa (MENA) with three other majority-held subsidiaries in Algeria (Gulf Bank Algeria), Iraq (Bank of Baghdad), and Tunisia (Tunis International Bank).

Burgan Bank doesn’t have a mobile banking channel and they’re trying to build a mobile development team in-house with ROI. They needed to have mobile expertise (such as native mobile development, push notifications, and mobile user telemetry monitoring) because they wanted a cross-platform development solution to provide a consistent application experience across various devices.

There are key elements for Burgan Bank’s mobile application such as performance, maximum code sharing, user experience, and understanding user behaviors. At the same time, they would like to integrate mobile DevOps processes such as continuous integration and continuous delivery for their application packages as company culture.

“Burgan Bank Mobile” is the key project to enable customers to customize their needs based on the financial changes. This helps to establish an optimized solution to integrate API banking facilities to the retail banking market.

Burgan Bank is in the process of developing a business-to-consumer (B2C) mobile application using Xamarin for cross-platform apps. It is working on a mobile banking app for iOS and Android devices using a Xamarin.Forms approach to building mobile apps using C# and delivering fully native mobile app experiences to all major devices, including iOS and Android, with maximum code sharing between platforms.

“There are some key reasons to consider a new mobile application development platform (MADP) to use in the production environment. First of all, duration of shipping the product in real life, then maximum code sharing across platforms without any customization per platform, using existing .NET skills of developers in mobile projects. Xamarin is the key solution providing all benefits all together.” 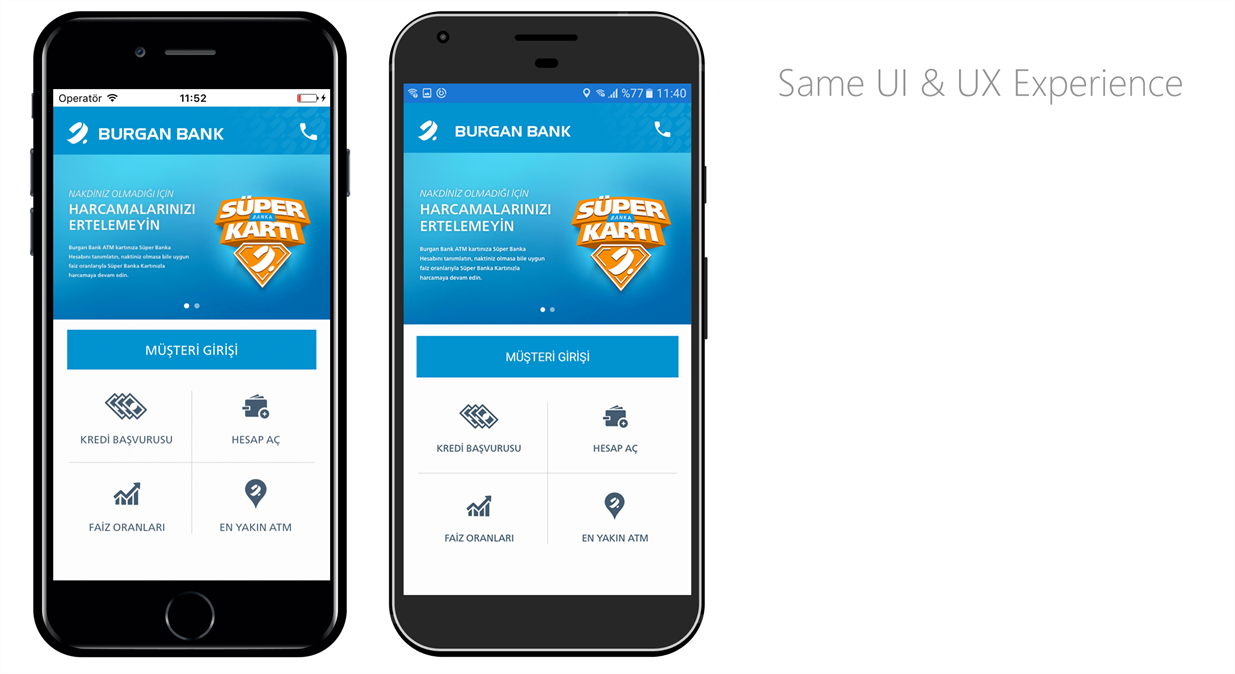 The Xamarin.Forms approach enables developers to take advantage of the productivity and power of .NET to build mobile apps and to use C# to write to the full set of native APIs and mobile capabilities provided by each device platform. This enables developers to easily share common app code across their iOS and Android apps while still delivering fully native experiences for each of the platforms.

The app uses REST API request and response to get or post data. Visual Studio and Xamarin Studio on Mac devices provide a rich mobile development offering that enables existing .NET developers at the bank.

In addition, the Burgan Bank digital banking and innovation team will create a mechanism to better understand user interactions and application stability by incorporating HockeyApp crash reporting and analytics. The team is also able to incorporate an innovative feature in the final product using Xamarin Profiler and Xamarin Test Cloud.

Xamarin Profiler integrates seamlessly with an existing Xamarin toolchain to collect information about your Xamarin apps. You can use it to find memory leaks, resolve performance bottlenecks, and add polish to your apps before getting them out the door.

“When I started working on Xamarin.Forms applications two years ago, Xamarin was moving with baby steps. Now when I look back at platform development progress to today, it has evolved into a strong and capable platform providing anything you can expect from a successful mobile application.” 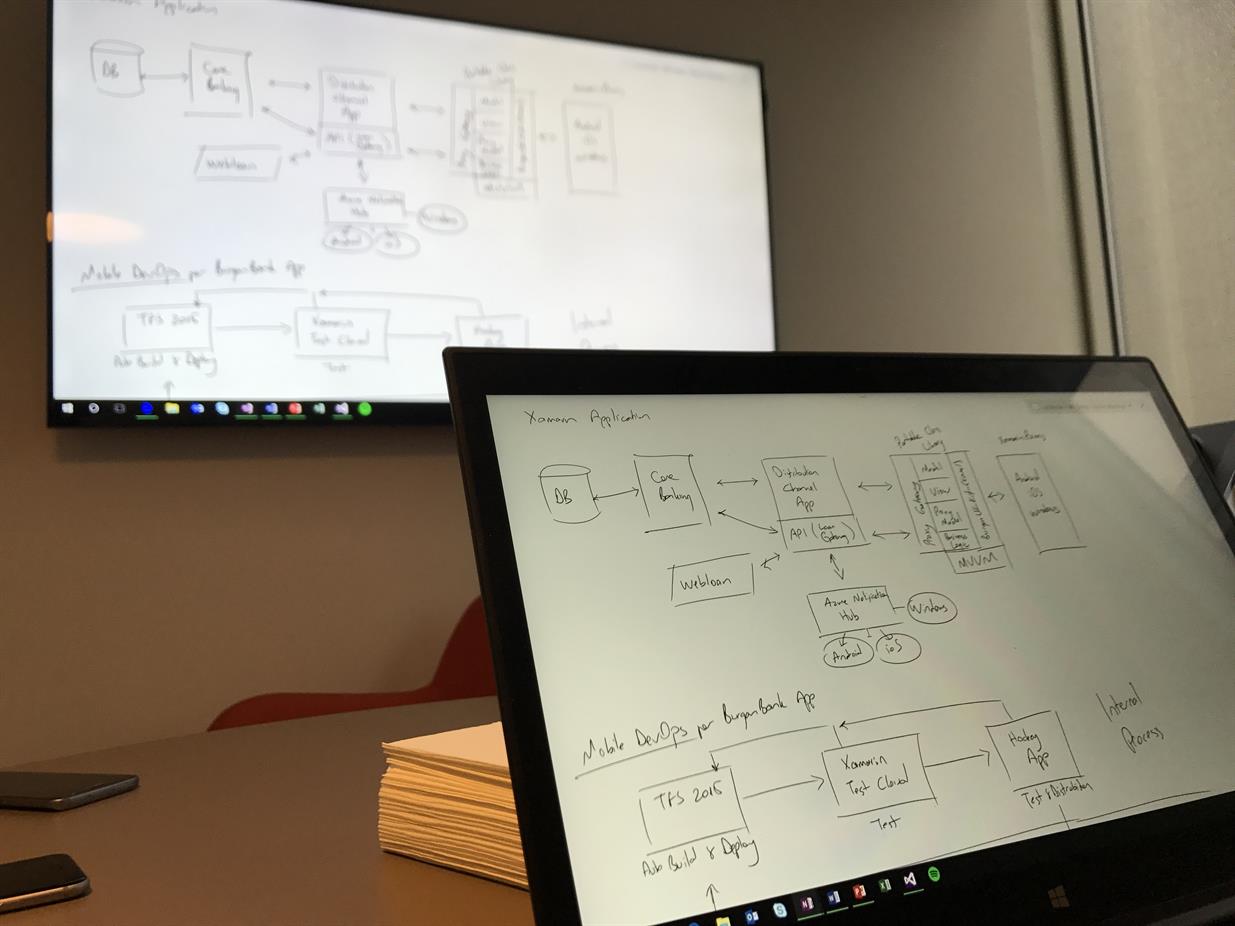 Because this will be a banking application, Burgan Bank has started to build a user acceptance testing (UAT) platform with fake data using their existing banking environment during development. Burgan Bank also started designing their solution architecture to make it ready for production, so all systems have started using their internal resources.

Burgan Bank decided to build their first mobile banking application in order to connect existing back-end systems with their mobile front end. In addition to their existing back end, the team planned to integrate Azure cloud services. 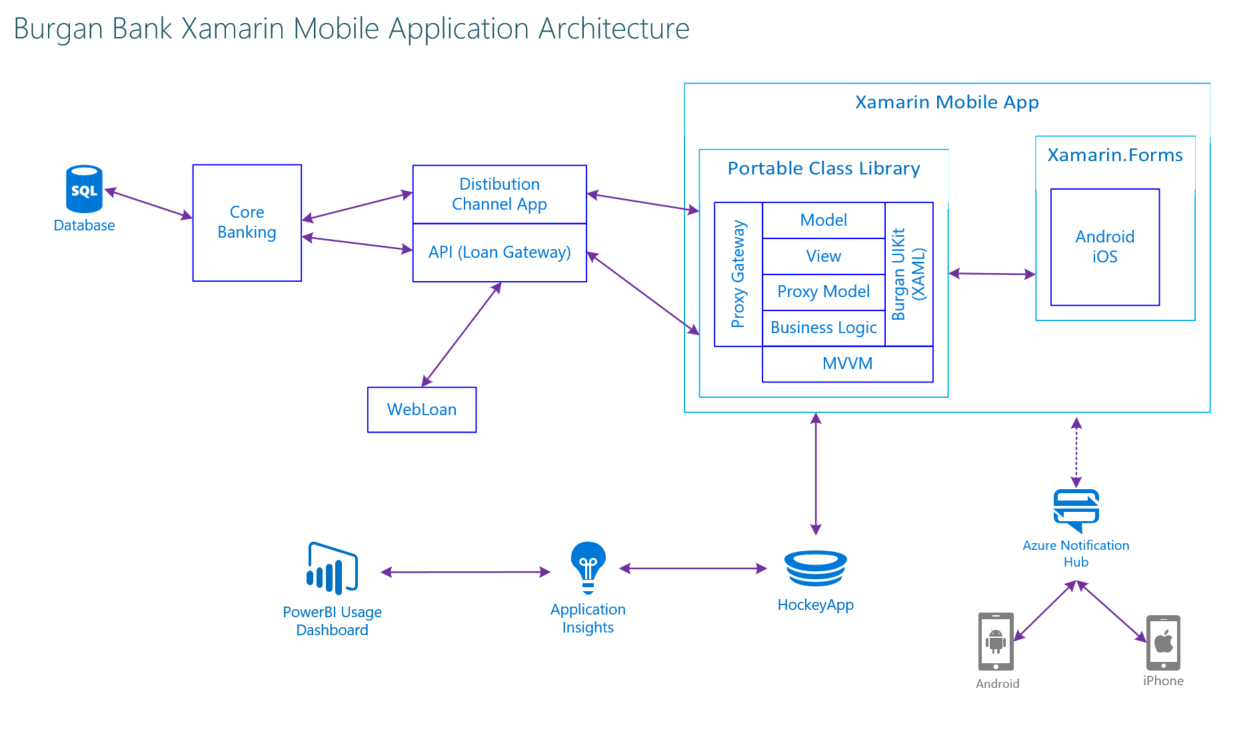 Banking regulations in Turkey prohibit the storage of personal and banking data outside of Turkey. While we were working on this mobile app, we considered scenarios in which we could use Azure and we’ll explain those below. 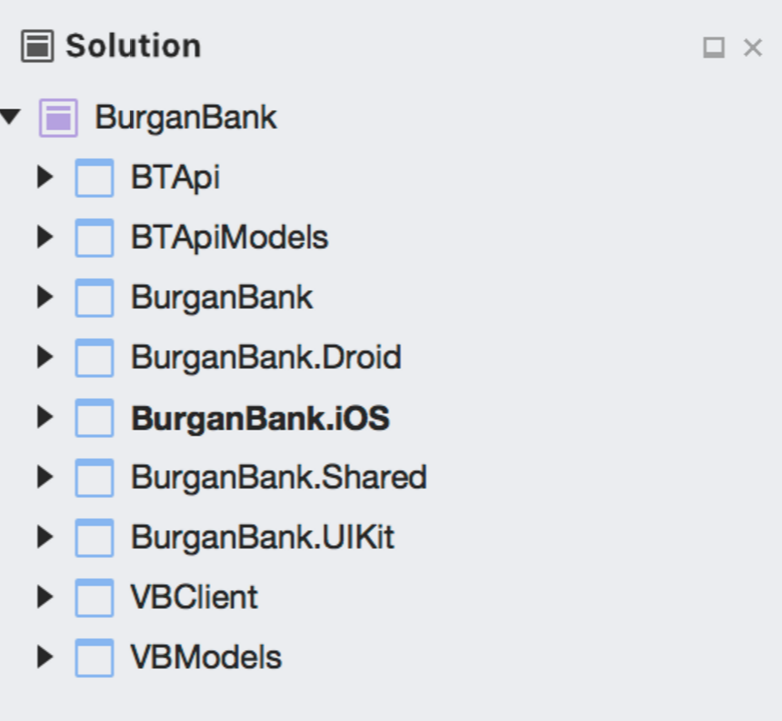 In order to retrieve data from several resources, the project solution looks like the structure above, including the Xamarin.Forms project and other services.

Core common features for this solution have been compiled in a sample by technical evangelist (and author of this report), Ibrahim Kivanc: Firarperest Project

Burgan Bank created an account on GitHub to share their learnings. They also wanted it to be a good example of how a bank can be open to grow a community of developers: Burgan Bank Turkey Mobile GitHub Account

Burgan Bank used the same customized look and feel for both platforms. To implement these kinds of modifications, they dived deep into XAML code. XAML is a markup language for Xamarin.Forms projects.

“We’re proud of sharing our Xamarin learnings with other developers. BurganBankUIKit GitHub Project is available on GitHub for all developers.”

In Xamarin.Forms, you can provide the same common experiences between platforms using XAML customization. Burgan Bank used the same look-and-feel experience in their application views. This is an important ask from business units to provide a unified support script for call centers if any need for support occurs. 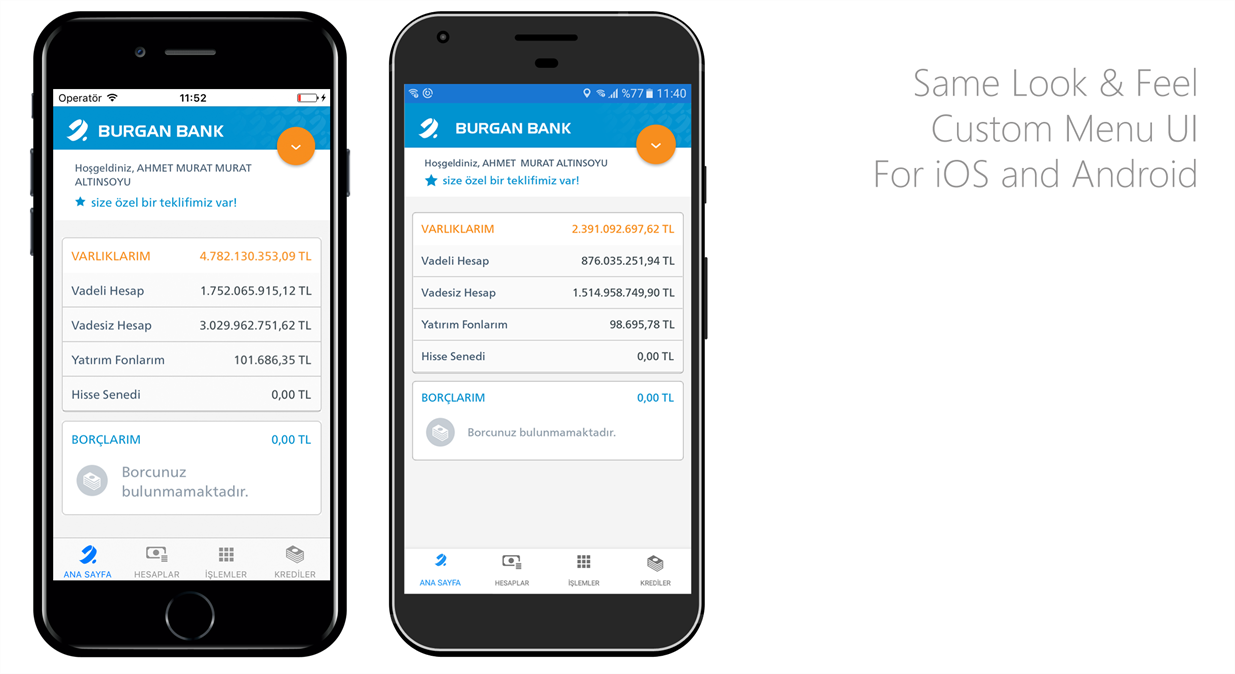 Xamarin.Forms only has common UI elements between platforms. There may be some custom element needs that do not exist due to implementation scenarios. Burgan Bank needed a search menu with its hamburger menu. They implemented the following code snippet to have a search bar on top of the menu. It dynamically filters the results. 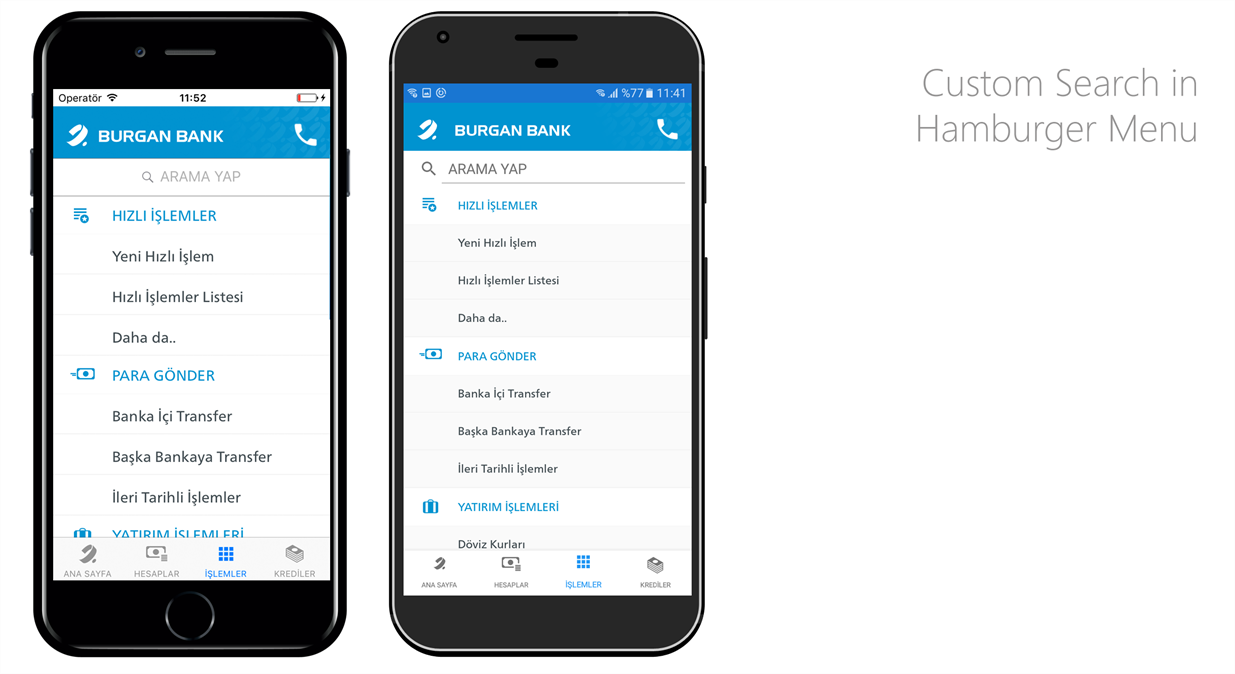 Here is the code sample for the expandable animated menu list with search bar:

Usage in a page:

Whenever the user clicks Entry, the Entry label moves above with an animation.

Usage in a page:

Here is the code sample for the expandable menu UI: 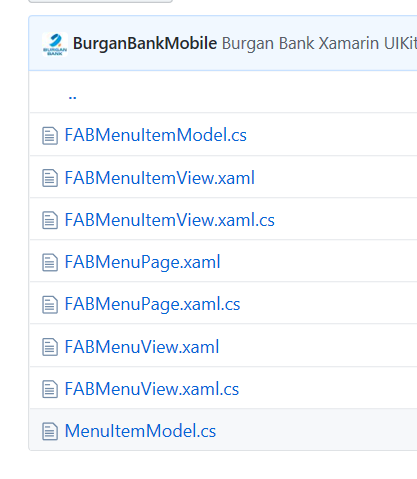 Almost 100 percent of the code has been shared between Android and iOS projects, with only some platform-specific needs solved by implementing into related project folders. These include retrieving SMS content on Android, push notification to Android and iOS, and UI blur effect when the app is running in the background.

Pressing the home button sends the application to the background. This is a need for a banking application and it’s available only on the iOS platform. That’s why this is integrated only into the iOS part of the Xamarin project.

An iOS-specific code sample for C#:

Burgan Bank used Azure Notification Hubs to send push notifications to Android and iOS devices. After creating this service on Azure, on the Xamarin code side below code snippets were integrated to register devices for notification listening and notification receiving.

The team configured Azure Notification Hubs for Android and iOS with the help of these documents:

From the Burgan Azure Notification Hubs settings, the team entered a project ID for Android and uploaded a .p12 certificate for iOS. Then the team took the connection strings to register the app to both receive and send push notifications.

The team added these connection strings to App.xaml.cs in the project.

On Xamarin.Android, the team added the following codes to receive push notifications.

On Xamarin.IOS, the team added the following code snippets to receive push notifications.

Then when the team wants to send campaign push notifications for Android and iOS on the banking mobile app, they use Azure Notification Hubs for sending test messages. 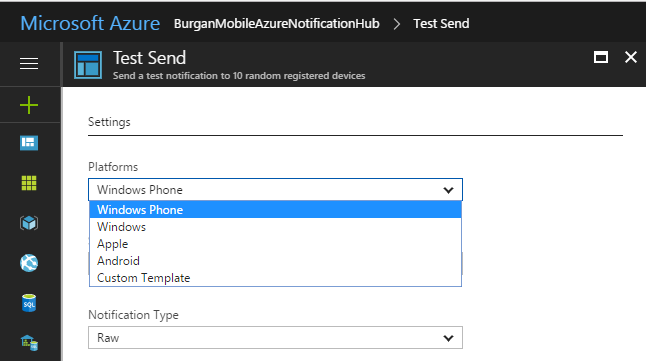 Here is the test push sent from Azure Notification Hubs.

For enabling iOS push notifications, you can check prerequisites for iOS applications and get more information from this documentation on Azure: iOS Push Notifications with Notification Hubs for Xamarin apps.

When Burgan Bank Mobile users log on successfully, the application sends user push registration ID, user information, operating system, version, and date to the back end, where all information for every user is stored.

To send a notification for a specific user, the team wrote a service on the back end to use it. Here are the back-end code snippets for Notification Hubs iOS and Android in the Burgan API:

The Burgan Bank Mobile application supports two languages, Turkish and English. To implement this feature, Burgan Bank used the following code snippet. Due to the device’s language application, language is automatically set with the code sample below.

To build an automated environment for development and minimize the operation process, Burgan Bank decided to build a mobile DevOps environment to run a seamless development process.

App test processes that happen in the cloud and, sometimes, internal test resource accesses are restricted with a firewall. Xamarin Test Cloud firewall is another important element for banking UAT test scenarios to test applications with internal banking data. Xamarin Test Cloud has a static IP to give internal access to these endpoints.

With this project, Burgan Bank powered their omnichannel banking with their first mobile application using Xamarin. They plan to release this application soon. The whole application is running with UAT test environment data and it will be easy to implement with a production environment.