Today’s datacenter oriented applications, which include most popular services running in the cloud today, are composed of highly complex, distributed software stacks. For instance, they typically incorporate Event Hub or Kafka to robustly journal input and interactions for recoverability, log important information to stores like Azure blobs for debuggability, and use extremely expensive mechanisms like distributed transactions, and stateless functions with distributed persistent back-ends, in order to ensure exactly once execution of service code.

In contrast, Ambrosia automatically gives programmers recoverability, high availability, debuggability, upgradability, and exactly once execution, without requiring developers to weave together such complex systems, or use overly expensive mechanisms.

To learn more about Ambrosia’s implementation and performance you can read our whitepaper.

We invite developers wishing to build on or contribute to AMBROSIA to join our gitter community.

Virtual Resiliency is a mechanism in a (possibly distributed) programming and execution environment, typically employing a log, which exploits the replayably deterministic nature and serializability of an application to automatically mask failure.

We use the term virtual resiliency to describe the mechanism in AMBROSIA that allows programmers to write their applications in a failure oblivious way, removing the need for application writers to write logic for recovery or state protection. Data processing systems, which typically express their queries in SQL variants, have provided their query writers virtual resiliency for decades. Map-reduce systems, which don’t necessarily use SQL, also provide this capability. Note that in all these cases, this feature leverages the ability to deterministically replay, like AMBROSIA.

The basic building blocks of AMBROSIA are Immortals, reliable distributed objects that communicate through RPCs. An Immortal defines a set of persistent state and a set of RPC handlers that operate on that state. An instance of an Immortal is a named entity that maintains state and executes RPC handlers according to the Immortal’s definition. An AMBROSIA application often has multiple instances of the same Immortal; for example, an application may define a single “job” Immortal for running a data-processing job and run multiple instances of that job operating on different data sets.

The figure below outlines the basic architecture of an AMBROSIA application, showing two communicating AMBROSIA services, called Immortals. Each inner box in the figure represents a separate process running as part of the Immortal. Each instance of an Immortal exists as a software object and thread of control running inside of an application process. An Immortal instance communicates with other Immortal instances through an Immortal Coordinator process, which durably logs the instance’s RPCs and encapsulates the low-level networking required to send RPCs. The position of requests in the log determines the order in which they are submitted to the application process for execution and then re-execution upon recovery. 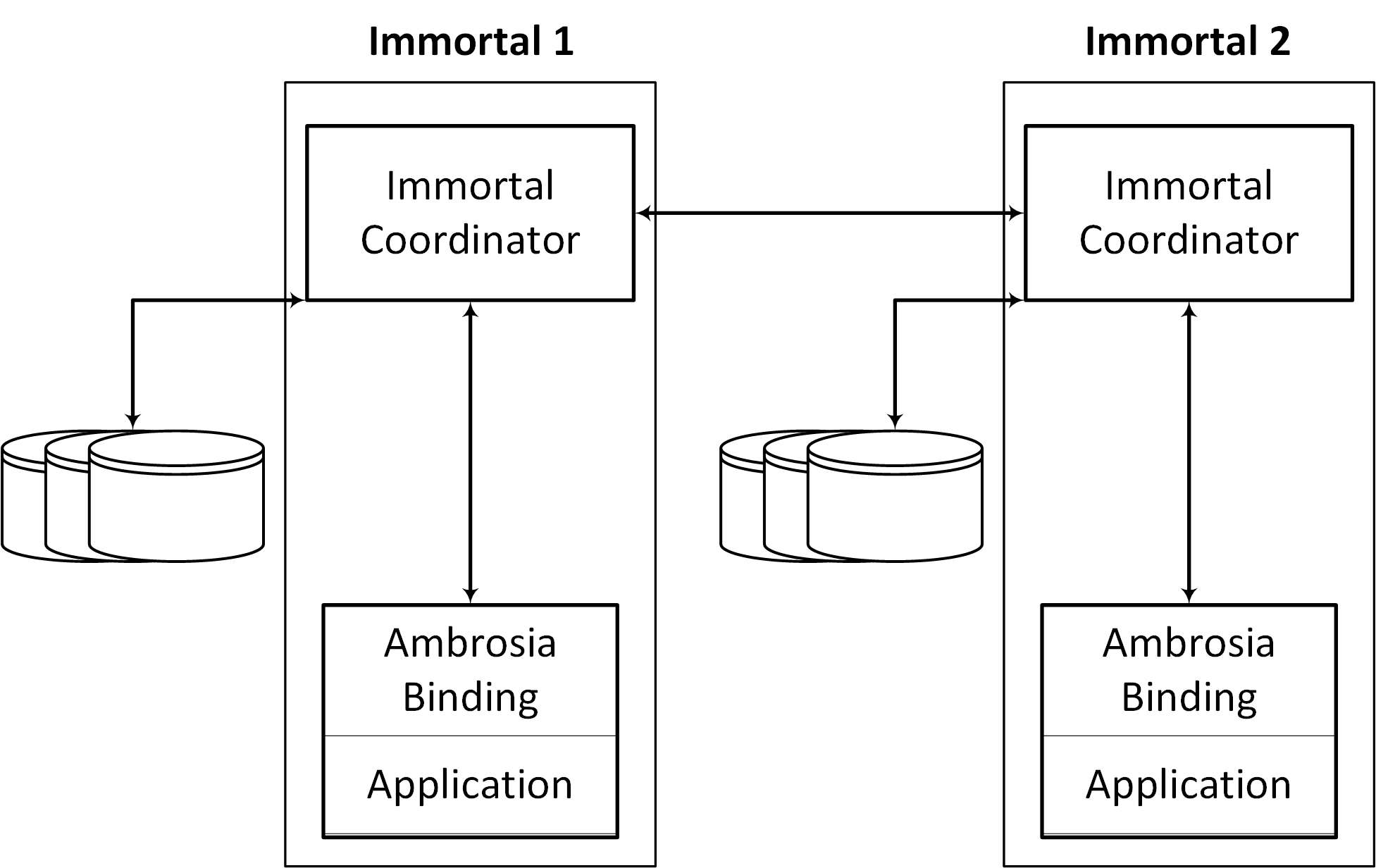 In addition, the language specific AMBROSIA binding provides a state serializer. To avoid replaying from the start of the service during recovery, the Immortal Coordinator occasionally checkpoints the state of the Immortal, which includes the application state. The way this serialization is provided can vary from language to language, or even amongst bindings for the same language.

Here is a list of features that AMBROSIA provides to application developers and deployers:

AMBROSIA currently requires an Azure subscription to write its logs to replicated storage. In the future, we anticipate abstracting this component out to be able to use other storage options for logs.

AMBROSIA currently supports C# on both .NET Core and .NET Framework. We plan to expand this support with AMBROSIA bindings for other languages in the future.