Upgrading to a new version of MRTK

The 2.4.0 release has some changes that may impact application projects. Breaking change details, including mitigation guidance, can be found in the Updating 2.3.0 to 2.4.0 article.

At this time, it is not supported to switch between using .unitypackage files and NuGet.

Starting with 2.4.0, it is strongly recommended to run the migration tool after getting the MRTK update* to auto-fix and upgrade from deprecated components and adjust to breaking changes. The migration tool is part of the Tools package.

For the smoothest upgrade path, please use the following steps.

If your project was created using the Mixed Reality Toolkit NuGet packages, please use the following steps.

The MixedRealityToolkit folders have been renamed and moved into a common hierarchy in version 2.4. If an application uses hard coded paths to MRTK resources, they will need to be updated per the following table.

This version of MRTK modifies the steps required for eye gaze setup. The 'IsEyeTrackingEnabled' checkbox can be found in the gaze settings of the input pointer profile. Checking this box will enable eye based gaze, rather then the default head based gaze.

For more information on these changes and complete instructions for eye tracking setup, please see the eye tracking article.

There are no plans to add properties to WindowsApiChecker for future API contract versions.

The gltf mesh primitive attributes used to be settable, they are now read-only. Their values will be set once when deserialized.

Previously custom button icons required assigning a new material to the button's quad renderer. This is no longer necessary and we recommend moving custom icon textures into an IconSet. Existing custom materials and icons are preserved. However they will be less optimal until upgraded. To upgrade the assets on all buttons in the project to the new recommended format, use the ButtonConfigHelperMigrationHandler. (Mixed Reality Toolkit -> Utilities -> Migration Window -> Migration Handler Selection -> Microsoft.MixedReality.Toolkit.Utilities.ButtonConfigHelperMigrationHandler) 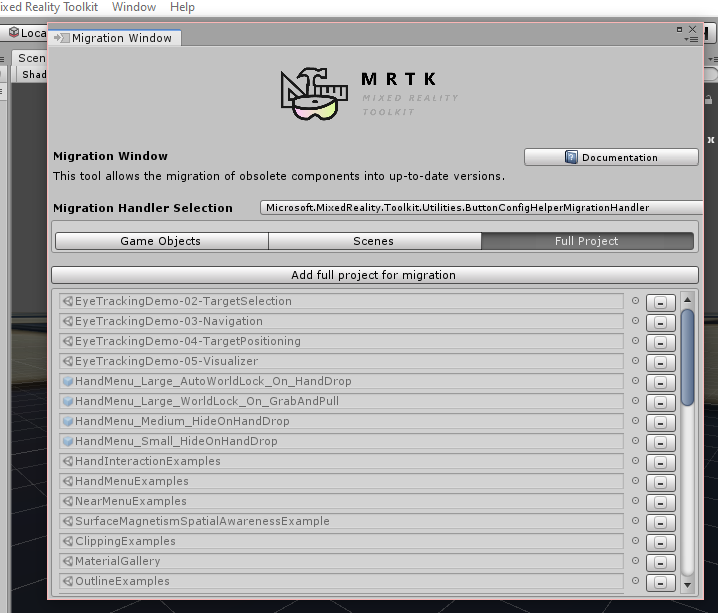 If an icon is not found in the default icon set during migration, a custom icon set will be created in MixedRealityToolkit.Generated/CustomIconSets. A dialog will indicate that this has taken place.

The private ControllerPoseSynchronizer.handedness field has been marked as obsolete. This should have minimal impact on applications as the field is not visible outside of its class.

The public ControllerPoseSynchronizer.Handedness property's setter has been removed (#7012).

The ScriptingUtilities class has been marked as obsolete and has been replaced by ScriptUtilities, in the Microsoft.MixedReality.Toolkit.Editor.Utilities assembly. The new class refines previous behavior and adds support for removing scripting definitions.

While existing code will continue to function in version 2.3.0, it is recommended to update to the new class.

Spatial observers built upon the BaseSpatialObserver class now honor the value of StartupBehavior when re-enabled (#6919).

No changes are required to take advantage of this fix.

Application code may require updating due to this change.

This method previously took in a specific, Unity-defined experimental enum. It now takes in an MRTK-defined enum that's identical to the Unity enum. This change helps prepare the MRTK for Unity's future boundary APIs.

To better describe the requirements for supporting a profile, the MixedRealityServiceProfileAttribute has been updated to add an optional collection of excluded types. As part of this change, the ServiceType property has been changed from Type to Type[] and been renamed to RequiredTypes.

A second property, ExcludedTypes has also been added.

IMixedRealityMouseDeviceManager has been added CursorSpeed and WheelSpeed properties. These properties allow applications to specify a multiplier value by which the speed of the cursor and wheel, respectively will be scaled.

This is a breaking change and requires existing mouse device manager implementations to be modified .

The MouseInputProfile property has been marked as obsolete and will be removed from a future version of the Microsoft Mixed Reality Toolkit. It is recommended that application code no longer use this property.

The following methods and properties have been deprecated and will be removed from a future version of the Microsoft Mixed Reality Toolkit. The recommendation is to update application code per the guidance contained in the Obsolete attribute and displayed in the console.

The hand mesh and joint visualizations now have a separate editor and player settings. The hand tracking profile has been updated to allow for setting these visualizations to; Nothing, Everything, Editor or Player.

Custom hand tracking profiles may need to be updated to work correctly with version 2.1.0.

For more information on these changes, please see the input simulation service article.

The mouse data provider profile has been updated to expose the new CursorSpeed and WheelSpeed properties. Existing custom profiles will automatically have default values provided. When the profile is saved, these new values will be persisted.

Some axes and input types have been updated in 2.1.0, especially around the OpenVR platform. Please be sure to select MixedRealityToolkit -> Utilities -> Update -> Controller Mapping Profiles when upgrading. This will update any custom Controller Mapping Profiles with the updated axes and data, while leaving your custom-assigned input actions intact.

Between the RC2 and 2.0.0 releases of the Microsoft Mixed Reality Toolkit, changes were made that may impact existing projects. This document describes those changes and how to update projects to the 2.0.0 release.

Since the release of RC2, there have been a number of API changes including some that may break existing projects. The following sections describe the changes that have occurred between the RC2 and 2.0.0 releases.

The following public properties on the MixedRealityToolkit object have been deprecated.

To access extension services, use MixedRealityServiceRegistry.TryGetService<T>. To access data providers, cast the service instance to IMixedRealityDataProviderAccess and use GetDataProvider<T>.

Use MixedRealityServiceRegistry or CoreServices instead for the following deprecated properties

The CoreServices class is the replacement for the static system accessors (ex: BoundarySystem) found in the MixedRealityToolkit object.

The MixedRealityToolkit system accessors have been deprecated in version 2.0.0 and will be removed in a future release of the MRTK.

The following code example illustrates the old and the new pattern.

Using the new CoreSystem class will ensure that your application code will not need updating if you change the application to use a different service registrar (ex: one of the experimental service managers).

With the addition of the IMixedRealityRaycastProvider, the input system configuration profile was changed. If you have a custom profile, you may receive the errors in the following image when you run your application.

To fix these, please add an IMixedRealityRaycastProvider instance to your input system profile.

Motivation behind the change

The old event system API Register and Unregister could potentially cause multiple issues in runtime, main being:

The following method(s) have been renamed to better describe their usage.

Based on customer feedback, support for easy removal of previously observed spatial awareness data has been added.

Some solver components and the SolverHandler manager class has changed to fix various bugs and for more intuitive usage.

The ClippingSphere interface has changed to mirror the APIs found in the ClippingBox and ClippingPlane.

The PointerClickHandler class has been deprecated. The PointerHandler should be used instead, it provides the same functionality.

The HoloLens clicker's controller mappings have changed from being an unhanded WindowsMixedRealityController to being an unhanded WindowsMixedRealityGGVHand. To account for this, an automatic updater will run the first time you open your ControllerMapping profile. Please open any custom profiles at least once after upgrading to 2.0.0 in order to trigger this one-time migration step.

HandInteractionPanZoom has been moved to the UI namespace as it was not an input component. HandPanEventData has also been moved into this namespace, and simplified to correspond with other UI event data.

In The 2.0.0 release, all of the official Mixed Reality Toolkit assembly names and their associated assembly definition (.asmdef) files have been updated to fit the following pattern.

In some instances, multiple assemblies have been merged to create better unity of their contents. If your project uses custom .asmdef files, they may require updating.