What is the Debug Adapter Protocol?

It takes a significant effort to implement the UI for a new debugger for features like:

Typically this work must be repeated for each development tool, as each tool uses different APIs for implementing its user interface. This results in lots of duplicated functionality (and implementation) as visualized by the blue boxes in the following picture: 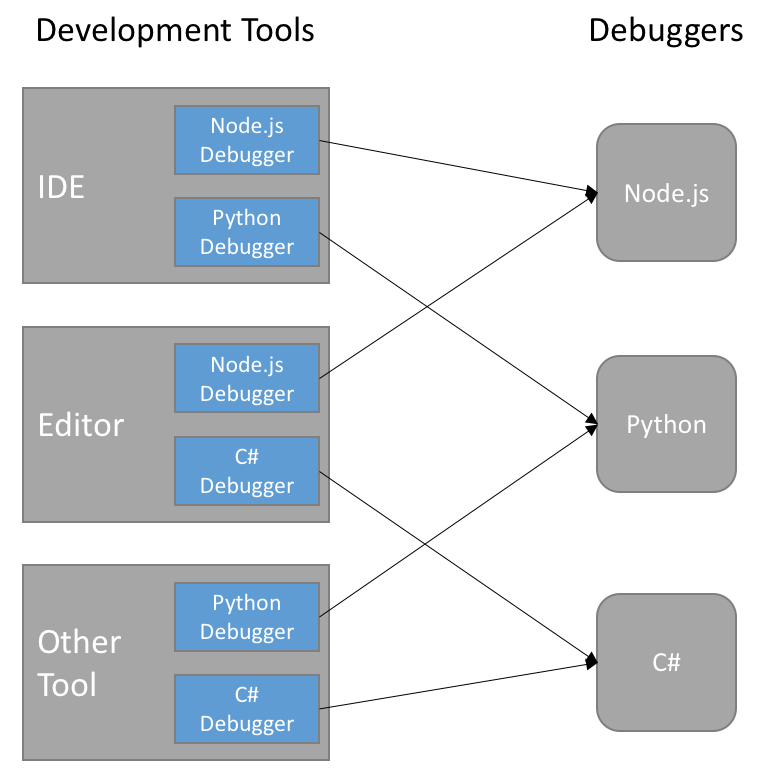 The idea behind the Debug Adapter Protocol is to standardize an abstract protocol for how a development tool communicates with concrete debuggers.

A similar approach was already introduced in 2016 with the Language Server Protocol which standardized an abstract protocol between an editor or IDE and a server providing “language smartness.” 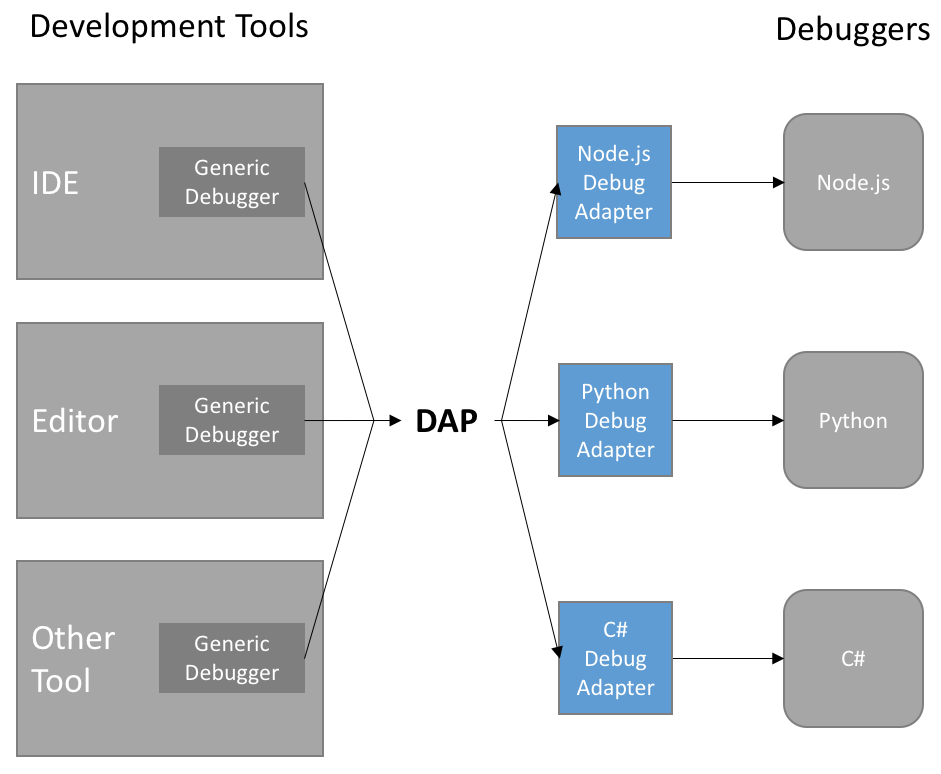 The diagram shows that the Debug Adapter Protocol makes it possible to implement a single generic debugger UI per development tool and that Debug Adapters can be re-used across these tools. This reduces the effort to support a new debugger considerably.

Standardizing on a wire-protocol instead of an API and a client library has the advantage that a debug adapter can be implemented in the language most suitable for the given debugger or runtime.

Since the Debug Adapter Protocol was designed for supporting the debugging UI in a language agnostic way, it is fairly high-level and does not have to surface all the fine details of the underlying language and low-level debugger API. The most important data type used in the protocol are strings, because that’s what the end user will see in the UI. So Debug Adapters typically aggregate information received via debugger APIs into high-level, string-based data-structures that are directly consumed in the UI of the development tool. Since this mapping is mostly straightforward and has little complexity, Debug adapters can be developed with minimal effort.

The Debug Adapter Protocol is a win for both debugger/runtime providers and tooling vendors!

A development tool has basically two ways of interacting with a debug adapter:

After establishing a connection to the debug adapter, the development tool starts communicating with the adapter via the base protocol.

The base protocol exchanges messages that consist of a header and a content part (comparable to HTTP). The header and content part are separated by a \r\n (carriage return, line feed).

Since both the last header field and the overall header itself are each terminated with \r\n, and since the header is mandatory, the content part of a message is always preceded (and uniquely identified) by two \r\n sequences.

Currently only a single header field is supported and required:

The header part is encoded using the ‘ASCII’ encoding. This includes the \r\n separating the header and content part.

This example shows the JSON for the DAP next request:

The Debug Adapter Protocol defines many features and this number is still growing, albeit slowly. However, the protocol is still at its first version because it was an explicit design goal to support new feature in a completely backward compatible way. Making this possible without version numbers requires that every new feature gets a corresponding flag that lets a development tool know whether a debug adapter supports the feature or not. The absence of the flag always means that the feature is not supported.

A single feature and its corresponding flag is called a “capability” in the Debug Adapter Protocol. The open-ended set of all features flags is called DAP’s “capabilities.”

The development tool capabilities are provided in the InitializeRequestArguments structure of the initialize request and typically start with the prefix supports. Other pieces of information passed from the tool to the debug adapter are:

After the debug adapter has been initialized, it is ready to accept requests for starting debugging. Two requests exist for this:

Since arguments for both requests are highly dependent on a specific debugger and debug adapter implementation, the Debug Adapter Protocol does not specify any arguments for these requests. Instead, the development tool is expected to get information about debugger specific arguments from elsewhere (e.g. contributed by some plugin or extension mechanism) and to build a UI and validation mechanism on top of that.

In response to the initialized event, the development tool sends the configuration information using these requests:

The following sequence diagram summarizes the sequence of requests and events for a hypothetical gdb debug adapter: 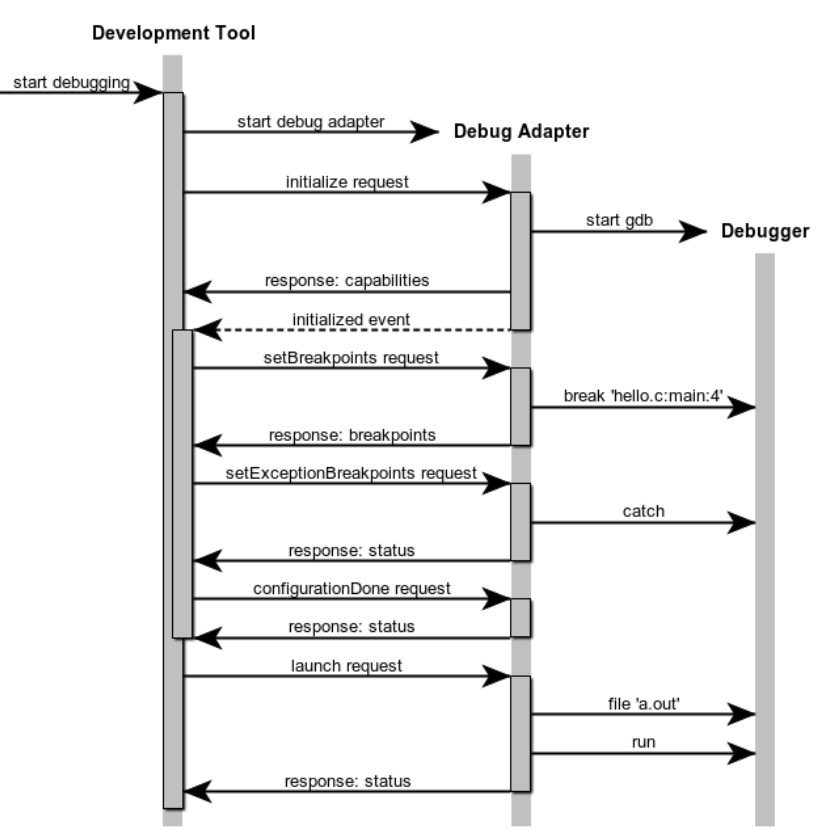 Whenever the program stops (on program entry, because a breakpoint was hit, an exception occurred, or the user requested execution to be paused), the debug adapter sends a stopped event with the appropriate reason and thread id.

The value of variables can be modified through the setVariable request.

After a successful launch or attach, the development tool requests the baseline of currently existing threads with the threads request and then starts to listen for thread events to detect new or terminated threads. Even if a debug adapter does not support multiple threads, it must implement the threads request and return a single (dummy) thread. The thread id must be used in all requests which refer to a thread, e.g. stacktrace, pause, continue, next, stepIn, and stepOut.

When the development tool ends a debug session, the sequence of events is slightly different based on whether the session has been initially “launched” or “attached”:

In all situations where a debug adapter wants to end the debug session, a terminated event must be fired.

If the debuggee has ended (and the debug adapter is able to detect this), an optional exited event can be issued to return the exit code to the development tool.

This diagram summarizes the sequence of request and events for a hypothetical debug adapter for gdb: 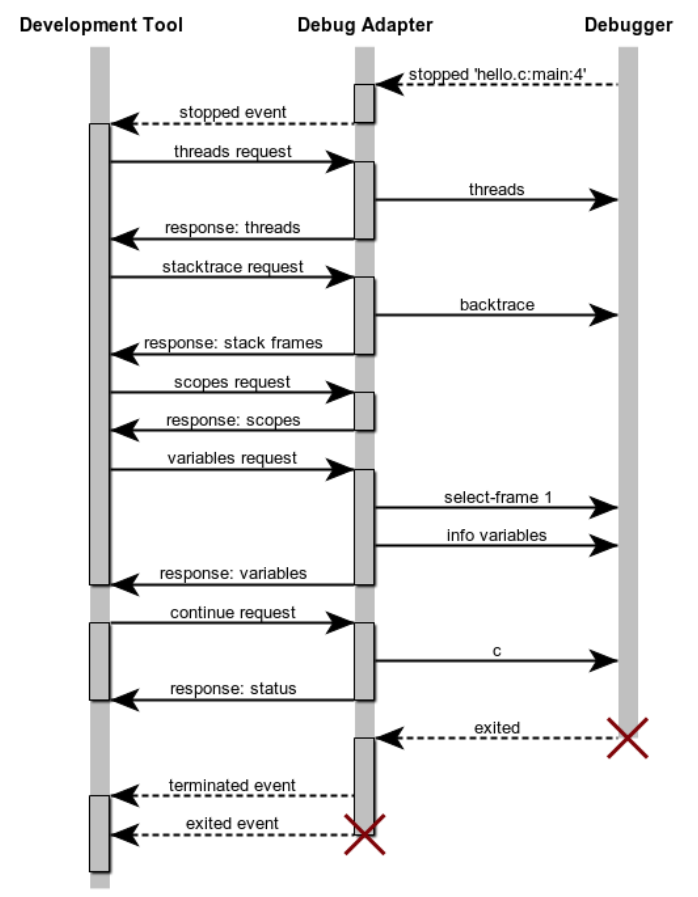 To simplify the implementation of debug adapters, there are libraries or SDKs: