ReactXP was developed by the Skype team at Microsoft as a way to improve development agility and efficiency. In this article, I’ll talk more about the architecture of the new Skype app. 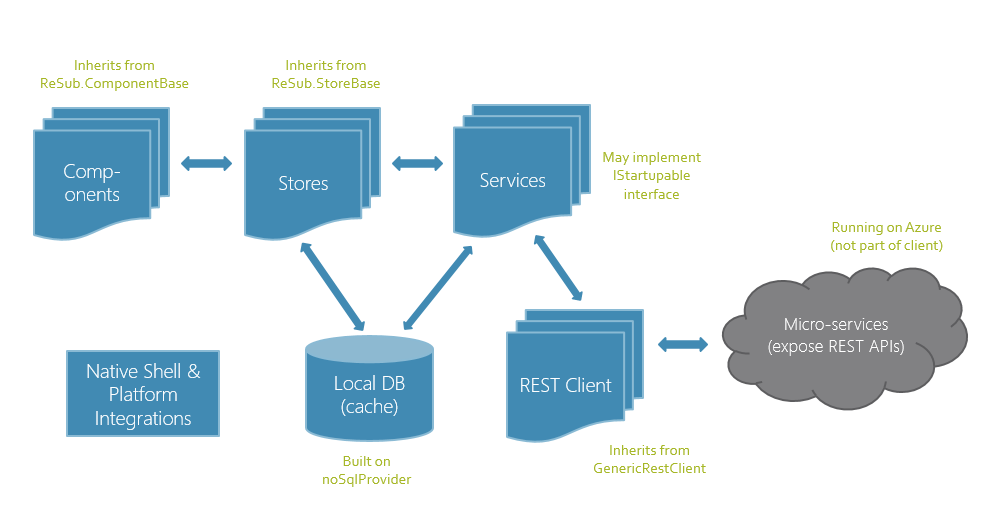 We initially tried using Flux, an architectural pattern created by Facebook engineers. We liked some of its properties, but we found it cumbersome because it required us to implement a bunch of helper classes (dispatcher, actions, action creators). State management also became hard to manage within our more complex components. For these reasons, we developed a new mechanism that we call ReSub, short for “React Subscriptions”. ReSub provides coarse-grained data binding between components and stores, and it automates the process of subscribing and unsubscribing. More details and sample code can be found on the ReSub github site.

Some stores within the app are singleton objects and are allocated — and perhaps even populated — at startup time. Others are allocated on demand and have a well-defined lifetime that corresponds to a user interaction or mode.

Stores are responsible for maintaining in-memory data representations. We also had the need to persist data in a structured manner. Storing data locally allows the app to run in “offline” mode. It also allows for fast startup, since we don’t need to wait for data to download over the network.

For local storage, we developed a cross-platform no-SQL database abstraction. It uses the native database implementation for each platform (sqlite for iOS, indexDB for some browsers, etc.). The abstraction allows us to create and query multiple tables. Each table can have multiple indexes, including composite (multi-key) indexes. It also supports transactions and string indexing for full text searches.

Background tasks, such as fetching new messages, are handled by modules we refer to as “Services”. These are singleton objects that are instantiated at app startup time. Some services are responsible for updating stores and saving information to the local database. Others are responsible for listening to one or more other stores and synthesizing information from those stores (e.g. notifications that are generated for incoming messages that require the user’s immediate attention).

At startup time, the app needs to instantiate all of its singleton stores and services, some of which have dependencies on others. To facilitate this startup process, we created a startup manager. Each store or service that wants to be started must implement an interface called “IStartupable”, which includes a “startup” method that returns a promise. Modules register themselves with the startup manager and specify which other modules (if any) they depend upon. This allows the startup manager to run startup routines in parallel. Once a startup promise is resolved, it unblocks the startup of any dependent modules. This continues until all registered modules have been started.

Here is a startup routine that populates its store with data from the database. Note that the startup routine returns a promise, which isn’t resolved until after the async database access is completed.

Communicating with the REST of the World

Skype is built upon over a dozen different micro-services that run on Azure. For example, one micro-service handles message delivery, another handles the storage and retrieval of photos and videos, and yet another provides dynamic updates of emoticon packs. Each micro-service exposes its functionality through a simple REST API. For each service, we implement a REST Client that exposes the API to the rest of the app. Each REST Client is a subclass of the Simple REST Client, which handles retry logic, authentication, and setting of HTTP header values.

The Skype app runs on a wide variety of devices from phones to desktop PCs with large screens. It is able to adapt to screen size (and orientation) changes at runtime. This is mostly the responsibility of components at the upper layers of the view hierarchy, which change their behavior based on the available screen width. They subscribe to a store that we call “ResponsiveWidthStore”. Despite its name, this store also tracks the screen (or window) height and the device orientation (landscape vs portrait).

As is common with most responsive websites, we defined several “break point” widths. In our case, we chose three such break points, meaning that our app works in one of four different responsive “modes”.

Here is some code that demonstrates the typical flow. We start with an event handler within a button.

The NavigationActions module then updates the current navigation context. It needs to handle both the stack and composite cases.

This causes the NavigationStateStore to update its internal state and trigger a change, which notifies any subscribers.

The primary subscriber to the NavigationStateStore is a component called RootNavigationView. It is responsible for rendering either a RootStackNavigationView or RootCompositeNavigationView.