How to build Cordova Projects with VS offline

As part of improving our test automation, we decided it would be useful to enable Visual Studio to build Cordova projects without access to the internet. We’ve decided to share the fruits of that effort in the hopes it might be useful to others. The following is a guide on how to create an environment that allows limited offline development of Cordova projects in Visual Studio.

In order to create an offline build environment, we need to take resources from an internet connected machine, pack them up, and deploy them to a target machine. There are a few things we need:

At the end of the blog post, there’s a project with a few scripts that show how most of the process can be automated.

Gather resources from a source machine

First, we should ensure we have NPM installed on our source machine. And, to ensure we take only what we need, we should start with a clean NPM cache.

Once we’ve done that, we should globally install Cordova, along with any plugins our project is using. We’ll also need the whitelist plugin.

There’s also an NPM package our team wrote to help with the build process. This plugin will already exist on our target machine. However, its dependencies will not. So, we should globally install it so our NPM cache contains its dependencies.

Next, we should install the packages containing the platforms we want to build against. Each Cordova version has a specific set of pinned platform versions. We’ll need exactly these versions of the platform plugins, otherwise VS might try to access the internet to download it. Cordova CLI usually lists the pinned versions of the platforms in their update changelogs. However, if we have trouble finding these lists, we could instead create a Cordova project using the version of the Cordova CLI we want, then add the platforms we’re using. Doing so should give us the pinned version of those platforms.

In certain cases, this directory may also exceed the Windows max path character limit. If that happens, we can download the parts individually and copy them to our temporary directory.

Our temporary directory now contains everything a target machine needs to build offline. Archiving the files isn’t strictly necessary, though doing so aids in transferring the resources to a target machine.

Deploying to a target machine

This is mostly the opposite of what we’ve done, with a few exceptions if we hit max path issues.

Then, we need to un-tar the platform packages to the Cordova cache. The contents of that platform’s .\package.tgz\package.tar should be extracted to %HomePath%\.cordova\lib\[platform name]\cordova\[platform version]. For example, the Cordova Windows platform we downloaded earlier would be extracted to %HomePath%\.cordova\lib\windows\cordova\4.3.1.

Finally, we need to sandbox NPM and Node. If we were able to copy the entire sandboxed directory, we just extract it to the same directory we got it from. If we downloaded the parts individually, copy the files to %AppData%\Microsoft\VisualStudio\MDA\vs-npm\2.15.1 and establish this directory structure.

If everything is in place, VS shouldn’t need to access the internet during a build, unless we specifically invoke a feature that requires the internet (adding a new plugin, for example).

This is all pretty annoying to do every time. We wrote a couple scripts for our test automation that gather, archive, and extract these dependencies. Below is a somewhat simplified version of these scripts. With some tweaking, you may be able to get this to work for your project. But mostly, it should serve as an example of how you might accomplish automating the creation of these offline build archives.

If you want to use the scripts directly, you’ll need 7zip. We use it to handle a few cases where max path might be an issue, and also to un-tar the platforms package.

Building the project will output a zip file and script that can be run on a target machine. The script will install the contents of the archive to the correct places on the target machine. Feel free to modify it to fit your needs!

Something to note: This setup will not work for remote build with iOS. Nothing we’ve done above prepares the remote build machine for offline build.

Let me know if you have any questions, or if you have more tips for preparing an offline build environment.

We recently had a customer reach out to us to help him fix a problem deploying to a local iOS device. Here’s a snippet from his build error:

If you run into a deployment error like the one above, updating XCode should fix the problem.

Update 10 is now available for download. Here is the link:

These new properties remain in your project after the build completes, but are removed the next time you build within VS. Please keep this in mind if you like to combine IDE and CLI development workflows.

Other crashes
We fixed a number of crashes that were reported to us from our crash reporting system.

We want to thank you all again for your comments and feedback!

If you try our update and run into issues, we want to know about it. If you run into any problems with the update, send me an email so we can figure it out.

The ASP.NET team recently released Microsoft ASP.NET Web Tools Preview 1 RC2 which include tooling changes of interest to developers working with Cordova or ASP.NET. Specifically, they’ve updated the version of Node and NPM used by Visual Studio 2015 for NPM package restore and the Task Runner Explorer.

Prior to this update, newer versions of NPM cause some interoperability problems between the Visual Studio Package Manager and the command line, that could affect your Cordova development workflow.

Note: if you don’t want to install the new preview release, you can still configure Visual Studio to use other version of node/npm as described here, however it has not been optimized for NPM 3.x.

Here’s a summary of the two major issues fixed by this preview release, which I think are of interest to Visual Studio TACO developers.

Recent versions of node install recent versions of npm, which use a flat folder (not deeply nested) structure for node_modules that was introduced in npm 3. However, when the same project was opened in Visual Studio TACO it would try to restore using an older sandboxed version of npm. This caused Visual Studio to incorrectly show dependencies as “extraneous”. 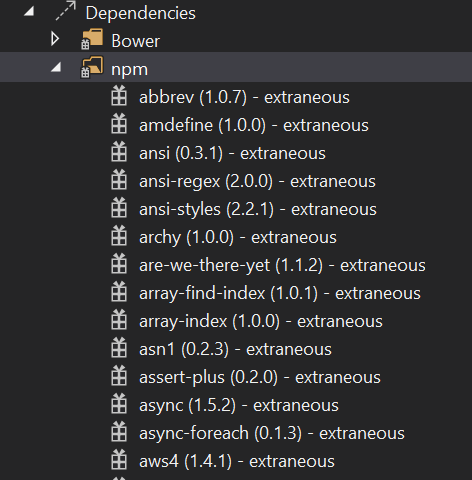 Another common problem you may have seen is an error similar to the following, in the Output Window under the Task runner explorer logs:

Note: You may still run into this issue in the future. The easiest way to fix it is removing the node_modules folder, and let Visual Studio restore them again: Open the solution explorer, find the Dependencies node, right-click and select Restore Packages.

You can get the new version here: Microsoft ASP.NET Web Tools Preview 1 RC2

If you still find any issue restoring packages, or using the Task Runner Explorer, please let us know.

Building for iOS with Visual Studio TACO? How's it going?

Do you use Visual Studio TACO to build iOS applications? If so, I’d like to talk with you to learn more about what your experience has been like! Please, email me: jomatthi -at- microsoft -dot- com, or message me on Twitter and I’ll follow you back to chat (just make it clear why you’re messaging me).

In the TACO team we talk with developers every day and we learn a lot from these conversations; sometimes a simple chat can reveal whole new problems and challenges that we could help ease through tooling. Right now, the VS TACO iOS build experience is my main area of focus and I look forward to hearing your feedback about this!