There is a known compiler issue that impacts applications built for Microsoft HoloLens 2 using ARM64. This issue is fixed by updating Visual Studio 2019 to version 16.8 or later. If you are unable to update Visual Studio, please import the com.microsoft.mixedreality.toolkit.tools package to apply a workaround.

Fixes a bug with Oculus Integration when using UPM

When using UPM, the OculusXRSDKDeviceManagerProfile would always have its prefabs set to None on startup. This release configures the Device Manager to point to a working set of prefabs on startup.

Fixes an issue with OpenXR via UPM

Fixes an issue where the OpenXR providers weren't added to the link.xml by default, causing new projects to fail to run on-device when using OpenXR and MRTK via Unity's Package Manager. Existing projects that are upgraded will still need this added manually.

Fixes a regression with Oculus introduced in 2.5.2

2.5.2 introduced a build issue when integrating the Oculus SDK. This release reverts that issue.

OpenXR in Unity is only supported on Unity 2020.2 and higher.

Currently, it also only supports x64 and ARM64 builds.

Boundary visualizations, like the floor or walls, will now be properly configured and visible at runtime according to the boundary profile.

Support for MSBuild for Unity has been removed as of the 2.5.2 release, to align with Unity's new package guidance.

When imported via the Unity Package Manager, the MRTK Standard Shader utilities scripts (ex: HoverLight.cs) are not co-located with the shader in the Standard Assets package. To access this functionality, applications will require the Foundation package to be imported.

CameraCache may create a new camera on shutdown

In some situations (e.g. when using the LeapMotion provider in the Unity Editor), it is possible for the CameraCache to re-create the MainCamera on shutdown. Please see this issue for more information.

FileNotFoundException when examples are imported via Unity Package Manager

No spatializer was specified. The application will not support Spatial Sound

A "No spatializer was specified" warning will appear if an audio spatializer is not configured. This can occur if no XR package is installed, as Unity includes spatializers in these packages.

To resolve, please ensure that:

NullReferenceException: Object reference not set to an instance of an object (SceneTransitionService.Initialize)

In some situations, opening EyeTrackingDemo-00-RootScene may cause a NullReferenceException in the Initialize method of the SceneTransitionService class. This error is due to the Scene Transition Service's configuration profile being unset. To resolve, please use the following steps:

There is currently a known issue for using the Oculus XR plugin with when targeting Standalone platforms. Check the Oculus bug tracker/forums/release notes for updates.

The bug is signified with this set of 3 errors:

There's a known issue for newer versions of TextMeshPro (1.5.0+ or 2.1.1+), where the default font size for dropdowns and bold font character spacing has been altered. 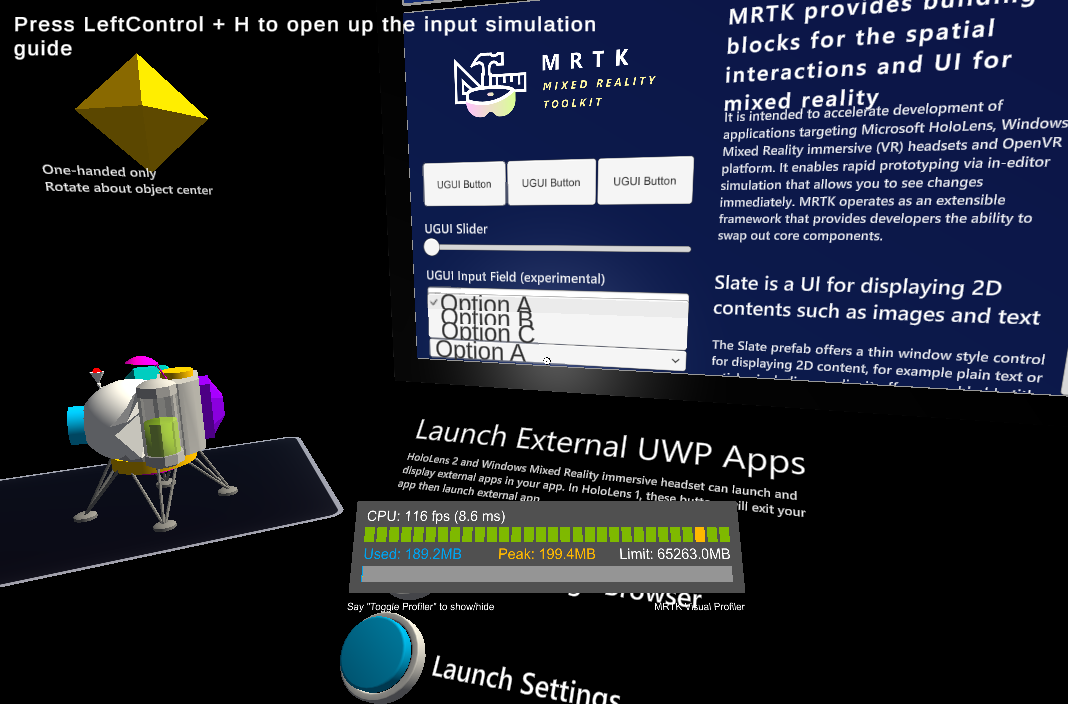 This can be worked around by downgrading to an earlier version of TextMeshPro. See issue #8556 for more details.