This site is obsolete and should be used for reference only. The information in this documentation is not guaranteed to work for Bot Framework SDK versions past 4.9.1.

Overview for achieving OAuth for skills

In azure bot service, a bot can use OAuth to gain access to online resources that require authentication. It’s documented here: Add Authentication to a bot and Bot authentication. When your bot is working as a skill, meaning to your users, instead of talking to your bot directly through various channels, they are actually using your skill as a backend service when talking to another bot/virtual assistant, OAuth is also supported.

In a non-skill scenario, a bot goes through these steps to perform OAuth for users: 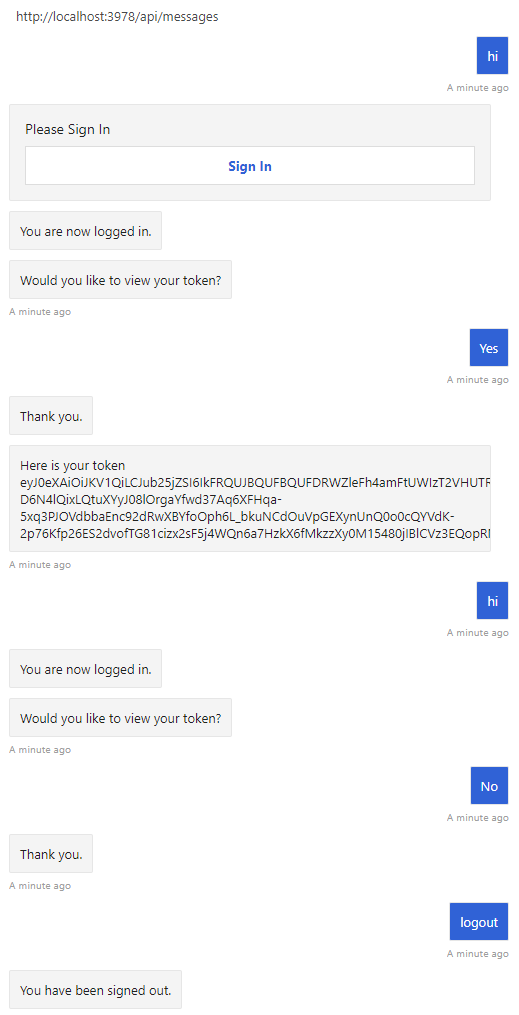 In a skill scenario, the overall flow is the same, with the virtual assistant being transparent, meaning that it would just be passing through the OAuthCard back to user from skill, or magic code back to skill from user. In the case of no magic code, the virtual assistant wouldn’t pass through the actual token because that’ll be considered unsafe (especially in the scenarios of 3rd party skills). In that case the skill will receive the token directly from Azure Bot Service TokenService.

In previous versions of Virtual Assistant Template, we used to use the Virtual Assistant as the component that acts on behalf of skills to retrieve token, and pass it along to skills. Compared to the new approach which is that the skill takes care of its own OAuth flow, it has these disadvantages:

The latest Azure Bot Service has infrastructure built in to support SSO (Single Sign on). Here are the documentation for it:

During development we often run into issues when using OAuth. Here’s some typical errors we get and how to troubleshoot for them