Crystal Tenn (opens new window) and I teamed up to bring an E2E blog series that features an Azure App Service website that communicates with an API project, which communicates to an Azure SQL back-end. The app is a traditional To-Do application based on an existing sample that used ADO.NET, but adapted for Azure deploy and to Visual Studio 2017. The technology/tooling stack is Visual Studio, VSTS, C#, Angular, and SQL.

The process for the app is described below. In Visual Studio, you will start out with a working To Do list application. You will push the code to VSTS (Visual Studio Team Services). Then you will create a CI/CD (Continuous Integration/Continuous Delivery) process in order to deploy to Azure. In Azure you will create 3 resources: Azure Web App, Azure API App, and an Azure SQL Server through this exercise.

Keep in mind : While we won't be going into the deep specifics of how to code, you should be able to use this guide to look at several parts of the Azure technology stack and how you can best implement them in your organization.

# Two ways to skin a cat

We have one Visual Studio Solution and 2 web projects that need to be deployed to Azure. We can tackle this in different ways depending on the operation of our team.

Note: For the simplicity of this little project and to just teach the basics, I am choosing to group these as one solution that gets built as a whole, then I will have one Release that deploys both parts.

1.) Make sure that you've completed the following two steps before moving forward:

The resources must exist before you can complete the CI/CD steps.

2.) Click on the Build tab then hit New Build Definition. 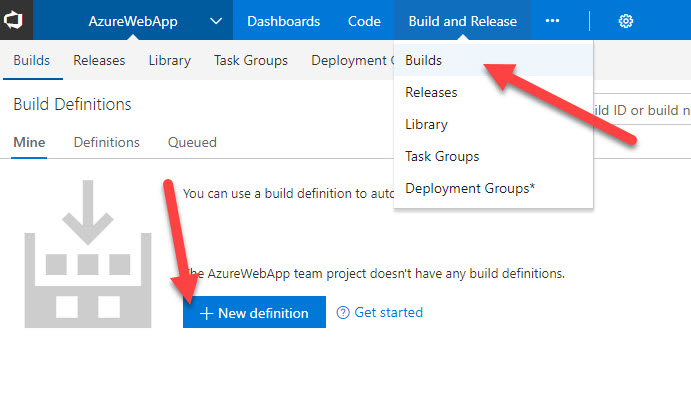 3.) Leave all the defaults and hit Continue. 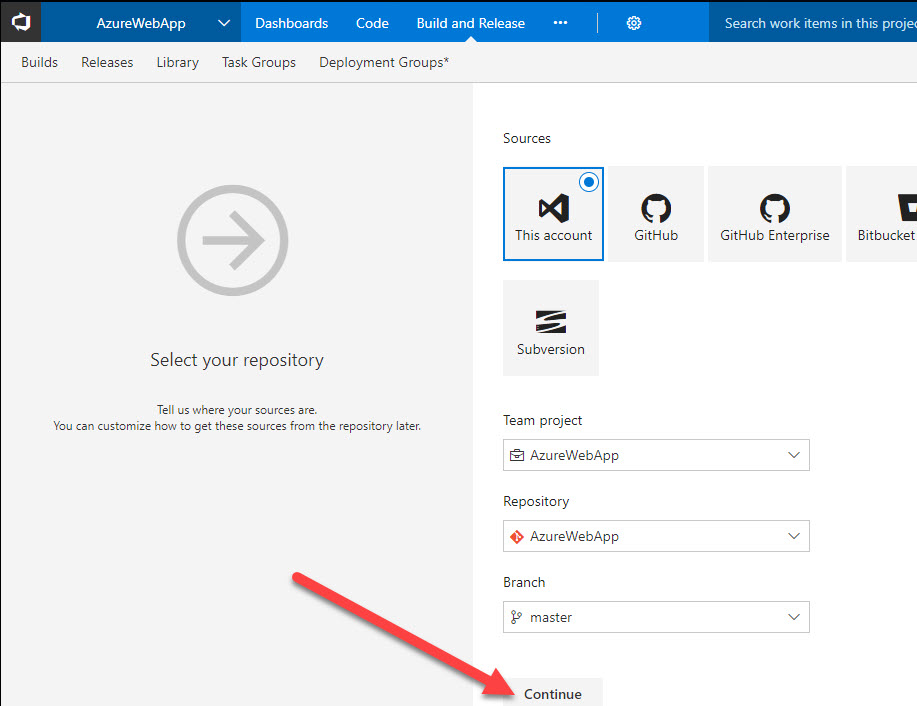 4.) Select the ASP.NET template, mouseover it, and hit Apply. 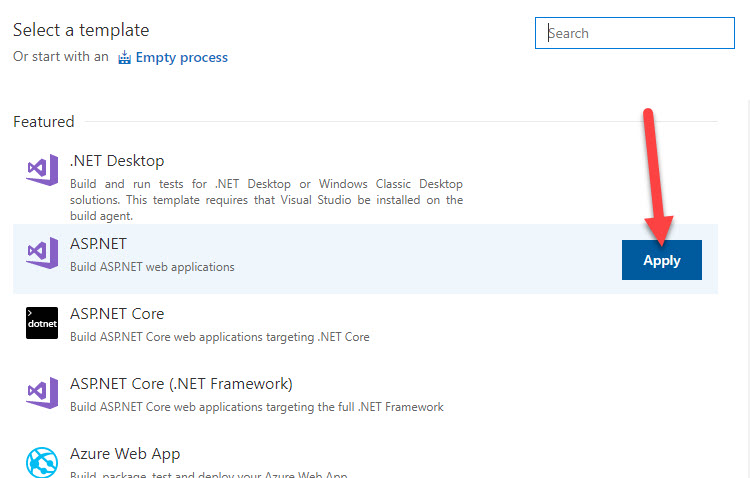 5.) You should see the following on the left, choose Process first. 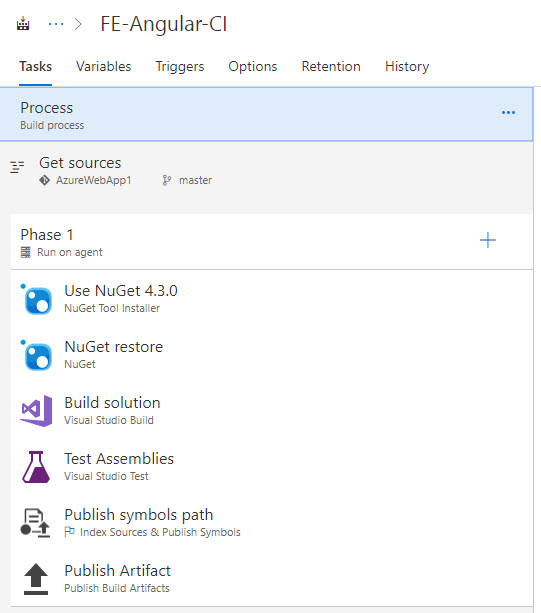 6.) Under process, it will populate a name.

8.) A modal will popup, leave the defaults, hit Save & Queue. 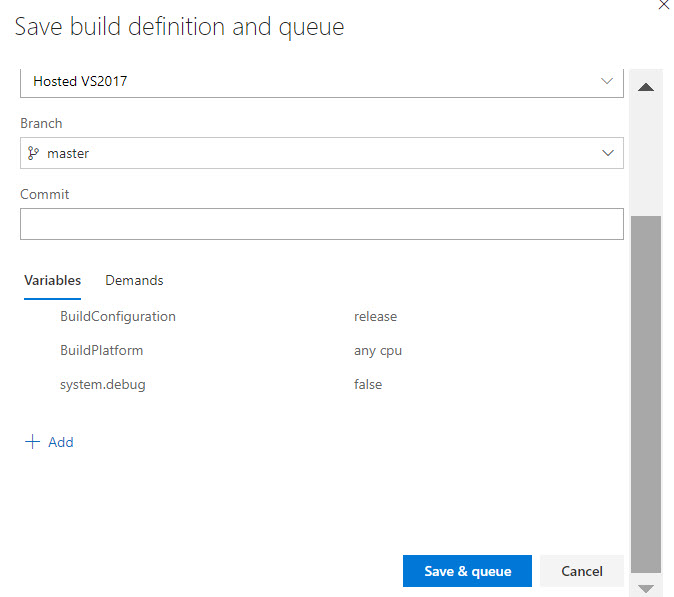 9.) You will see a notification show up with your Build number/name, click on it:

10.) You will be brought to a build screen, wait for it to complete and it will show that the "Build succeeded". 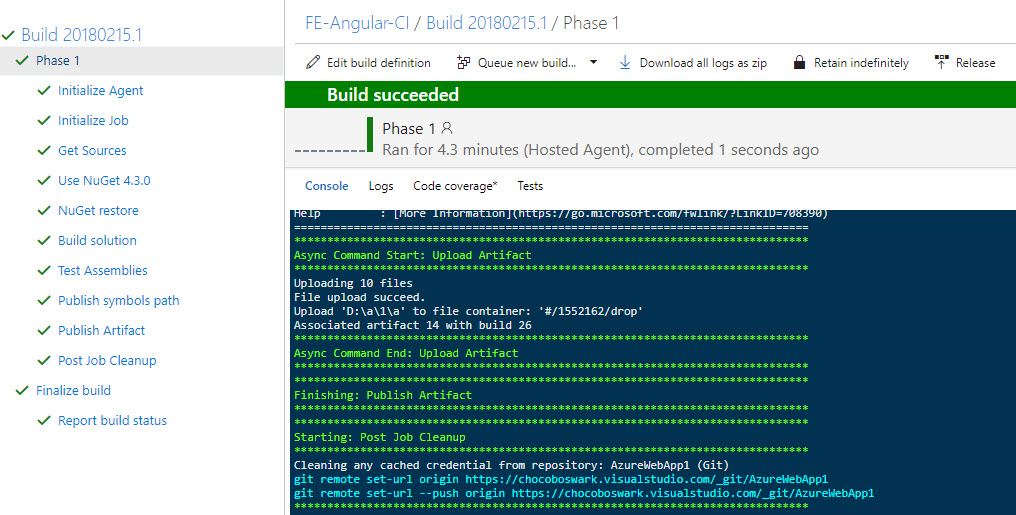