# Prevent secrets from getting out with .NET Core

I was recently building out a .NET Core Console App and it had secrets such as my Bit.ly API key and Azure Storage Table DB Connection string (which also has my password). I got busy and forgot what I was doing and committed it to GitHub. That really sucks, but

# I had options, but didn't take them

For Azure Key Vault, I felt there was some overhead (such as learning it) that I didn't want to pay. It also is a very cheap service, but I wanted FREE. Regarding Secret Manager, that information is always stored in the user profile directory such as %APPDATA%\microsoft\UserSecrets\<userSecretsId>\secrets.json for Windows or ~/.microsoft/usersecrets/<userSecretsId>/secrets.json for Mac/Linux. This means if other folks want to get your key store, they can target those directories b/c the JSON file is unencrypted. Not that my version is encrypted, it just isn't stored in the user profile directory.

# How I Prevent secrets from getting pushed to GitHub with .NET Core 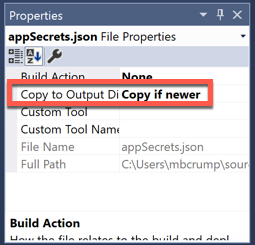 You can now access the value of the string with the following : 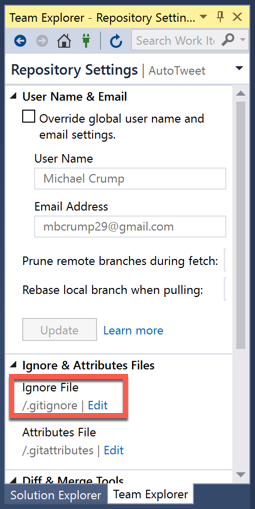 You can verify this file is ignored by looking for the red circle if using Visual Studio.